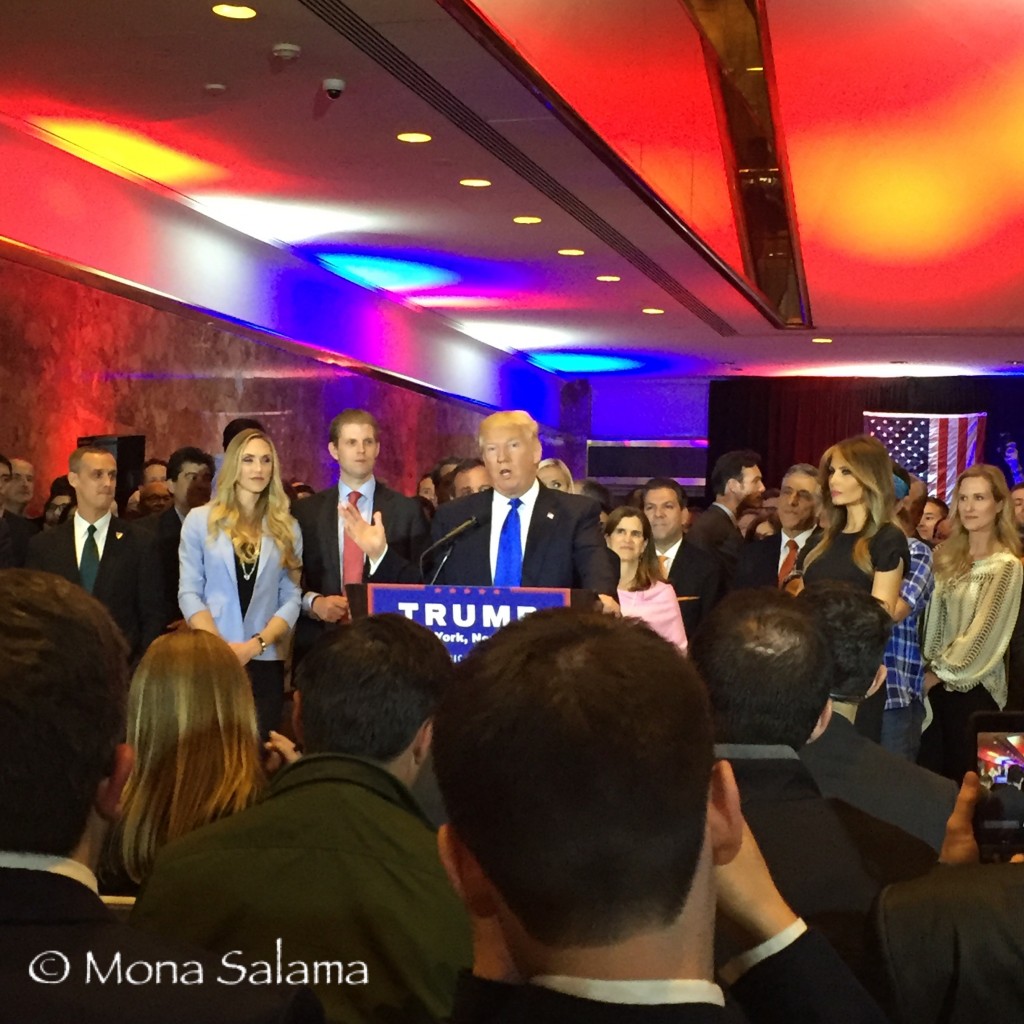 New York, NY. — It was a big night for Donald Trump, who swept all five primaries across the Northeastern coast on Tuesday night, securing a stronger front-runner status and bringing him much closer to securing the nomination before the GOP convention in July.

By 8pm, major news networks and the Associated Press called Trump the winner of Maryland, Pennsylvania, and Connecticut primaries. Rhode Island and Delaware were called shortly after thirty minutes, marking a major victory for Trump as he declared himself the “presumptive nominee” after receiving more than half the votes in all five states.

“When you crack 60 [percent] with three people, that’s very hard to do,” Trump told reporters during his press conference remarks at Trump Towers in Midtown, New York. “I consider myself the presumptive nominee.”

Over the weekend, Trump’s rivals, Ted Cruz and John Kasich formed an alliance as a way to try to block the potential GOP nominee from gaining the 1,237 delegates needed for a first-ballot victory at the Republican convention. However, the newly formed alliance of divide and conquer has shown to be ineffective in the wake of Trump’s landslide victories, especially for Cruz after coming in third in four of the five contests, making him mathematically impossible now to clinch the 1,237 threshold.

With the agreement now publicized, Cruz is now under pressure to beat Trump in Indiana in next week primary. A win from Cruz in Indiana is considered to be the only chance to determine whether the forged alliance is working. As Cruz campaign intensely in Indiana, part of the deal arraigned was for Kasich to step aside to help Cruz undercut Trump. However, there is evidence that the partnership between both is falling apart. As Cruz called the pact “big news” in Indiana, Kasich, on the other hand said the arrangement wasn’t meant to discourage voters from voting for him. “I’ve never told them not to vote for me,” Kasich told reporters. “They ought to vote for me. But I’m not over there campaigning and spending resources.”

Trump commented on the allegiance of his two rivals, stating it was a “strange alliance between both that shows weakness and ineffectiveness. He called on both to drop out so the Republican Party can unite behind him. “I think Governor Kasich and Senator Cruz really hurt themselves with that faulty deal that was defaulted on them before they even started,” Trump said. “What it is, is politicians, all talk no action. “They should drop out, because frankly, they have no path to victory. We should heal the Republican Party; we should bring the Republican Party together.”

Out of the 118 bound delegates up for grabs from Tuesday’s primaries, Trump picked up 105 delegates; bring his total delegate count to 950, according to the AP delegate tracker. Kasich won five delegates, all from Rhode Island, and Cruz won only one. The biggest prize of the night was Pennsylvania, where 54 of the 71 delegates are unbound and are elected as “free agents.” Those chosen by the state’s voters, three each from Pennsylvania’s 18 congressional districts will play the most coveted role at the convention of voting for whomever they want on the initial ballot.

During his victory press conference, Trump set his sights on criticizing the Democratic front-runner Hillary Clinton, who won four out of the five primary states. As Hillary took snipes against Trump during her victory rally, Trump returned fire during his victory speech, foreshadowing a potential general election duel between the two front-runners.

Launching one of his most aggressive attacks so far against Hillary, Trump criticized her record as secretary of state and Senator of New York, citing her email controversy, the Benghazi phone call, and the only advantage Hillary has going for her is seeking to become the first female president. “Frankly if Hillary Clinton were a man, I don’t think she’d get 5% of the vote,” Trump said. “The only thing she has got going is the woman’s card. The beautiful thing is, women don’t like her. Look how well I did with women tonight.”

On Wednesday, Trump is scheduled to deliver a major foreign policy address in Washington, an effort process of advancing his presidential persona and offer more specifics on policy issues as he sets his sights for the general election.