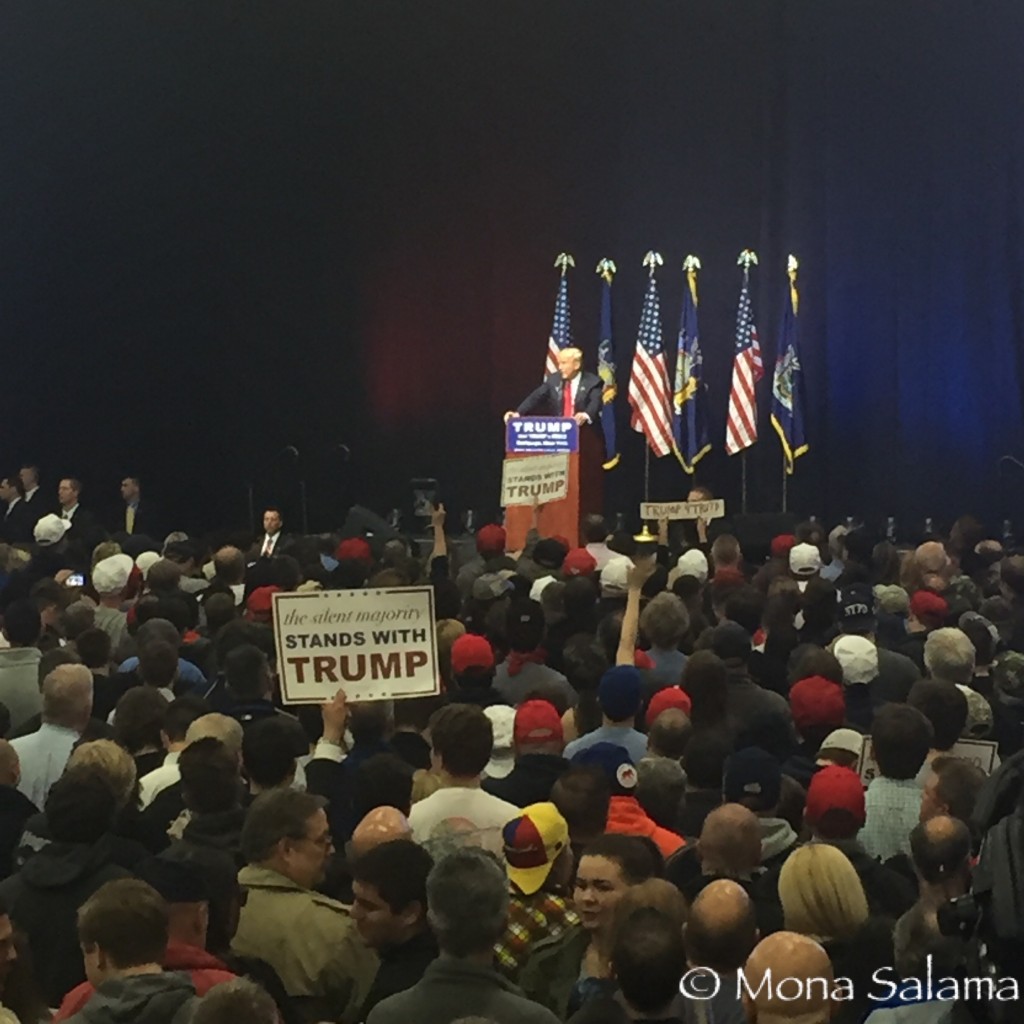 “I love these people, these are my people.”

Entering the stage to the Space Jam song “Get Ready for This,” Trump was welcomed with raucous cheers from over 15,000 who gathered to see the real estate mogul give his first rally outside New York City. New Yorkers from the five boroughs, Nassau and Suffolk County and upstate made the hike to the suburbs of Bethpage to a studio that once filmed the movie “Spider-man” just to see and hear the GOP candidate in person.

Supporters gathered were seen wearing hats and shirts with Trump’s famous campaign slogan “Make America Great Again” as they cheered “Trump, Trump” and “Build That Wall” from inside the shuttle bus provided by Trump’s campaign to attend the event rally to give Trump a homecoming welcome after losing the Wisconsin primary to the hands of Cruz. Without mention Wisconsin, Trump focused on New York, with most of his remarks focused on knocking his rival the Texas Senator. 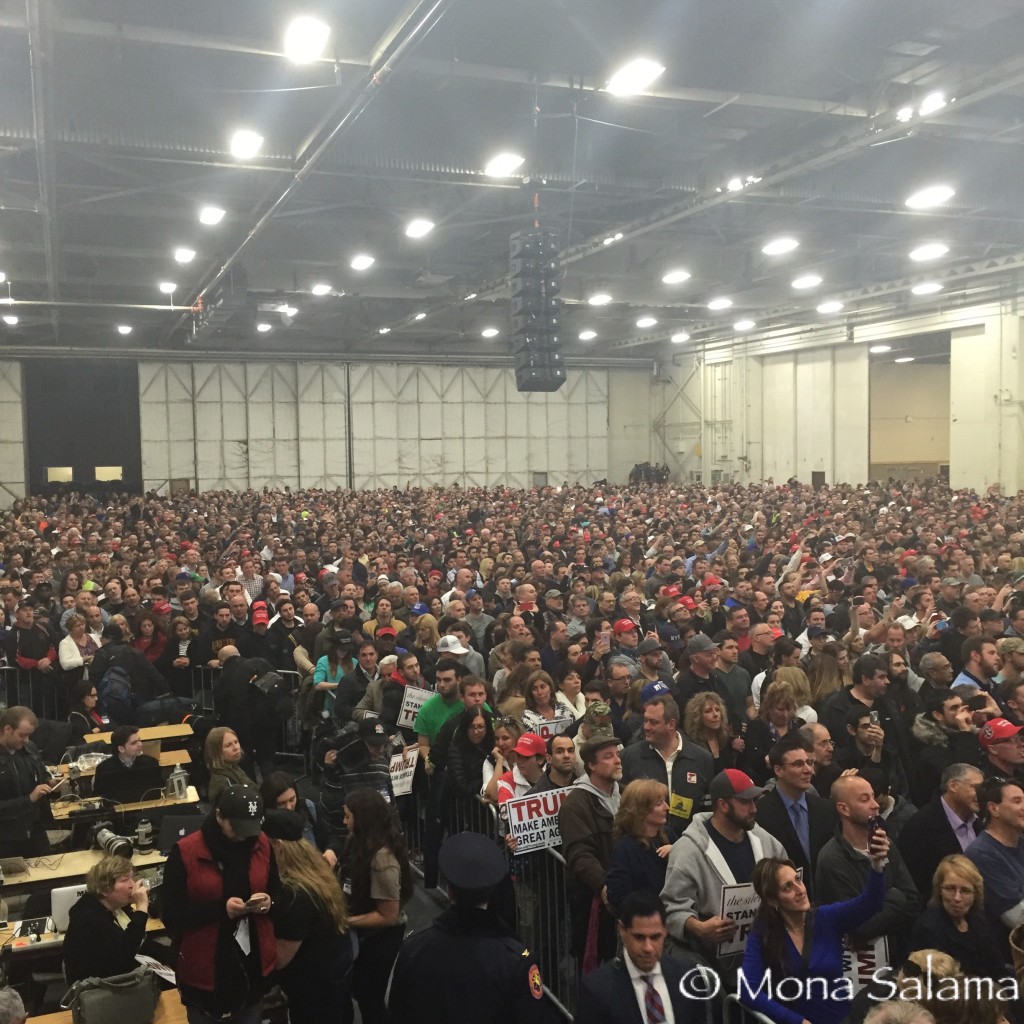 During the hour event, Trump invoked the heroism of the first responders during the 9/11 terror attacks, taking a swipe at Ted Cruz for his “New York Values” comment. In January, Cruz attacked Trump by mentioning the real estate mogul has “New York Values” by pointing to his recent history of supporting abortion and donating money to Democratic candidates.

“Do you remember during the debate, when he started lecturing me on New York values? Trump asked the crowd which led to loud boo. “Like we are no good? I looked at him and started talking about our incredible police, our incredible firefighters and I started talking to him about the World Trade Center, the bravery, the incredible bravery of everybody. There was never anything like it in the history of this country, the worst attack in the history of the United States. The bravery that we felt was incredible.”

Trump continues on,”We all know people who died and I’ve got this guy standing over there looking at me and talking to me about New York values with scorn on his face, with hatred of New York,” Trump said. “So folks, I think you can forget about him.”

Before Trump’s rally, Cruz fresh off his win in Wisconsin held a smaller event in the Bronx. Trump tore into Cruz event, mimicking how his event was a flunk due to the number of people in attendance.

“You know, lyin’ Ted came today to New York, and he couldn’t draw 100 people,” Trump said, as the crowd began shouting “Lyin’ Ted!” “How bad is that?” 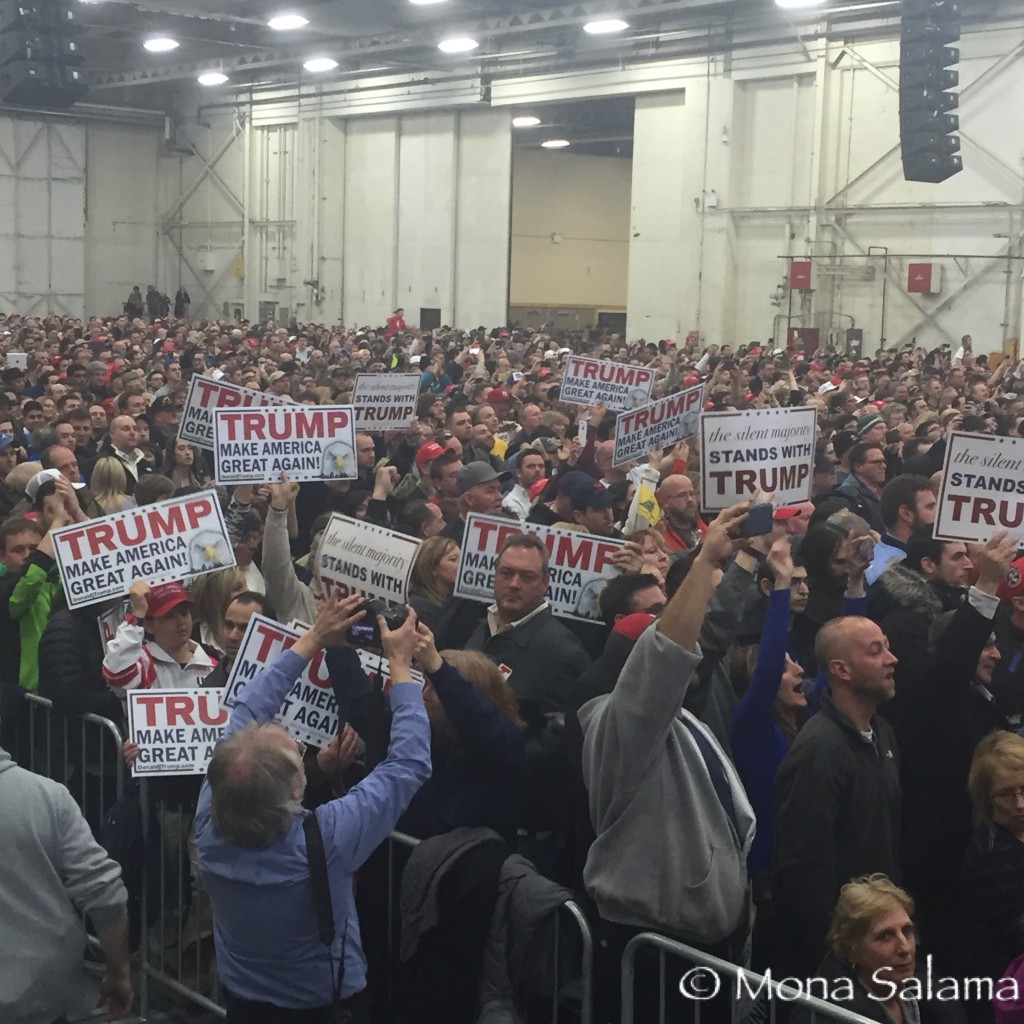 As with any Trump’s event all across the states not only does it draw over thousands to his rally, it also draws a large crowd of protestors outside with a few lucky able to get inside to get their 15 seconds of fame when they cause a scene. In this event, the protestors were held back behind gates a mile away from where Trump spoke. As for inside, one two times was the event interrupted briefly by a protestor who was able to enter the event, attempting to shout their hatred towards Trump, but was made inaudible as the crowd encircled the protestor and began drowning out the protestors with chants of “Trump!, Trump!, Trump!” The front-runner warned his supporters from the stage not to hurt the protestors as he told the secret service and officers to “get him out.”

A Monmouth University poll released on Wednesday has Trump garnishing 52% of Republican voters surveyed with Ohio Governor John Kasich having 25%. Cruz is in third place with 17% of the polled voters.

In the delegate count, Trump has 743 out of the 1,237 needed to clinch the nomination. Cruz now with his victory in Wisconsin is less than 200 behind Trump with 510 delegates. With New York and the Northeast primaries upcoming in April, states that are shown to help give Trump the push closer to the nomination, both Cruz and Kasich are trying to stop that by chipping away delegates to prevent the front-runner from reaching the threshold before the convention in July.

U.S. Troops Still Taking Their Lives while Protecting Ours