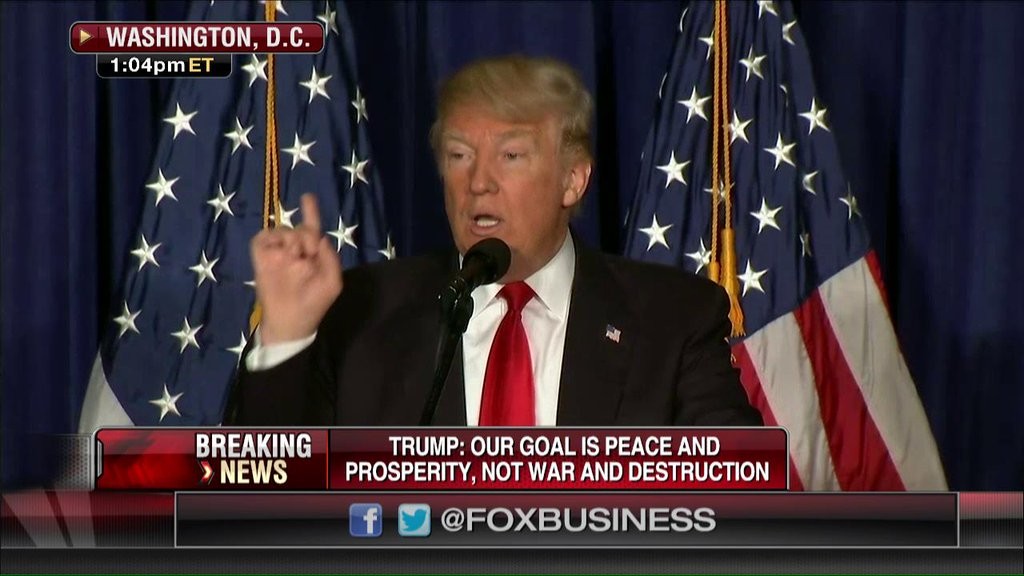 After a clean sweep of the Acela primary the night before, Trump declared himself the “presumptive GOP nominee” and has set the stage for a brutal general election clash between him and Democratic front-runner Hillary Clinton. Trump speech focused mostly aiming his criticism directly towards President Obama and Hillary Clinton while offering a “coherent foreign policy based upon American interests” when becoming president. He claims the “legacy of the Obama-Clinton interventions” has “weakened our military by weakening our economy” with its “reckless and rudderless”policy that “bows to America’s enemies” while “disliking our friends.”

During his 45 minute teleprompter remarks, Trump outlined five main weaknesses in America’s foreign policy. On military resources, Trump blamed President Obama for weakening the military by crippling America with wasteful spending and causing a huge trade deficit. “President Obama has weakened our military by weakening our economy,” Trump said. “Ending the theft of American jobs will give us the resources we need to rebuild our military and regain our financial independence and strength.”

Trump argued for the need to rebuild our military, which is desperately in need of modernization and renewal.as China and Russia expand their military capability in a rapid pace. “Our military is depleted, and we’re asking our generals and military leaders to worry about global warming,” Trump stated. “We will spend what we need to rebuild our military. It is the cheapest investment we can make. We will develop, build and purchase the best equipment known to mankind. Our military dominance must be unquestioned.”

The second outline focused on NATO and our allies not contributing its part for defense. “NATO, for instance, only 4 of 28 other member countries, besides America, are spending the minimum required 2% of GDP on defense,” Trump said. “We have spent trillions of dollars… to provide a strong defense for Europe and Asia.”

He added, “The countries we are defending must pay for the cost of this defense – and, if not, the U.S. must be prepared to let these countries defend themselves.”

In late March, Trump dismissed NATO as “obsolete,” and would become a controversial comment after the wake of the Brussel attack. His top rival, Senator Ted Cruz used this sound bite against the front-runner days leading to the Wisconsin primary to show he is weak on foreign affairs. Fast forward to a month later, Trump kept the same tune about NATO, but provided reasoning as to why the organization needs a reorganization. If elected, he stated he would call for summits with America’s NATO and Asian allies to discuss “a rebalancing of financial commitments and to adopt new strategies such as migration and Islamic terrorism.

“After I am elected President, I will also call for a summit with our NATO allies, and a separate summit with our Asian allies,” Trump said. “In these summits, we will not only discuss a rebalancing of financial commitments, but take a fresh look at how we can adopt new strategies for tackling our common challenges… to confront our shared challenges, including migration and Islamic terrorism.”

Trump argued one of his major foreign policy goal is to contain the spread of radical Islam and must be a priority for the U.S. and its allies. “We’re going to be working very closely with our allies in the Muslim world, all of which are at risk from radical Islamic violence,” Trump said. “We should work together with any nation in the region that is threatened by the rise of radical Islam. But this has to be a two-way street – they must also be good to us and remember us and all we are doing for them.”

On Israel and America’s allies, Trump argued that President Obama dislikes our friends while bowing to our enemies. Using the Iran Deal to point out how President Obama treats Iran with “tender love and care” at the expense of Israel, our other allies in the region such as Egypt. Trump pointed out how the disastrous Iran deal made Iran a great power in the Middle East and they ignored its terms before “the ink was dry.”

“Israel, our great friend and the one true Democracy in the Middle East, has been snubbed and criticized by an Administration that lacks moral clarity,” Trump stated. “He supported the ouster of a friendly regime in Egypt that had a longstanding peace treaty with Israel – and then helped bring the Muslim Brotherhood to power in its place. We’ve picked fights with our oldest friends, and now they’re starting to look elsewhere for help.”

On rivals not taking America serious anymore based on President Obama’s action of doing nothing, Trump argued how rival nations are treated with respect after continuously embarrassing the U.S. while our allies disrespect us in return. “We’ve let our rivals and challengers think they can get away with anything, Trump said. “If President Obama’s goal had been to weaken America, he could not have done a better job.”

The final outline death with the lack of a coherent foreign policy since the Cold War. Trump criticized Obama-Clinton interventions as “weakness, confusion, and disarray.” Blasting President Obama and Hillary actions in Iraq, Libya, and Syria that helped create ISIS, Trump blamed President Obama foreign policy disaster for trying to make the Middle East a Western democracies. “It all began with the dangerous idea that we could make Western democracies out of countries that had no experience or interest in becoming a Western Democracy,” Trump said. “We went from mistakes in Iraq to Egypt to Libya, to President Obama’s line in the sand in Syria. Each of these actions have helped to throw the region into chaos, and gave ISIS the space it needs to grow and prosper.”

Trump closed his remarks expanding on his trademark slogan: “We must make America respected again and we will make America great again,” he stated. “And if we do that, perhaps this century can be the most peaceful and prosperous the world has ever, ever known.”