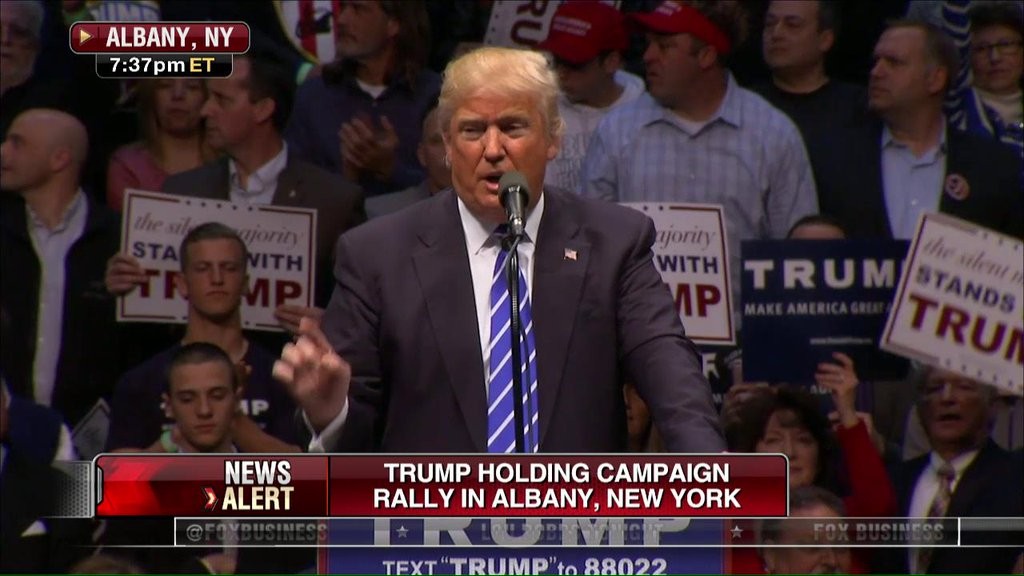 “We found out in Colorado this is not a democracy like we’re supposed to have,” Trump said at Albany’s Times Union Center in downtown Albany. “The system, folks, is rigged. It’s a rigged, disgusting, dirty system.”

Trump’s main rival, Senator Ted Cruz swept all 34 delegates in Colorado over a complex process where delegates were picked on both congressional and statewide level that lasted for over several days. The Rocky Mountain state didn’t have a presidential primary or caucus, which took Colorado completely off the primary map. In late August, party officials decided  to cancel the traditional presidential voting to avoid binding its delegates to a candidate that may not survive until the Convention in July. The decision of selecting delegates through a caucus process sparked outrage where thousands of Republican voters were negated to weigh in on their choice of presidential contenders, leaving the state party members to be the kingmakers.

Once decided that Colorado would opt out of holding a presidential voting system, Cruz supporters seize the opportunity to build a strong organization behind the scenes to recruit delegate candidates and capitalized on Trump campaign’s failure to quickly adjust to the new system. It wasn’t until last week when Cruz had won the first six of the 37 delegates that Trump hired Patrick Davis to oversee the organization of national delegate candidates. When it came time to choosing the final slate of convention delegates, Trump’s campaign ballot list of preferred delegates was riddled with errors and misspellings, costing the GOP front-runner chances of winning any delegates. At the end, Trump managed to win only seven alternative delegates.

Moments after announcing that Cruz had swept all 34 delegates slots during the complex, multi-layered endeavor, the Colorado state party tweeted: “We did it. #NeverTrump.”

Within minutes, the tweet was deleted and the Colorado GOP Chairman tweeted out a retraction tweet insisting his staff had nothing to do with the #NeverTrump tweet and is now investigating on who posted the tweet.

The Trump campaign plans to file a complaint with the Republican National Committee in regards to the Colorado GOP system.

“I’m an outsider and I came into the system and I’m winning the votes by millions of votes,” Trump told about 10,000 supporters who packed the venue late Monday evening. “And I’ve gotten hundreds of delegates more and we keep fighting, fighting, fighting. And then you have a Colorado where they, frankly, where you know, just get all of these delegates, and it’s not a system. There was no voting.”

Aside from Colorado politics, Trump reminded the Albany crowd of Cruz’s infamous comment of “New York Values,” that was displayed with “disdain and hatred” for New York.

“New York is very important. Remember New York values, when this character said with disdain? He knocked pretty viciously New York values,” Trump said. “[Cruz] does not like New York. He does not like the people of New York and that came out loud and clear just take a look at the scorn on his face when he said it.”

Trump went on to add what New York Values represent. “When we took the worst attack in the history of our nation, we were strong, we were loving and we had heart,” Trump said. “Nobody has values like us. The country loves New York.”

Following the Colorado results, Trump now has 743 delegates with Cruz behind him having 540 delegates, and John Kasich with just 143 delegates. New York heads to the polls in a week on April 19.