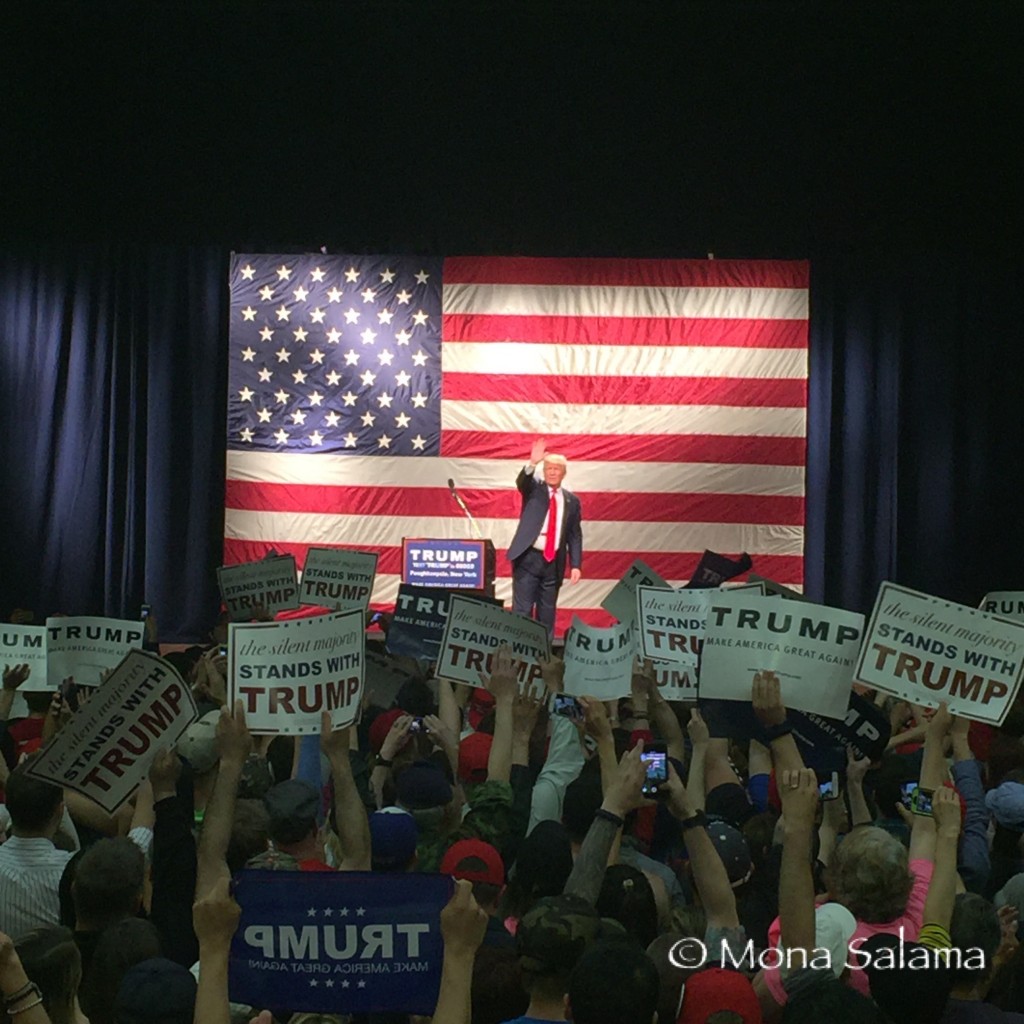 Poughkeepsie, NY. — GOP front-runner Donald Trump is looking to sweep a crucial primary election in home state where 95 delegates are on the line and awarded to the winner who cracks the 50% each of the 27 congressional districts. If Trump gets less than 50% in any particular district, the second place finisher is able to pick up a delegate as the winner is awarded only two.

“We have to win by big numbers!” Trump declared to the thousands who gathered on a gorgeous Sunday afternoon at the Mid-Hudson Civic Center in Poughkeepsie, New York. “You’re going to go home, rest up on Monday, make as many calls as you can and give us that big win on Tuesday.”

The latest polls in New York from Emerson shows Trump ahead with 55% support, followed by 21% for Ohio Governor John Kasich and 18% for Cruz. According to pollsters on CBS Face The Nation, New Yorker view Trump as “effective, authentic, electable and a good negotiator.”

Over the weekend, Cruz picked up 14 delegates in Wyoming during a state convention, a week after he picked up 34 delegates in Colorado’s state convention. The additional 48 delegates for Cruz is now seen to make it difficult for Trump to capture the 1,237 delegates needed to clinch the GOP nomination before July. Trump currently has 744 delegates to Cruz’s 559, according to the Associated Press delegation tracker, followed by Kasich with 144.

More than 3,000 people filled the Civic Center Main Hall. In the overflow room, over 1,000 people were seated in the McCann Ice Arena while over hundreds more were lined up outside, unable to gain entrance. Only about 100 protestors gathered across the street from the venue to decry Trump on his campaign rhetoric and policies. Rally goers who waited outside to hear Trump speak for roughly 40-minutes largely ignored those outcries from the small group of protestors.

During his speech, Trump read from a job report he obtain of New York and blasted NAFTA and TPP as the reason for upstate New York job loss and economic decline. He blamed the nation’s “incompetent leaders” and both his GOP rivals for allowing these trade deals to occur.

On his potential Democratic rival, Hillary Clinton, the front-runner dubbed the former Secretary of State as “Crooked Hillary,” during his rally. The new line of attack was born on Saturday during his rally held in Watertown, New York.

“She’s been crooked from the beginning. And to think, she has shot of being our president?” Trump said in Poughkeepsie. “Crooked Hillary Clinton. We can’t let it happen!”

Trump added, “The only person crooked Hillary Clinton does not want to run against is Donald Trump.”

“It’s a crooked process folks. It’s a dishonest process that has nothing to do with democracy,” Trump said. “The fact that you’re taking all these people out and wining them and dining them. Nobody does that stuff better than me, I just don’t want to do it.”

The mid-afternoon rally saw no protestors inside trying to interrupt the event or any violence between anti-Trump and Trump supporters.

Prior to his Poughkeepsie rally, Trump started his day in Staten Island, a borough enriched with Republicans and deep ties to the city’s emergency service. The only GOP candidate to make a stop before the state’s presidential primary on Tuesday, Trump attended and spoke the Staten Island GOP’s annual Lincoln Day brunch gala and accepting an award and endorsement from the New York Veteran Police Association.