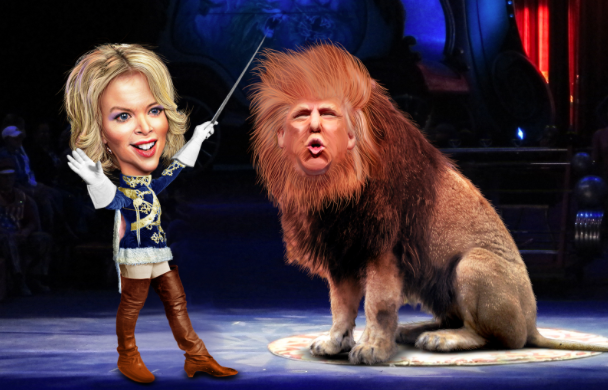 Megyn Kelly has reportedly gone rogue from Fox’s umbrella in an effort to mend fences with the presidential front-runner to land him for an upcoming “Barbara Walters-style” special.

Kelly’s infamous feud with Trump has brought not only her, but Fox as well, some contempt. According to NYMag.com, a February poll reported that Fox’s standing with Republicans had plummeted by 50 percent since the beginning of the year.”

Regardless of the massive attacks by the Trump supporters against Kelly over the weeks that followed the debate, her ego has remained intact. In an interview with Jorge Ramos, Kelly taunted,

“Many shows get a pop if they put him on. I would submit to you I’m the second highest-rated show in all of cable news and I haven’t had Trump on in seven months. It can be done without him.”

Kelly, however, is now re-thinking her career ladder. Her recent publicity tour, most likely to prime the public’s brain for her reported upcoming $5 million memoir deal, included Kelly garnering the cover of Vanity Fair and interviews by More magazine as well as Katie Couric at Tina Brown’s Women in World Summit. She’s even been lauded by Hillary Clinton who called her a “superb journalist”.

Kelly’s recent realization that the next step in her desire to reach the pinnacle of her field is that it cannot be done without him (Donald J. Trump). It was not only an insight – but a wake-up call.

On the morning of April 13, Megyn Kelly slipped into Trump Tower for a meeting with Donald Trump. The Fox News star was there to make peace and a pitch: She wanted Trump to end his personal attacks on her and agree to appear on a Barbara Walters–style special that Kelly is hosting next month. She arranged the private sit-down herself. She told Trump that not even her boss Roger Ailes knew she was there, according to a source familiar with the meeting. After a reporter spotted her entering the building, news of a possible détente in the Trump-Kelly war boomeranged around the internet, and both CNN and MSNBC devoted breathless segments to the story. Fox executives, caught off guard by Kelly’s clandestine outreach, released a statement suggesting this was all according to plan: Ailes had spoken to Trump “a few times over the past three months,” it noted, implying that he had helped her get the meeting. Later that night, Kelly confirmed on her show that she and Trump discussed the possibility of an interview. She made no mention of Ailes. “The meeting was at my request,” Kelly said.

If Kelly did indeed go rogue on the Trump meeting, it says a lot about her relationship with her employer — and about her employer’s relationship with the GOP front-runner. Ever since she tangled with Trump in front of the 24 million viewers watching the debut GOP debate last summer — a performance that transformed her in the eyes of many into a fearless interviewer and feminist symbol — Kelly has become Ailes’s biggest star, and biggest management headache. Meanwhile, Trump’s attacks on Fox have badly damaged its credibility with its core right-wing audience. (A February poll reported that Fox’s standing with Republicans had plummeted by 50 percent since the beginning of the year.)

Trump has engaged in an on-again-off-again feud with the network since September, refusing to appear one-on-one with Kelly for eight months, so a Kelly-Trump interview would undoubtedly draw big ratings. Presumably, Kelly went off on her own because she wants to claim credit for the booking. “She did it to prove she doesn’t need Ailes to make things happen for her,” a high-level source said. Or perhaps she is taking a page from Trump himself and operating as if her own brand were bigger than Fox’s.

Since she became the breakout star of this election cycle, Kelly has beaten Bill O’Reilly in the ratings, graced the cover of Vanity Fair, and been interviewed by Katie Couric at Tina Brown’s Women in the World Summit. In early April, Hillary Clinton called her a “superb journalist.” This publicity tour makes it clear that she is about to attempt a feat that no other Fox personality has yet accomplished: successfully crossing over into the mainstream. Kelly is in the final year of her Fox contract and will be weighing offers from Fox and rival networks. But it will be no small task to go up against Ailes, a ruthless boss who has treated Fox anchors who play hardball like traitors. When Paula Zahn left Fox for CNN in 2001, he famously told the Times he could get better ratings with a “dead raccoon.” Zahn’s career never recovered.

Kelly isn’t acting like she’s scared of Ailes. Although her contract prevents her from formally discussing outside offers, she’s been negotiating in public like the corporate lawyer she was in her pre-Fox life. “I don’t know what’s going to happen,” she told Variety earlier this month. “I’ve had a great 12 years here, and I really like working for Roger Ailes. I really like my show … But you know, there’s a lot of brain damage that comes from the job. There was probably less brain damage when I worked in the afternoon. I was less well known. I had far less conflict in my life.” When asked by Charlie Rose recently to envision the “perfect television show,” Kelly gave an answer that sounded nothing like the shoutfests on Fox News. “How about if we merge a little Charlie Rose, a little Oprah, and a little me all together. And we serve that up as an hour? Wouldn’t you watch that?”

Seems perhaps that “it can’t be done” after all. Donald J. Trump “owns the media”, and this media-maven appears to need him for the next run of her ladder ambition in becoming the next Barbara Walters – who ironically knew enough not to make enemies with anyone because you never know when you may need them – or where they may wound up in life.

Read the rest of the New York Magazine article here