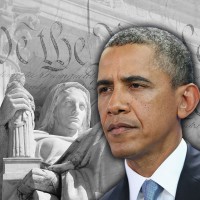 In November of 2014, President Barack Obama issued a decree called the Deferred Action for Parents of Americans  – DAPA – program. It was an executive order (the official nomenclature used when a president gives a command without bothering to involve the legislative branch of government) ostensibly intended to delay deportation action against illegal immigrants who happened to have US citizen children. The idea being, according to the Obama administration, that families shouldn’t be broken up by immigration authorities just because a father and/or mother may be in the country illegally. In other words, as is so often the case, it was the illusion of compassion used to justify the softening of America’s borders.

Of course, the devil is in the details, and in this case the goal of protecting illegal immigrants is accomplished via the “detail” of granting them legal resident status. This not only gives them legal protection against enforcement action (deportation) by immigration officials, but allows them to apply for work permits, and potentially, access to taxpayer funded social entitlement benefits such as Medicaid, food stamps, and other programs. In other words, DAPA is a direct order from President Obama that we go beyond merely tolerating people who are in the country illegally and actively reward them for it by forcing legitimate American taxpayers to support them and their families.

It’s worth noting that this plays directly into the hands of the people who benefit from the order. It’s not only what they want, it’s what many of them planned. Couples who enter the United States illegally often hasten to produce children once here, as a decidedly cold-blooded means of thwarting future deportation action against them. Called “anchor babies”, these children are sired by immigrants who seek to cynically manipulate American immigration law, which currently states that anyone born on American soil is to be legally considered a citizen of this country regardless of the nationality of their parents. So when immigrants have kids here, those children cannot themselves be deported, making the deportation of their parents alone not only politically impossible, but economically difficult – American taxpayers would still end up having to support the now orphaned youngsters, who are citizens. Frankly, it’s a disgusting tactic that uses children as human shields against law enforcement, and it’s distressingly common among illegal immigrants. DAPA is an official payoff of this deplorable strategy.

It’s also unconstitutional. The President of the United States is not empowered to effectively rewrite American immigration law so that certain people guilty of violating it are granted amnesty. If he wishes to do that, he must ask Congress to draft a bill containing his revisions, and upon that bill’s debate and passage within the House and Senate, he can sign it. He does not get to bypass the legislative branch entirely and do the whole thing himself, which was the opinion of United States District Judge Andrew S. Hanen a few months after DAPA was issued. Using judicial oversight (one of the constitution’s checks on executive power), Hanen issued an injunction against DAPA. The Obama administration was quick to appeal, and the matter remains tied up in the courts. Later this year, the US Supreme Court (as an 8-member body, following the death of Antonin Scalia) will hear arguments in the case.

It’s baffling how we got here. This is the only country in the world that openly tolerates the wanton violation of its borders by foreign expatriates who enter without any oversight or authorization. But beyond that, we have somehow crossed into a bizarre twilight zone of elected US Presidents issuing unconstitutional executive orders that reward these lawbreakers at the expense of all legitimate US taxpayers. This is political imprudence, pure and simple.

Armenian Genocide: More than 100 Years of Silence against Christian Persecution