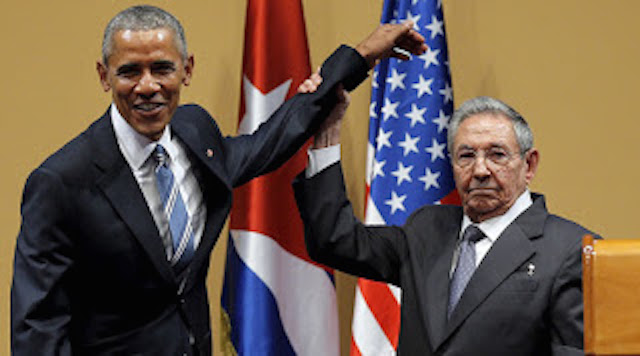 In 1972, Ishmael Muslim Ali LaBeet and four other killers walked into the Fountain Valley golf club in the Virgin Islands. They rounded up four Florida tourists and four employees, forced them to kneel on the ground, and opened fire.

That was how the Fountain Valley Massacre began.

Afterward LaBeet and his fellow murderers were swarmed by civil rights attorneys eager to claim that their clients had been tortured into confessing. But the claims of torture were undermined by LaBeet.

The killers were found guilty and sentenced. But LaBeet hijacked an airplane to Cuba. Today he is still there, north of Guantanamo, calling himself a Communist.

LaBeet is one of many terrorists who have killed Americans and who are being harbored by the Castro regime. The pain of the victims of these left-wing terrorists under the protection of the Castro crime family have not been mentioned in the rush to celebrate the “opening” of Cuba.

Even though Obama illegally and falsely delisted Cuba as a state sponsor of terror, the Communist dictatorship still remains a haven and a hub for terrorists from around the world.

Cuba is best known for its ties to the Marxist narcoterrorists of FARC who have kidnapped and murdered Americans. But the Iran-backed Islamic terrorists of Hezbollah, who carried out the Marine barracks bombing in Beirut, have a home in Cuba. As do members of the left’s former terrorist networks in America.

Castro’s hotel for killers hosted the murderers of Patrolman Robert Rosenbloom in New Mexico. Two of them have since died, but Charlie Hill of the Republic of New Afrika is still a free man in Cuba and has been complaining to the media about his life in the Communist dictatorship where he is required to work for a living and smoking pot is a crime.

Discussing the murder of Rosenbloom, Hill has said, “I have never felt guilty about that cop. I never think about that dude.“

William Morales, the bombmaker for FALN, a Puerto Rican separatist terrorist group that currently enjoys almost as much support from the New York City Council as it does from Castro, was linked to the Fraunces Tavern bombing in New York which killed four people and wounded dozens.

Morales was allegedly aided in his escape by his lawyer, Susan Tipograph, who was supposed to have strapped bolt cutters to her thighs. Tipograph is married to former Weathermen terrorist Cathy Wilkerson whose terrorist pals blew up her father’s Greenwich Village townhouse while working on a nail bomb meant to be used on an army dance at Fort Dix. Tipograph went on to defend Lynne Stewart, another radical leftist lawyer who was convicted of aiding the Blind Sheikh who was linked to the World Trade Center bombing and future terror bombing plots in New York City.

The bombmaker and terrorist leader is still reportedly alive and well in Cuba.

And then there’s Frank Terpil, a traitor who provided weapons to terrorists and worked for Saddam, Gaddafi, Arafat and other enemies of the United States before joining up with Castro to undermine America. There are allegations that Terpil died recently, but such claims have been made before.

But the most famous American terrorist in Castro’s Hotel for Terrorists is Joanne Chesimard aka Assata Shakur. Shakur, a member of the Black Liberation Army terrorist group, murdered New Jersey state trooper Werner Foerster. Even while the FBI had her on its Most Wanted list, Obama visited a country where cop-killers like Chesimard and Hill are protected by its Communist government.

While the families of the victims of the Fraunces Tavern bombing, the relatives of dead police officers and murdered tourists wait for justice, Obama bailed out the regime responsible for denying it.

But many of his supporters view Chesimard and Hill as heroes, not as criminals.

In Open Letter Part II, Jay Z gleefully raps about his White House connections and support for cop killers. “Boy from the hood but got White House clearance”, “Obama said ‘chill, you gonna get me impeached’”, “With the Obamas, I ride, I meet the president on the Southside” and pivots to “Assata Shakur, they tried to execute her, I went to Cuba to see her, We should free her, like we should Mumia.”

The radical left has always celebrated the murderers of police officers. The unlikely escapes to Cuba by left-wing terrorists in America required aid and comfort from figures in the left-wing establishment.

And now Lynch’s DOJ may finally give Charlie Hill the slap on the wrist he wanted in exchange for letting him come back. Joanne Chesimard may finally be allowed to do her celebratory tour of campuses in the United States. And Morales may be able to visit the city that he bombed where he will be feted by New York City Council Speaker Melissa Mark-Viverito who supports FALN terrorists and has refused to recite the Pledge of Allegiance.

Obama would not have put in this much effort into aiding the Castro regime if the Communist dictatorship weren’t such an inspiration to the American left. Castro understood that for the bargain price of providing a refuge for left-wing terrorists, he could secure the undying loyalty of extremists like Obama.

After Castro provided aid and comfort to left-wing American terrorists, the American left is finally in a position to bail out the Castros.

Daniel Greenfield: How Bernie Sanders Sold His Soul to the Left