An heart that imagineth wicked enterprises, feet that be swift in running to mischief, A false witness that speaketh lies, and him th 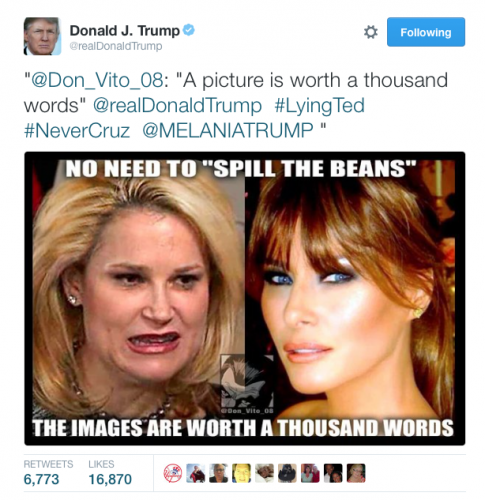 at raiseth up contentions among brethren.   Proverbs 6:18, 19

“What is truth?”  ~Pontius Pilate

The latest kerfuffle between Donald Trump and Ted Cruz is that “lyin’ Ted” somehow stole his chances in Colorado by cheating.  Or, as Trump’s latest Campaign guy Paul Manafort claimed it, Cruz’s Gestapo tactics.

While each state has different ways of doing things, one thing is certain- if Trump doesn’t work for it and win until he’s sick of winning, he’ll blame someone else for it, most likely by calling them names.

A  Denver Post article last August, reported about the state GOP executive committee vote to cancel the state’s straw poll after the national party changed its rules to require a state’s delegates to support the candidate who wins the caucus vote.

State Republican Party Chairman Steve House told reporters back then, “If we do a binding presidential preference poll, we would then pledge our delegates … and the candidates we bind them to may not be in the race by the time we get to the convention”.

Candidates have known about the rule change for over 6 months now, but since Donald was busy in New York, (more on that in a minute) he didn’t bother going to Colorado to try and win delegates the old fashioned way. What’s interesting is that it was Trump’s people who listed the ballots wrong for five of the 13 delegates Trump recommended voting for. Not only did they show numbers, not names, but of the five candidates, two were weren’t pledged and one was bound to Cruz. This happened on multiple updated slates, where names or numbers didn’t coincide or were incorrect or bound already.

Now, as for New York, people are focusing on the fact that New York is Trump’s turf, where he does have a comfortable lead.  But seems as if Trump is going to take all 95 delegates, he has to win with at least 50 percent in all of the State’s 27 congressional districts, which each has three delegates available.  If Trump falls short of fifty percent state wide, he gets only a proportionate share of the fourteen delegates chosen. Not only that,  if he falls short of the fifty percent threshold in any district, even if he finishes first, he only gets two of the three delegates and the second place finisher gets one delegate from that district.

When it comes to what happened in Colorado, one can understand why Trump had to make sure he focused on the ground game in New York instead.  But I don’t suppose Trump supporters care that Trump blames his loss on Cruz, calling him a liar and cheater for something he called Rick Santorum “inept” back in 2012 when Santorum failed to get enough delegates.

Not only that, but Trump supporters scarfed up what they saw on the Drudge Report as Gospel when they saw a video of Trump delegate to be Larry Wayne Lindsey as he burned his Republican party registration for being disenfranchised by the Cruz establishment regime insiders. It doesn’t matter that the story was a lie, because the Trump “Lyin’ Ted” meme has become their rallying cry every time Trump screws up.

Have you ever been the subject of slander, gossip or lies from a false witness?  Haven’t we had enough Alinsky tactics shoved on us over the past 8 years?  Picking a target and personalizing it, keeping a narrative of ‘lyin’ is Trump’s only weapon and mode of defense and it’s being repeated ad nauseam by his supporters daily.

While no one is perfect, it’s interesting that much of Trump’s slander is nothing but projection.  While he has called Jeb Bush, John Kasich, Marco Rubio, and Ben Carson liars at one time or another, he has saved his best for Cruz.

Every time Donald messes up, Cruz gets another Lyin’ meme going on about him.  From everything about Iowa, where Trump felt compelled to stick up for the man he previously called pathological, comparing him to a child molester, called Cruz ‘Cheatin’ Ted. Even though it was CNN repeating something Carson’s staffer told them. Then it moved onto the war on wives when a non-Trump PAC ran a Facebook ad featuring Trump’s wife Melania and Trump immediately accused Cruz of buying rights to the photo (false) and collaborating with the super PAC (illegal, false and stupid) and of course this morphed into the “lyin Ted” Sex Scandal of the Century. That one is quite humorous since once upon a time ago it was embarrassing to admit reading a rag like the Enquirer…

The point is, Trump projects lies, because he’s one of the biggest liars there is, and he’s got nothing else to offer. He came into the race as the outsider who shook, rattled and rolled the establishment, yelling and boasting how he’s going to do yuge things, that he’ll make winning great again or something.  Seems like all he’s done is make whining great again.

Remember when Trump was all “No one respects women more than I do”? Or how about when he was all like, I was for abortion before I became prolife so much so that I think women should be punished if they have an abortion (Oh, and Donald claimed MSNBC lied and edited the footage or something).

Trump has lying down to an art form.  But listening to his followers, I know, everyone else is a liar while Trump’s allowed to evolve because he’s not a politician. It’s interesting though, while Trump brags about being a businessman and being able to manage things, here’s Cruz busy managing. That’s what it’s always been- Trump talks while Cruz walks. That used to be a good thing, but somehow now it’s lyin’ and cheating.

Trump has one excuse for every single loss: Ted Cruz.  And he can’t stand it. So he attacks the person, the integrity, bears false witness, questions his faith, questions his loyalty, and calls him a liar.  Face it. Trump’s got nothing else.