With one seemingly “innocent” rule made to appease less than 0.3% of the general population, the actual (and very dangerous) Leftist War on Women has begun.

The following sign has been floating around social media, allegedly found in a Target women’s bathroom in Oregon: 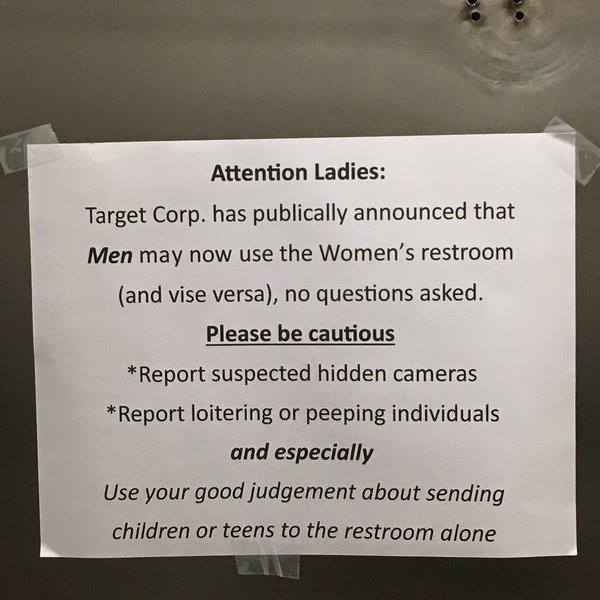 It appears it was not placed by Target employees but rather by a concerned citizen.  From OregonLive.com:

A note found in the women’s restroom by Stafford resident Nathalie Olds this week tells patrons that “Target Corp. has publically announced that Men may now use the Women’s restroom (and vise versa), no questions asked (all sic).”

The sign then warns anyone entering the restroom about potential hidden cameras or people loitering. It also encourages women to “use your good judgement (sic) about sending children or teens to the restroom alone.”

Target officials told KGW that they’re investigating who put the sign up, although Olds told the station she’s avoiding the store until she’s sure it wasn’t an employee.

Taken literally, Olds said, the sign made it seem as though cisgender straight men were now allowed to visit the women’s restroom, which Target’s policy does not condone.

OregonLive goes on to say, “The posting is just the latest in such backlash against Target’s trans-friendly policy. Organizations such as the American Family Association have mounted a campaign to paint the policy as an excuse for predators to enter public bathrooms despite study after study debunking such claims.”

We hope and pray that all of the studies “debunking” claims that predators will never take advantage of innocents in bathrooms are correct—but the inconvenient truth is that predators have also been praying for this type of open door policy since the beginning of time.

So congratulations, Leftists.  The real, and very dangerous, War on Women has begun.