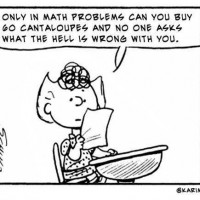 The Common Core State Standards Initiative is a set of educational milestones in English and Mathematics that (in the initiative’s authors’ opinions) K-12 students should be able to meet by certain times. A child who graduates third grade, for example, should be able to formulate an English sentence or solve a simple math problem up to a given level. The idea, ostensibly, is to establish a standard to which all schools, regardless of the state in which they operate, should strive – and that standard is one that will allow graduates to weather college courses or enter the workforce at once.

Unfortunately, like so many things the federal government attempts to do with good intentions, the reality of this initiative has already proven a colossal failure. That’s because Common Core doesn’t just seek to set goals for students; it fundamentally rewrites the ways in which schools are to educate them. What’s more, it does this in ways that are almost comically inefficient and frustrating. 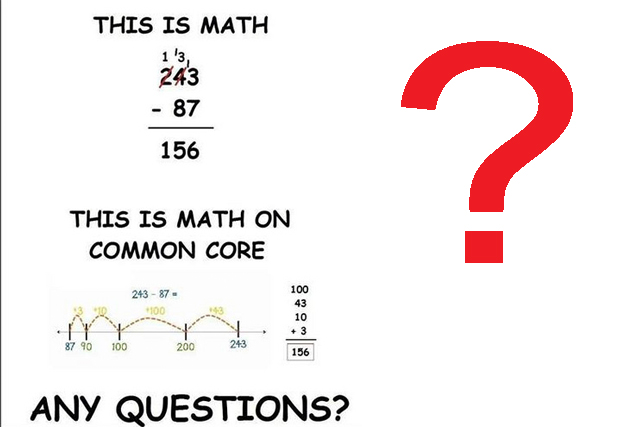 To illustrate this, let’s look at a math problem. Even if you can do it in your head, close your eyes and imagine writing out the solution for thirty-two minus twelve. It’s pretty easy: We have 32 on top and 12 under it. Then we subtract 2 from 2 and 1 from 3, and we’re left writing 20 – the correct difference. It’s a simple equation, but the only way it could really get much more complicated is if a bottom digit were ever greater than one above it; then we would have to “borrow”, which can be an intimidating concept for children to learn, but is ultimately pretty straightforward and easily understood.

But the same problem turns into a nightmare under the Common Core system. Instead of a single line of work, now the student is supposed to write four lines, each containing its own equation. We get calculations like 12 + 3 and 20 + 10, each of which at least contains numbers that appear in the problem or are the answer, but then there are the bizarre exercises of 15 + 5 and 30 + 2, neither of which seem at all helpful.

What’s more, teaching this ridiculous system is proving to be a sublime frustration at homework time – for parents as well as children. If you don’t know how to work the process and your child doesn’t understand it, how are either of you supposed to make any headway? One frustrated father, sarcastically answering a word problem that instructs children to “write a letter to Jack telling him what he did right, and what he should do to fix his mistake”, wrote:

“Don’t feel bad. I have a Bachelor of Science Degree in Electronics Engineering which included extensive study in differential equations and other higher math applications. Even I cannot explain the Common Core mathematics approach, nor get the answer correct. In the real world, simplification is valued over complication.”

And that, if you’ll pardon the word choice, is the core of the problem here. Common Core’s system may ultimately work, but it uses such a drawn-out, cumbersome process to solve even the simplest equations that it is of virtually no value in the real world. The argument in its support is that it teaches students to understand math more completely, instilling not only the steps necessary to reach a correct answer but the fundamentals of the relationships between numbers. Unfortunately, all that’s really happening is that students are pulling their hair out and giving up – test scores have plummeted since Common Core’s inception. This is especially true among those who already trailed their peers before, and who can least afford a substandard education: Poorer children.

Of course, stories also persist that Common Core’s math system does NOT always work. Anecdotal tales have circulated the notion that students are able to claim that 2 + 2 = 5, and get full credit for “creative thinking” so long as they convincingly explain their use of the mandatory process to arrive at that answer. There’s just one minor hiccup: Two plus two does NOT equal five – never has, and never will. Moreover, mathematical answers are not subject to gradation; they are absolute. Each one is either perfectly right, or completely wrong. American scientists and engineers did not put people on the Moon by believing in some hazy middle ground in which two plus two might maybe kinda sorta equal five – and teaching our children that that actually is possible is a profound disservice to them and to their futures.

Tax Foundation: Americans Will Spend More on Taxes This Year Than on These Three Things Combined…