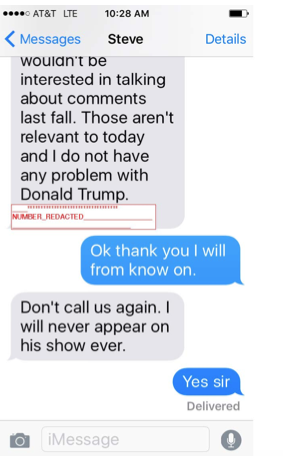 The embattled Colorado Republican Chairman is boycotting one of Denver’s premier talk radio shows, the Dan Caplis Show, after the host invited him on his show to explain comments made last year that disparaged Donald Trump.

Chairman Steve House has been the center of controversy after the Trump campaign cried foul on Colorado’s delegate election process.

On his April 14th radio show, Caplis focused on the Colorado GOP’s decision against having a presidential preference poll—also referred to as a straw poll—only two weeks after the comments were made. House not only declined the invitation, but declined all future invitations.

House said in a text to the show’s producer that his comments from August of 2015 are not relevant to today. “Don’t call us again. I will never appear on his show ever,” said House.

The decision to nix the straw poll was made in light of an RNC rule change that would bind delegates based on the results of the straw poll. Under the new RNC rules, there is no mechanism to release bound delegates pledged to a candidate that withdraws from the race—essentially leaving those delegates at the mercy of the RNC.

In 2012, Rick Santorum won Colorado’s straw poll, but withdrew from the race just before the state convention. With that scenario in mind, the executive committee was lobbied by activists and state central committee members to not sanction a statewide straw poll. At the time of the decision, there were numerous candidates in the race and it was unclear that Trump would be the frontrunner that he is today.

Derrick Wilburn, Vice Chair of the Colorado Republican Party, responded to the allegations of favoritism in a Facebook Post:

Narrative being sold by many today is that when the Colorado rules were changed in August it as the “GOP establishment” trying to rig the system for Jeb. This has even been trotted out there by Rush. Its complete, total and utter hogwash. We thought no such thing.

The GOP leadership in Colorado, which was voted in last March, came in via a T.E.A.-party sweep. If anything our ExComm was decidedly anti-‘establishment’/anti-Bush. But this was last August when there were 12, 13, 14 (don’t recall the exact number) people in the race and Trump was no where near the juggernaut he’d eventually become. In fact many were considering him as just a circus act with no chance of sustaining things long-term. This was LAST AUGUST. How could we POSSIBLY have had any idea how many candidates would be left in the race come April let alone who they’d be?

Do people really think that –LAST AUGUST– we sat around and said, “You know, it could happen that come next April the only ones left in the race might be Trump, Cruz and Kasich so we’d better change the rules right now so as to squeeze Trump out”–? Its not even reasonable. 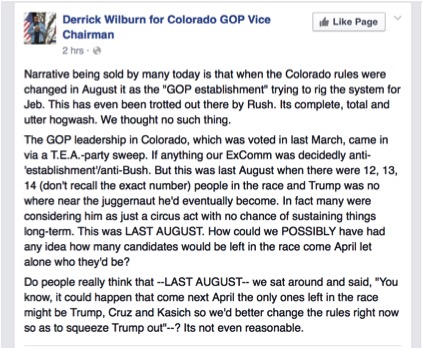 Friday April 15th is National Day of Silence. But Why?