Burlingame, California. — Hundreds of demonstrators gathered outside the Hyatt Regency Hotel where the on the California Republican Convention convened to protest GOP front-runner Donald Trump.

Protestors seen from outside the hotel were a collection of different liberal grassroot groups such as Black Lives Matter, Code Pink, and supporters both Democratic candidates – Hillary Clinton and Bernie Sanders. Hundreds of protestors broke through police barricades set up surrounding the location as police guarded the entrances to stop them from entering inside the convention. Those who were able to climb the front of the hotel tried to hang a 100 foot high “Stop Hate” banner before they were repelled by police.

The timed stunt was coordinated to protest Trump’s luncheon speech with its initial goal of shutting down the entire convention appearance at the GOP convention. According to one of the group of demonstrators in attendance, ANSWER (Act Now to Stop War & End Racism) Coalition said the protest was planned over two weeks ago after learning that the GOP front-runner would be in the area. Some of the protesters managed to get inside the hotel by booking rooms in advance. When inside, they infiltrated the hotel to hang a similar banner and balloons from an upper balcony visible from the lobby. Security was able to take down the banner, as well as pop the balloons that caused some scare by the attendees inside who thought shots had been fired. 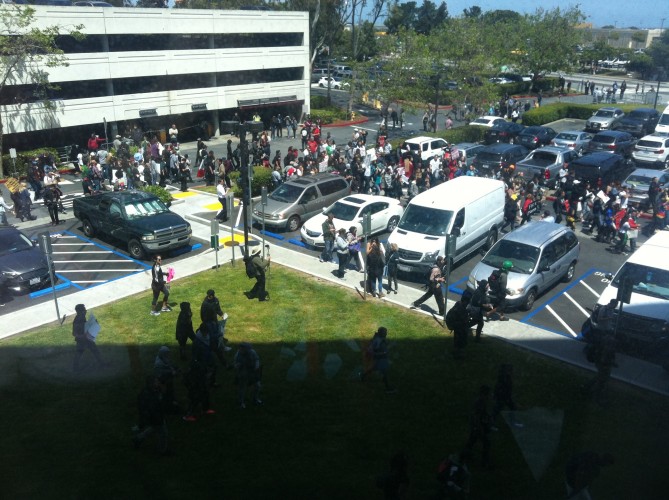 Using military-like tactics to flank the outnumbered police, demonstrators waving anti-GOP signage, waving the Mexican flag ringed the hotel shouting “F*ck the police” and “F*ck the GOP”. Large unruly protestors threw eggs at officers and the side entrance of the hotel. At least five people were arrested, according to a police spokesman. 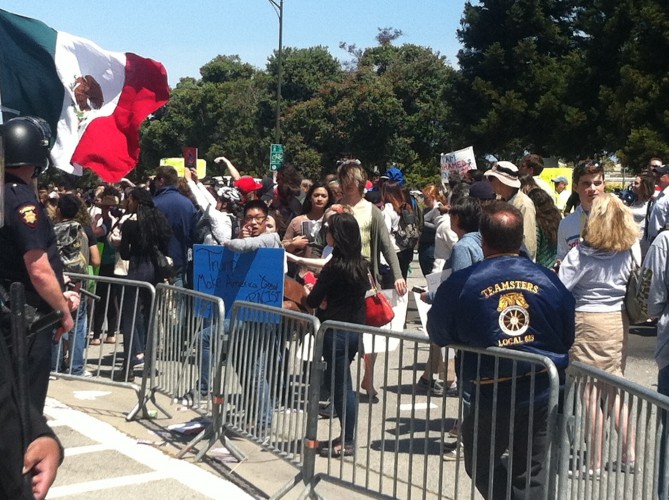 Those attendees not inside the Trump luncheon watched from Knuckles, a restaurant inside the Hyatt Regency hotel, wondering whether these protestors would break into the hotel despite the strong police presence.  Watching CNN’s news feed from the bar, many cheered as they saw Secret Service spirited Trump to the venue. 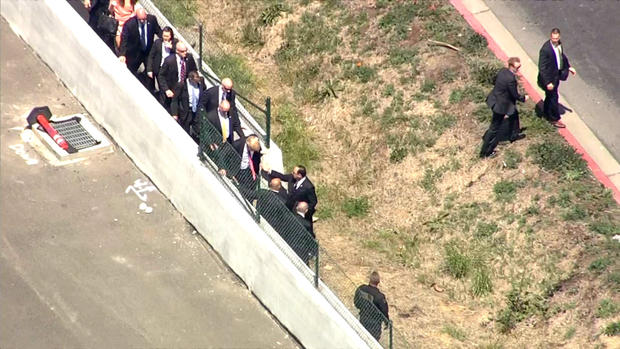 Inside the event, delegates and others in attendance waited to hear from the front-runner as he kicked off the three day event. His speech was scheduled to start at noon but was delayed as a result from the disruption. With the hotel entrance blocked, Trump and his Secret Service was forced to exit his motor-cade on the 101 freeway. Captured by helicopter news cameras, Trump and his entourage were seen jumping over a highway wall to walk across a strip of grass in order to sneak in the hotel through a back entrance.

WATCH: @realDonaldTrump exits his speech in California by climbing over a barricade to avoid protesters.https://t.co/xOzgokBc2x

“That was not the easiest entrance I have ever made,” Trump said, once he took to the stage shortly after 1pm. “My wife called and she said there are helicopters following you, and then we went under a fence and through a fence, and, oh boy, it felt like I was crossing the border, actually.”

Speaking for about half an hour, Trump called for a party unity, adding that he is the best positioned to beat Democratic front-runner Hillary Clinton in a general election matchup.

“The Republican Party, in a presidential sense, doesn’t win anymore,” Trump said. “We have to get together as a party because it is a tougher road to the presidency for the Republicans. And you really have to pick somebody that knows what is happening, that is really, really good. I accept the position.”

Trump noted on those who are in part of the #NeverTrump may not support his candidacy come this fall, but brushed it off as a minor issue. “Could I win without it? I think so, to be honest, I think so,” he said. “I think I will win even if we’re not together. I mean there are some people, I honestly don’t want their endorsement. I just don’t want it. It’s not going to have any impact on whether or not we beat Hillary Clinton. It’s not going to have any impact. But most of the party has to come together.”

California’s June 7 primary has 172 delegates up for grab, making it the biggest prize in this year’s extended nominating contest. The delegates are allocated on a winner-take-all by district system which creates 53 mini-elections, with 13 delegates awarded to the candidate who wins the popular vote statewide.

Congrats Leftists: With One Rule Protecting 0.3% of Population, the Very Real War on Women Has Begun.