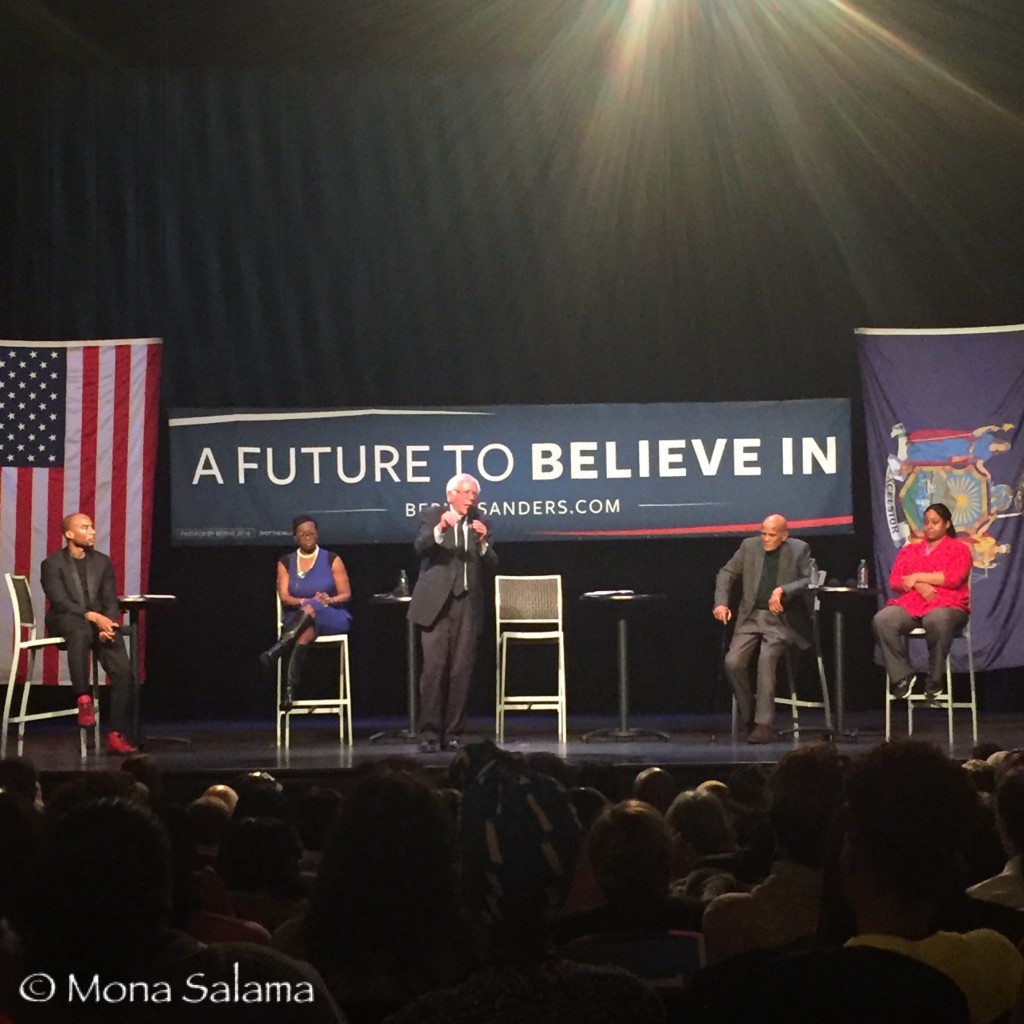 Harlem, New York. — During a community conversation forum in Harlem, Democratic candidate Bernie Sanders called on former President Bill Clinton to apologize to the American people for his administration’s role in incarcerating large numbers of black people during the ‘War on Drugs’ era.

“Unacceptable,” Sanders responded when asked about Bill Clinton’s recent confrontation with a Black Lives Matter protestor during a campaign event in Philadelphia earlier this week. “The president owes the American people an apology for trying to defend what is indefensible.”

Coined as a community conversation with Bernie Sanders, the Saturday evening event held at the Apollo Theater in Harlem included four other black supporters who took part in the Q&A discussion. Sharing the stage with Sanders included entertainer and activist Harry Belafonte, hip-hop personality Charlamagne Tha God, former Ohio Senator Nina Turner, Erica Garner, the daughter of Eric Garner, a Staten Island man who died in 2014 after being placed in a chokehold by an NYPD officer.

Continuing on his thoughts on Mr. Clinton’s remarks, Sanders added, “We all know what the term meant in the context that it was said years ago. We know who they were talking about.”

The former president and husband to Democratic front-runner Hillary Clinton faced heavy backlash earlier this week in Philadelphia when confronting a protester who heckled him over the term “super predator.” In 1996, Hillary used this term to describe young black gang members while defending her husband’s criminal justice reforms during his reelection bid. “They are not just gangs of kids anymore. They are often the kinds of kids that are called ‘super predators,’” Hillary said in 1996. “No conscience, no empathy.”Since then, Hillary has backtracked on her remarks, stating once when confronted in February that she regrets using that term.

On Thursday during a campaign stop in Philadelphia, the former president was involved in a few tense exchanges with a pair of protestors in regards to bills he signed as president such as 1994 crime control bill and the 1996 welfare reform act.

“This is what’s the matter,” Mr. Clinton said, getting testy back at the protesters. “I don’t know how you would characterize the gang leaders who got 13-year-old kids hopped up on crack and sent them out on the street to murder other African-American children. Maybe you thought they were good citizens, she didn’t! You are defending the people who killed, the lives you say matters. Tell the truth!”

On the welfare law, Mr. Clinton defended the bill that imposed limitations on federal assistance and enacted work requirements for those seeking in such assistances. “They say the welfare reform bill increased poverty,” Mr. Clinton said. “Then why did we have the largest drop in African-American poverty in history when I was president? The largest in history.”

When asked about Mr. Clinton remarks of defending his welfare reform, Sanders criticized the former president for signing this legislation into a bill, blaming the Republicans for misinforming and stereotyping Americans. “The premise, which was a right-wing Republican premise, was that the problem was that all of these poor people were really living high off the hog,” Sanders said. “There were all the “welfare queens”, remember that? All these poor people just living so well on welfare. That bill was passed and the result of it was poverty for the poorest of the poor went up very significantly in our country.”

Sanders pledged if elected president that he “is not going to be beating up on the poor.”

“Here are people who are helpless, who are barely making it economically,” Sanders added. “To go after them to win votes and cut the benefits of children and moms is unacceptable.”

Taking questions from the audience, one man wearing a Black Lives Matter pin demanded Sanders to explain his Jewish relationship. “You went to Israel for a year. As you know, Zionist Jews—I don’t mean to offend anybody, they running the Federal Reserve, they running Wall Street, they’re running everything. What is your relationship with your Jewish community?” the man shouted at Sanders to explain.

The diverse crowd mixed of Whites, Blacks and Hispanic responded with boos as Sanders try to calm the Black Lives Matter protestor who kept asking the Vermont Senator to respond. “Brother, that’s not what you are asking,” Sanders said. “I’m proud to be Jewish, but you’re not going to find any candidate running for president, for example, to talk about Zionism and the Middle East.”

Sanders added, “I am a strong defender of Israel, but we have got to pay attention to the needs of Palestinians. We’re going to have to treat both sides with respect and equality.”

The event kicked off with Sanders telling the crowds of his recent win in the Wyoming Caucus and added a win in New York would be a huge step forward.

“If we can win here in New York, it will be a huge step forward,” Sanders said.

The Dangers of 'Headline Think'