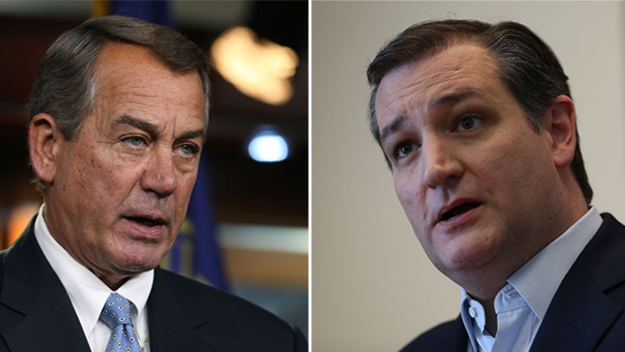 Former House Speaker John Boehner is no fan of Senator Ted Cruz and he reminded Americans how he felt about the GOP presidential candidate by unleashing a barrage of insult during a forum at Stanford University on Wednesday.

“Lucifer in the flesh,” the former speaker said of Cruz, according to The Stanford Daily. “I have Democrat friends and Republican friends. I get along with almost everyone, but I have never worked with a more miserable son of a b—h in my life.”

In regards to Cruz’s rivals, Donald Trump and John Kasich, Boehner called them his friends. In regards to Trump, Boehner said he and the GOP front-runner are “friends that have played a lot of golf throughout the years and use to be texting buddies.” He added that he hasn’t heard from Trump since he decided to run for president and predicts he will become the nominee. “It looks like he is going to be the nominee,” Boehner said. “I can’t believe this… but if he wins Indiana next week, there are enough uncommitted delegates that he can sway his way and I think he is likely to get the nomination.”

As for his fellow Ohioan, Boehner portrayed Kasich as a high maintenance friend. “He requires more effort on my behalf than all my other friends,” Boehner said. “But he is still my friend, and I love him.”

On the Democratic side of the race, Boehner praised Senator Bernie Sanders but gave mixed reviews on Hillary Clinton. “I think Bernie Sanders is the most honest politician running for president,” Boehner said. “Because he really, truly does believe all that crazy stuff he talks about.” On Hillary, Boehner impersonated the front-runner for playing the gender card in this election but did praise her for her being accomplished and smart.

“Don’t be shocked if we get to the week before or two weeks before the convention, here comes Joe Biden parachuting in and Barack Obama fanning the flames to make it all happen,” he said. “It’s no secret the Obama team and the Clinton team has always been a rocky road. The President and the Clintons have a pretty good relationship, but their political teams have an awful relationship. There would be nothing that would make Obama happier than to see this pathway paved for Joe Biden.”

Later, Cruz reacted to Boehner comments during an impromptu press conference in Fort Wayne, Indiana, by denying that he ever knew the former speaker. “The interesting thing is he said ‘that I’ve ever worked with,'” Cruz told reporters when asked about Boehner’s remarks. “I have never worked with John Boehner. The truth of the matter is — I don’t know the man. I’ve met John Boehner two or three times in my life. If I have said 50 words in my life to John Boehner I’d be surprised, and every one of them has consisted of pleasantries.”

Cruz added that he offered to speak to the former speaker in 2013 during the government shutdown, in which he architect, in an attempt to resolve the issue. “Indeed, during the government shut down, I reached out to John Boehner, to work with him to get something meaningful done and he said, ‘I have no interest in talking to you,'” Cruz said. “So when John Boehner calls me Lucifer, he’s not directing that at me, he is directing it at you. What Boehner is angry at is me standing with the American people, energizing House conservatives to stand with the American people and actually honor the commitments we’ve made”

On Boehner personal relationship with Trump, Cruz seized on the opportunity to attack his GOP rival.

Tell me again who will stand up to Washington? Trump, who’s Boehner’s “texting and golfing buddy,” or Carly & me? https://t.co/qvYPSaTEV7

After Tuesday Night’s Trumpnado, Does Cruz Still Stand a Chance?