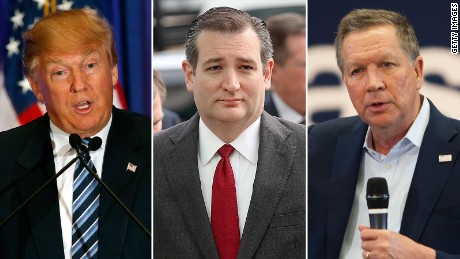 For months, the crowded GOP field all pledged to commit their support to whoever the eventual party’s nominee would be. Well that was months ago. Now, the three remaining candidates have reversed their earlier vows, adding turmoil to an already fragile Republican Party.

During the first GOP debate, hosted by FOX News, Trump memorably raised his hand when asked if anyone would not make the pledge to run as an independent candidate. This led to weeks of behind-the-scenes efforts by GOP leaders trying to avoid a repeat of the 1992 elections when billionaire businessman Ross Perot ran a third party nomination, siphoning votes from President George H.W. Bush and causing him to lose to Bill Clinton.

A month later, Trump signed the pledge of allegiance to the Republican Party, effectively ruling out a third-party or independent run. His rivals followed suit as well, signing on to endorse the eventual nominee regardless of who it is. When asked again earlier this month in a FOX News debate in Detroit, all three said they would support the nominee, even if the nominee is Trump.

Now with the Wisconsin primary less than a week away, the latest sign of division in the GOP grew when front-runner Donald Trump, Ted Cruz and John Kasich all declined to confirm the pledge they made six months to support whoever the nominee will be during a CNN town hall.

“All of us shouldn’t even have answered that question,” Kasich said. “I have got to see what happens. If the nominee is somebody I think is really hurting the country and dividing the country, I can’t stand behind them.”

Kasich didn’t responded when asked if he believes Trump was somebody that would harm the country as the nominee. “That’ll be up to the voters here,” Kasich said. “I’m not going to get into that. That’s too much below the belt.”

CNN moderator Anderson Cooper followed up, asking Cruz if he would support Trump if he would become the eventual GOP nominee. “Donald is not going to be the GOP nominee. We’re going to beat him,” Cruz responded. “I think nominating Donald Trump would be an absolute train wreck. I think it would hand the general election to Hillary Clinton. I don’t want to see the White House given over to Hillary Clinton.”

Trump responded “no” when asked the same question.

“I have been treated very unfairly,” Trump said, adding he believes the “RNC, the Republican party, and the establishment” are not treated him with respect as promised.

When asked if the pledge he took is now “null and void,” Trump responded, “I’ll see who it is.”

“I’m not looking to hurt anybody,” Trump said. “I love the Republican party.”

Hillary Clinton Needs New Yorkers to Back Her - Again