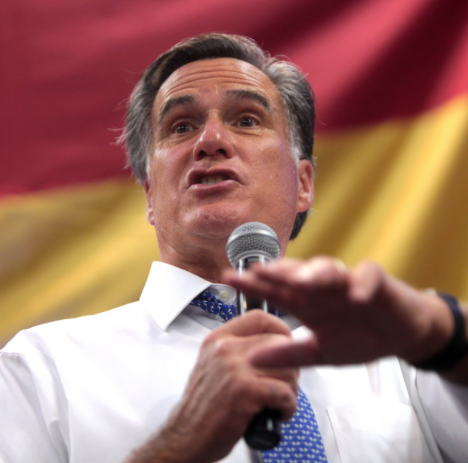 The ugly horns of hypocrisy and egoism are hard to cover. In the 2008 primaries, Romney spent $110 million and won 11 states. $45 million was his, the rest from donors and special interests. He withdrew from the race on February 7. By the same time, Donald Trump spent $11 million (all of it his own) with approximately the same result (winning 10 states). The GOP anti-Trump spending is $220 million as of the end of February 2016.

In 2012, Romney used all available committees and PACs to raise funds. Both he and Obama spent approximately $1 billion each – unlike Donald Trump, not of their own money – on the campaign. Accused of “flip-flopping” on various issues (Obamacare, Medicaid, Dodd-Frank, Sarbanes-Oxley, etc.), he said: “I have been as consistent as a human being can be.” Romney also supported preserving Guantanamo and the so-called “enhanced interrogation techniques” against terrorists. How is that different from Donald Trump’s saying “I remain flexible to conduct deals?” In what respect can Romney claim higher ground here?

One thing Romney cannot “accuse” Donald Trump of is that he had a millionaire father – because they both did. Unlike Romney, however, who tried to hide his assets and look as malleable and amenable to the liberal voter as he could, Donald Trump has been proud of his father’s “millions” because he knows they represent his family’s work ethic and achievement. There is no room for envy in this country! If you had a father who worked hard all his life and made a lot of money – as opposed to, for example, a father who had immigrated here from a communist country, never learned proper English and washed dishes in a restaurant – well, neither should be held against you. The sickening socialist “fairness” has nothing to do with opportunity, and any arguments along the lines: “He inherited 200mil, no wonder he is better than I am…” have no place in America!

I recall exactly when I heard a similar sentence last time. It was in 1988, at the annual address of the Dean of the Olympic Sports Institute where I was “housed” for four years before the fall of communism. Castro was the idol of this Dean and his predilection long speeches lambasting the evil fat cat capitalists. It was not unusual for us to have to stand in rows for 5-6 hours listening to his haranguing. Castro used to hold speeches 16 hours long, we were told… Anyway, so this Comrade Dean spoke about Vaclav Havel, the chief “underground anti-communist instigator, a child of a capitalist fat pig who had inherited 200 million and Barrandov film studios from his father.” The rationale that followed: He stole it from the proletariat and so the proletariat had rightfully reclaimed it for the people! As most of you grew up in this beautiful capitalist country, allow me to elucidate: “proletariat” means the ignorant, uneducated but well indoctrinated sheep that follow propaganda panderers such as Sanders or Clinton.

I would therefore urge even such stalwart conservatives as Senator Cruz to abstain from referring to the $200 million Donald Trump had allegedly inherited (disputed by his family members). It leads to nothing good. It creates an electoral magnetic field of evil which destroys the Soul of our Nation and pulls the electorate away from the founding principles of our Country. What is more, our country’s politics have always been issue-driven, as opposed to the European parliamentary democracies, which are party-and-coalition driven. In the United States, we do not care what kind of Republican Mr. Smith is – what we care about is his ability to build, create and solve problems.

Why is Romney sticking out his ugly horns now, after three years of hibernation in San Diego? The $2.1 trillion running mate of his, Speaker Ryan, has already filed the necessary documents with the Federal Elections Commission. Meanwhile, apart from calling Donald Trump names, Romney did not endorse any candidate but urged the Republicans to vote for their respective candidates so that Rubio wins Florida, Kasich Ohio etc. – to achieve a “brokered convention” from which Romney and Ryan could re-emerge as winners. What winners would the two-time losers make, sneaking around in the grass at the last moment to try to ambush people’s will?

What Are Christians Who Vote for Trump Really Voting For?