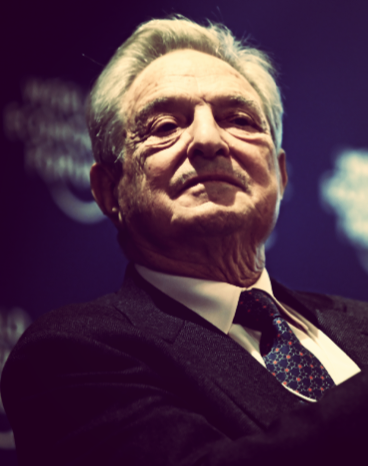 In 1992, two years after the fall of communism, I was studying in London, saving money to be able to complete my degree from University College London. I had two jobs, studied at night and was trying to move ahead. Then came Soros.

Overnight, all my savings were wiped out – on Black Wednesday, September 16, 1992. Soros became famous, made $1billion in short-selling stocks and “broke the Bank of England.” This stock manipulation has since been made illegal: it is referred to as “Abusive Naked Shortselling” and would land Soros in jail today.

Thanks to Mr. Soros’s unscrupulous thievery, I had to complete my studies in London “informally,” struggling for the next three years harder than ever before, eventually moving to Prague to complete my MA. Coincidentally, the degree I so much desired  was the same degree, which Soros had earned in London from the same university in 1951.

How was Soros able to complete his studies in London? A female tutor of his requested a financial aid of 40,000 GBP from the Religious Society of Friends (Quakers). Needless to say, 40,000 1951 British Pounds equal about half a million of today’s dollars.

Let me reiterate: the free-trading, God-fearing Christians supported Soros with half a million in return for what? Turning him into a communist pest destroying their country today… Beware of “one good turn…” as it does not always end well!

Today, Soros has become “famous” again, for his financial backing of BLM and La Raza, the Mexican anti-white KKK, which is (with Obama’s blessing, if not under his express orders) sending illegals across our southern border in order to defeat Republicans in the upcoming elections.

What is more, Soros popped up on the news allegedly in connection with Donald Trump’s Chicago rally. Soros is financially backing “moveon.org” – an organization of professional disrupters and welfare sponges.

Soros is like a bad-smelling egg which I had tasted years ago and the odor has never gone away. Who is this Hungarian Jewish communist? Why is he so left-wing when he made all his money in stocks speculation and benefited profoundly from the capitalist system?

One must start with Soros’ father, who hated Austria-Hungary because he was forced into the army and taken prisoner during the Great War. He escaped from Siberia to found Esperanto, the failed “international-language” magazine in Hungary. Of course, for anyone familiar with the Ugro-Finnish group of languages (Hungarian, Finnish), this move away from his mother-tongue is understandable, but it also underscores his social position, which was socialist even as he moved to England in 1947. Why? The Soros family survived Fascism unscathed and their beloved socialism was only just about to burgeon in Hungary shortly after the end of World War II…

Why did most immigrants come to the West from the East at the time? Economic circumstances. Poverty in eastern Europe was rampant and communism with its big government mealy-mouthed bureaucracy would never make it better. Why not sponge off the benevolent, hard-working capitalists…?

After George Soros graduated from LSE (having exhausted his Quaker support and used up his female-tutor “relationship”), he spent several years as a travelling salesman, Willy Lowman style, which were the “worst times of his life,” as he said, roaming around, begging for anyone to employ him. Finally, he did find a cozy post trading the newly created Coal and Steel Community shares (SCS subsequently turned into the Common Market and became EU as we know it today).

I am well acquainted with how the Community works and my perception is that no matter how hard you try to “implement” democracy into big government, it never works. There is an endless number of doors, departments, stages in the decision-making hierarchy. Even the best-minded people are literally stuck in their place like a cog in a slow-moving chain waiting its turn on the wheel. The wheel gets larger and larger, moving slower and slower – until it moves so invisibly slowly that nothing gets ever done. I have never been so well paid for doing so little as when I had my own office next to the Minister of DG1a in Brussels – I have also never been as frustrated and never felt as helpless since…

Apparently, this system was something Soros knew only too well how to use to his benefit. Unlike the always busy capitalist bees, contemplative communists will always study the system in order to learn how to use it to their personal benefit. Soros’ economic “philosophy” is founded on Karl Popper who based his economic theory on Marx: ideas influence market… Need I say more?

Ten years after roaming England as a door-to-door salesman-pauper, Soros founded his first offshore investment fund, shortly after his first hedge fund, based in Curacao, Dutch Antilles, where he invested $4mil of other peoples’ money and, since 1973, profited 20% annually. We have all seen enough NBC Scammers, Suckers, and Scoundrels to realize that 20% annual profit is a Madeoff profit based on skimming off other peoples’ money…

All in all, in the last 50 years, Soros has not made a cent doing honest work. He thus serves as a good example, true paragon, to all communist and socialist youth.

So Ted Cruz is Dangerous? How Shaking Cruz's Hand Caused a Fervor