Utah Governor Gary Herbert may find his popularity on the decline as grassroots activists appear to be growing in number in support of challenger Jonathan Johnson. That question will soon be answered at Utah’s Republican state convention—but if accusations of fraud against the Herbert campaign in connection with the signature gathering process are any indication, Herbert could be in trouble.

A number of individuals have come forward alleging that the Herbert campaign contacted them either by phone or email, thanking them for signing a ballot petition they say they never signed. The Johnson campaign provided PolitiChicks with numerous communications—including emails and screenshots—from supporters who expressed concern that the governor is engaging in voter fraud.

Johnson’s campaign manager sent a letter to Lieutenant Governor Spencer J. Cox calling for an investigation. The letter outlined the following allegations in a press release: 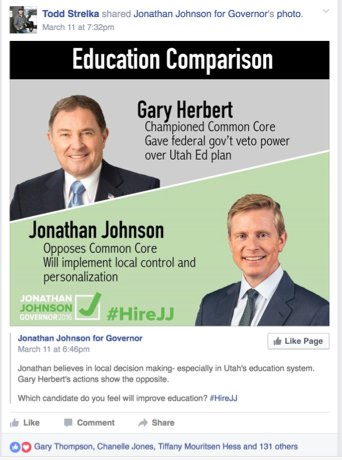 The Johnson campaign requested an independent investigation due to the lieutenant governor’s conflict of interest—Cox is approving signatures gathered for the ticket on which he is running alongside Herbert.

The Utah legislature passed a bill in 2014 allowing alternate routes for candidates to qualify for the ballot. Governor Herbert signed the very bill that will keep him on the ballot should he lack the majority of support at the state convention.

Therefore, if Johnson defeats Herbert at the state convention, they would still face each other in a primary election—assuming that the required 28,000 signatures are gathered and approved.

Social media posts indicate that grassroots activists are rallying behind Johnson. One Facebook post garnered over 100 likes of a meme supporting Johnson.

Activist Kenneth A. Miller praised Johnson in regards to his performance at a February town hall meeting in a Facebook post:

“Last night I attended a town hall meeting in Kaysville, UT, where Johnson took questions from the audience and answered every single one of them in detail, using straight-forward language with NO politispeak. I was very impressed with his point of view on critical issues and the fact that he spoke his mind clearly and did not dodge a single question that he was asked. In the political world we live in today, where politicians are eminently adept at NOT answering questions, but routinely dodge questions and give answers that are designed to distract and deflect voters from the original question that was asked it was ABSOLUTELY REFRESHING to listen to a man give direct answers to direct questions.” 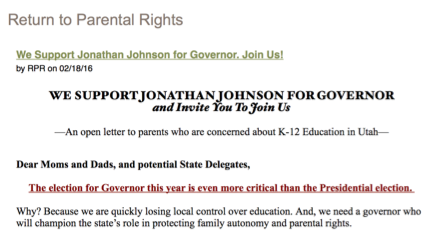 Return to Parental Rights, a Utah based group that advocates for local control in education expressed their enthusiastic support of Johnson on their Web site.

Since Johnson entered the race, Governor Herbert has refused to debate with him—and is still refusing to debate the issues. In the fall of last year, the Young Americans for Liberty chapter at Utah Valley University started a petition calling on Herbert to debate Johnson. The group’s president stated that the petition garnered over 2000 signatures.

Utah will hold its caucus on Tuesday, March 22. The 2016 Nomination Convention of the Utah Republican Party will convene on April 23. 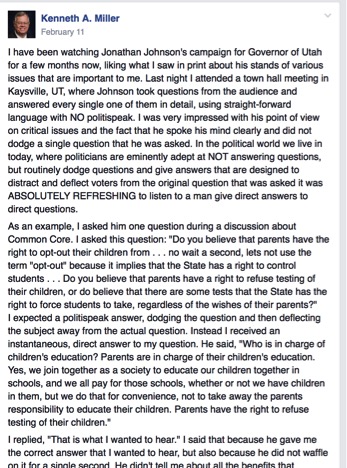 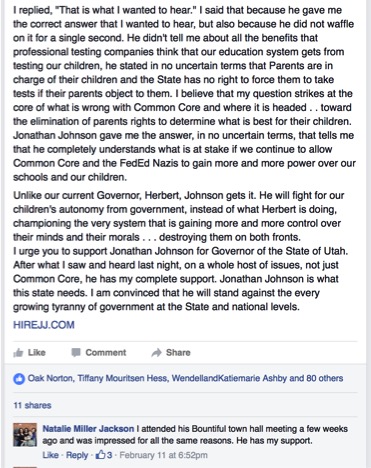