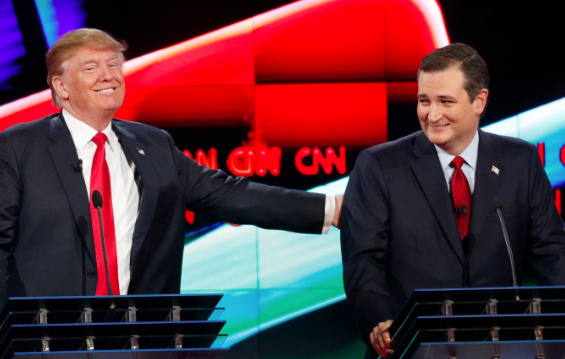 It was a great night for Donald Trump while not-so-great night for Sen. Marco Rubio as the remaining 4 GOP presidential candidates sought to win four states and 150 delegates on Tuesday.

Marco Rubio was the night’s biggest loser. The Florida senator failed to cross the 15 percent threshold required to win a share of the delegates in either Mississippi or Michigan. He didn’t even clear 10 percent. Those poor showings come on the heels of a nearly as dismal March 5 performance, mitigated only by his win in Puerto Rico on March 6. It’s a catastrophic moment for Rubio, who once seemed to have a bright future in the Republican Party, and who had won the affection of the party’s establishment. It’s clear now how little that counts for this year. Ordinarily, Rubio might face calls to drop out of the race now, but with his home-state Florida primary approaching on March 15, he might just hang until then. He’s promised to win the Sunshine State, but few analysts or polls give him a strong chance.

Here are the detailed results of each of the primary states of Mississippi, Michigan, Idaho and Hawaii. 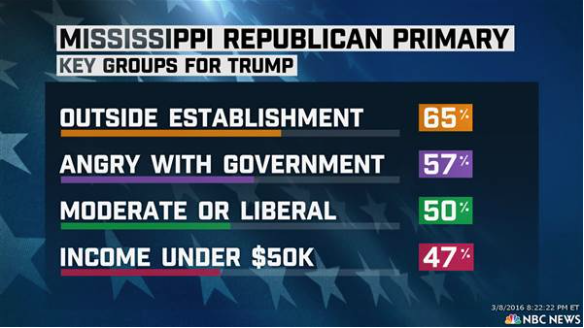 “Donald Trump won the Mississippi Republican primary Tuesday, performing particularly well with voters who are angry with the federal government and those who think the next president should be a political outsider…Trump also did well with voters in Mississippi who are either somewhat conservative or who are moderate or liberal.” 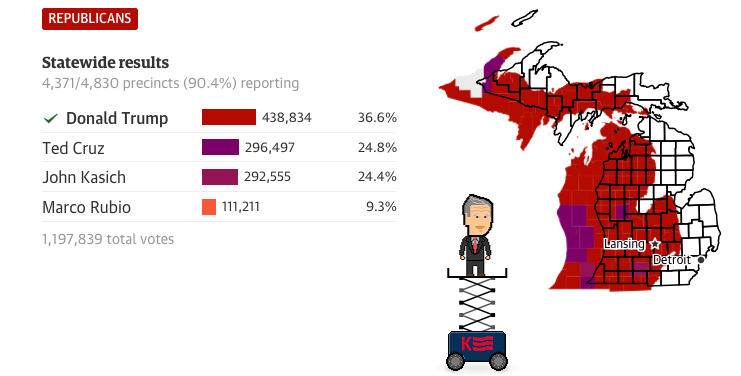 Voter turnout in Michigan was much higher than expected and at one point they actually ran out of ballots.  WZZM reports, “They were without ballots for about two hours, and people were turned away and told to return later.  Another voter at Wyoming’s Bethany United Reformed Church — precincts 24 and 25 — said they ran out of Republican ballots for more than an hour.”

According to the CBS News exit poll,

“Trump ran strongly among men (he won 44 percent) but did not do well among women: he took 28 percent, versus 29 percent for Cruz and 26 percent for Kasich.

On the Democrat side, Sen. Bernie Sanders surprised everyone by beating Hillary Clinton 50.8%/48.0%. 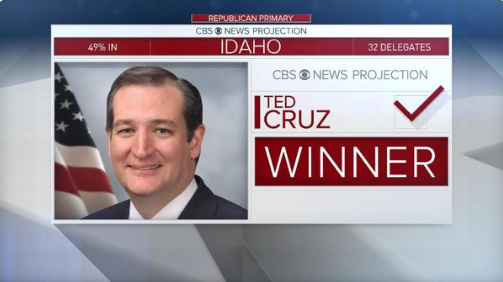 From Redstate, “Idaho is a proportional state as well, so we don’t know the delegate count, but based on exit polling, it seems that Trump will take a large share of the 32 delegates…This is a closed primary, which means there were no Democrats to help Donald Trump over the finish line.”

The Honolulu Star Advisor wrote, “Long lines at several caucus sites on Oahu indicate that Hawaii GOP leaders’ hopes for a big turnout are being realized. Before voting started, they said they hoped for about 20,000 voters or more, which would be about twice the number of the party’s strong showing in the 2012 caucus.”

1237 delegates are needed to win the GOP nomination.  After Tuesday’s primary, here are the total delegates for each candidate: