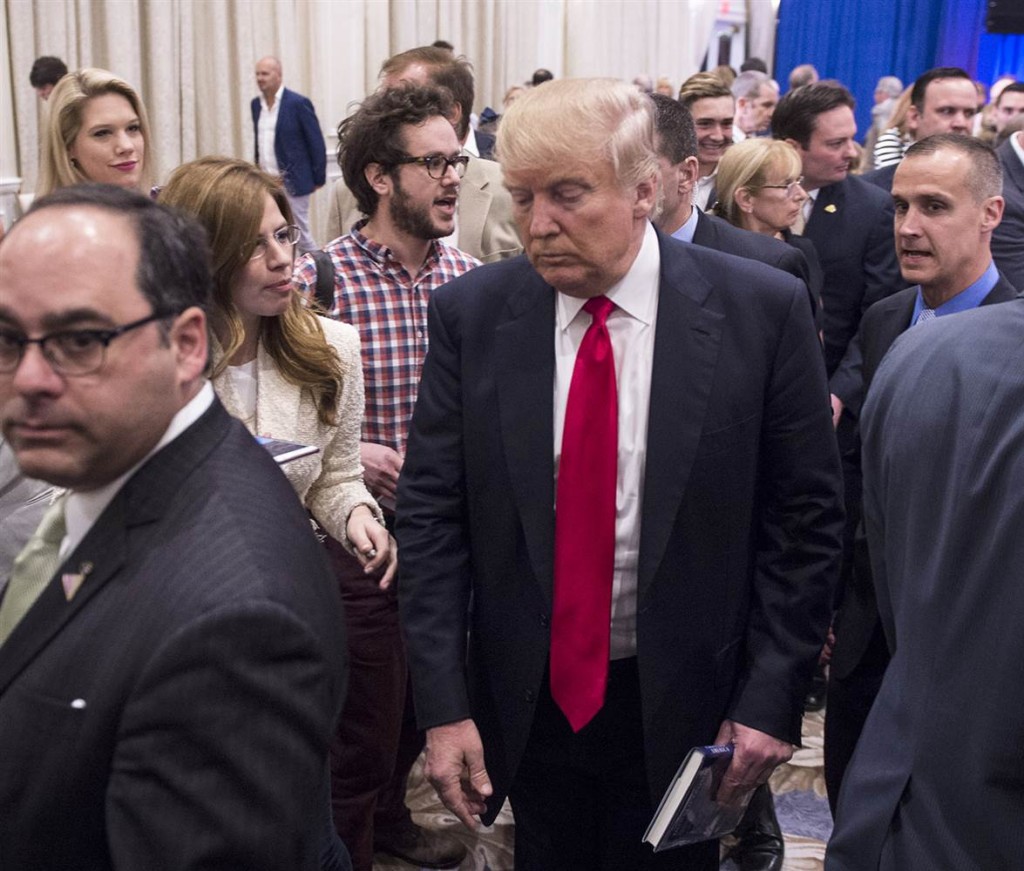 Donald Trump’s campaign manager Corey Lewandowski was charged with battery on Tuesday over an incident involving a reporter during a campaign event early this month.

The Jupiter Florida Police Department charged Lewandowski with one count of simple battery for “intentionally” grabbing a former Breitbart reporter Michelle Fields arm when she attempted to ask the GOP front-runner a question after Trump’s news conference at Trump National Golf Club in Jupiter, Florida. Video footage released by the Jupiter Police Department appears to show Lewandowski reaching for Fields as she is walking alongside Trump. Lewandowski grabbed Fields’s arm and pulling her back away from Trump as he continues to walk forward.

According to the police report, “Lewandowski grabbed Fields’s left arm with his right hand, causing her to turn and step back.” Fields filed a police report three days later, after the alleged incident where she claimed that Lewandowski forcefully grabbed her, leaving her with a bruise mark in her left forearm.

“Fields showed me her left forearm, which revealed bruising from what appeared to be several finger marks indicating a grabbing type injury,” according to the investigating officer. The video, along with Fields’s interview and an eyewitness from another reporter of the event shows probable cause to charge Corey Lewandowski with one count of simple battery for touching Fields against her will.

Fields went public with her allegation against Lewandowski before filing a police report. She also shared a photo on Twitter of her bruised arm after Lewandowski denied he never met the reporter. He also attacked her on Twitter saying Fields is an “attention seeker” that has a history of making similar allegations.

I guess these just magically appeared on me @CLewandowski_@realDonaldTrump. So weird. pic.twitter.com/oD8c4D7tw3

@MichelleFields you are totally delusional. I never touched you. As a matter of fact, I have never even met you.

Lewandowski turned himself in to police early Tuesday morning and was issued a notice to appear before a judge on May 4 for the misdemeanor charge before being released. Under Florida law, a first offense could carry a penalty of one year in prison or a fine of $1,000 if convicted.

According to Trump’s campaign statement, Lewandowski “was not arrested” while arguing Lewandowski’s innocence. “Mr. Lewandowski is absolutely innocent of this charge. He will enter a plea of not guilty and looks forward to his day in court. He is completely confident that he will be exonerated.”

Wow, Corey Lewandowski, my campaign manager and a very decent man, was just charged with assaulting a reporter. Look at tapes-nothing there!

Why aren’t people looking at this reporters earliest statement as to what happened, that is before she found out the episode was on tape?

Both Cruz and Kasich campaigns criticized Lewandowski after the story broke.

“Unfortunately, this abusive behavior seems to be part of the culture of the Trump campaign,” Ted Cruz spokeswoman Alice Stewart said. “Personal attacks, verbal attacks, and now physical attacks have no place in politics or anywhere else in our society.”

“Campaigns though always reflect the values of the candidate. I know ours does,” Kasich chief strategist John Weaver said. “If this bully worked for John Kasich, he would have been fired long ago.”