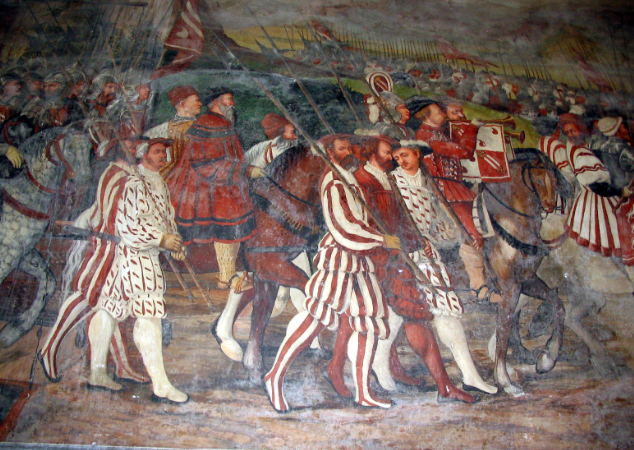 1) A leader of a private band of mercenary soldiers in Italy, especially in the 14th and 15th centuries
2) any mercenary; soldier of fortune
…and a suggestion for any future editions:
3) An American elected official belonging to either the Republican or Democratic party

Renaissance Italy got a lot of things right. In terms of culture, art, commerce, and (in some ways) even government it was and is a shining exemplar. And yet, with that innate human capacity for recognizing and seizing on a bad idea we as American’s have taken to emulating an aspect of the human experience that the renaissance Italians didn’t do so well: warfare.

Some background will be instructive here. As stated above, the term Condottieri refers to the leader of one of many mercenary bands in Renaissance Italy.  In the plural it refers to these soldiers as a whole. The Italian peninsula of the time was divided among a kaleidoscopic array of small states, notably places like Florence, Genoa, and Venice, jostling for power and influence. These states, while prosperous, tended to lack strong native armies and thus had to turn to mercenaries to bolster their strength. Enter, the Condottieri.

I’m sure that you, my astute readers, have already spotted the major structural flaw in this system. Problems occur when you have a relatively small amount of employers (City-States/American States) all competing for a relatively small amount of employee’s (Condottieri/Career politicans and other insiders) who are providing a critical service (or what is perceived as a critical service) that the employers either can’t or believe they can’t provide for themselves. You have simultaneously created a situation where there is an incentive for conflict that the people or ’employers’ do not truly control or benefit from while removing any reason for the combatants to actually resolve anything.

As a consequence of this system, ‘conflict’ between bands of Condottieri tended to be as much an act of theater as it was of violence. It was bad for business to risk the loss of valuable soldiers and equipment with the hassle of actually fighting, and often the ‘battles’ between these groups would be arranged (with or without the lubricant of a bribe) beforehand between leaders with the actual fighting being a relatively bloodless affair. Loyalty became a very fluid concept, with the mercenary bands balancing the need to maintain a positive business reputation against the ever present profit motive. It became equally bad for business to gain a reputation among one’s fellow Condottieri as someone who could not be trusted to adhere to the rules, as someone who wouldn’t ‘play the game’.

Is any of this starting to sound familiar?

When did we, the American electorate, decide that we would replace the demand for leaders with a call to the Condottieri?

The parallels are kind of eerie when you start tugging on this particular thread. Cast in the role of the Condottieri are our politicians, Elephants and Donkeys alike. Playing the supporting role of the Italian city states are the American states. And the ‘battlefield’ has become Washington D.C.

And now, the farce begins…

In fulfillment of our role we (the electorate) begin the process by duly selection our champions every couple years. The prospective candidates preen themselves, make grandiose promises, and through laser precision hair splitting attempt to illustrate to the people how they are fresh, new, and different from their fellow contenders. Through clever tactics one candidate convinces a majority of their fellow citizens that, at long last, here is the soldier that will win them great victories. The losers duly retire to the lesser battlefields of the state capitols or as a lobbyist only to be regurgitated at the next possible chance to make it to the big time!

And so our heroes depart in splendor. Buoyed by the cheers and acclimation of their supporters they march off to Washington with armor gleaming, banners snapping in the wind, and trumpets to challenge the sky. The people rejoice, and then we go back to watching Food Network.

And they arrive! And across the smoke and haze of battle the forces align themselves. Elephants on one side, Donkeys on the other. A trumpet sounds! What is it? The leaders call for parlay.

And thus begins the real business of American political warfare. Deals are cut, decisions are made, hands shaken, promises made and half made, and the outcome decided out of view. The leaders return to their forces and we begin the play in earnest. Horns sound (forcible soundbites delivered on the media circuit), weapons clash (dramatic moments on the floor), and the forces charge. And over the din and clamor of filibusters and tough talk the American electorate forgets about the parlay, as we are meant to.

And one side will eventually retire from the field of battle, leaving some wounded on the field perhaps, but (if everyone observes the ‘rules’) never a true casualty. The other side proclaims victory and their supporters back home cheer! They won! And the armies assemble again for the next battle. No one suspecting that the ‘victory’ is meaningless. Bills so watered down with tacked on amendments that they fail to fulfill their original purpose. Or so neutered as to be not worth the paper they will be written on.

Now, occasionally, if for no other reason than simple statistics, and honest Condotttieri will make it through to the battlefield of Washington. At this point in the process the honest man or woman will look around in puzzlement, clanking open their visor they may even start ask questions as to the strange occurrence they just witnessed. Major procedural foul! On the first offense it may simply be a behind scenes beating, second offense might be the loss of some horses and equipment (committee spots and support for bills), beyond that?…well political bodies can be left on the field.

You see it’s the thing about theatrical warfare, it only works if everyone is on board. If you have 99/100 people pulling their punches and checking their swings but one guy who is going in earnest it becomes very hazardous for the actors. And since the farce of the American Condottieri is, if nothing else, quite lucrative for everyone involved (except of course for the people employing them) it becomes a vested interest that conflict be both eternal and ineffective.

Hail the conquering hero! War weary and battered mounted atop their tired steads they return in triumph to their home states. Displayed prominently before the triumphal procession are the glittering trophies won on their campaigns in Washington (some Federal dollars here and maybe a new construction project there). And we look up from our phones long enough to give them a cursory inspection and conclude “yeah….this person must be effective. I mean, look at that stuff…” And so we duly re-elect them or someone like them and back they go to the din and clamor of political warfare.

We really do eat this stuff up.

As loudly as I, and many others, may ‘tut’ in displeasure about this system we are stuck in our own perpetual kobayashi maru scenario. What are our options?

1) I don’t like the current (Democrat/Republican) so I’m gonna vote for his opponent! And thus was a Condotttieri subtracted from one side and added to the other. The play continues.

2) I don’t like the current (Democrat/Republican) so I’m gonna vote for a 3rd party candidate. Sure, kudos for intentions but you’re sending a lone warrior to face to well organized political armies. I’m sure the independent would be happy to flail away ineffectually for a few years but, once again, what have we accomplished?

3) I don’t like the current (Democrat/Republican) so I’m not going to vote at all. Others who have taken deeper and longer pulls from the red or blue Kool-aid will be happy to in your stead.

4) I don’t like the current (Democrat/Republican) so I’m not going to vote at all…I’m going stay home and order a pizza while watching Game of Thrones on election night.
Well, at least you have pizza and Game of Thrones…

While it’s tempting to blame those who march most rigidly in lockstep with the parties for this prison of futility we find ourselves in we all share blame. We’ve all done the “lesser of two evils” voting thing. We all tell ourselves “well, at least it’s not the other guy” etc etc. And we all tell ourselves that the theater of battle in Washington will, someday, accomplish something.

…there is always the pizza…