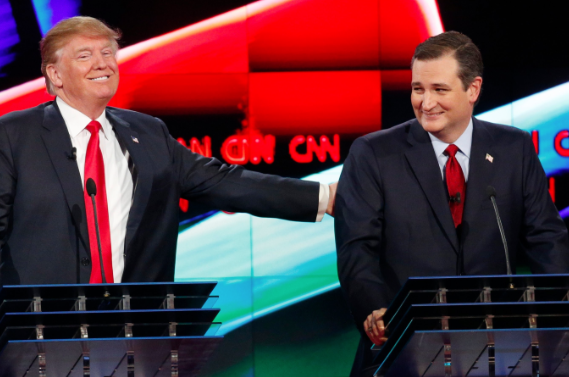 Despite early polls showing Donald Trump ahead in most of the states, the “Super Saturday” primary/caucus race ended with a 2 for 2 split between Senator Ted Cruz and businessman Donald Trump.  Cruz won Kansas and Maine and Trump winning Kentucky and Louisiana.  As of midnight Cruz won 64 delegates, Trump 49, Rupio 13 and Kasich 9.

“What we saw on Super Tuesday is what we’re seeing today, which is that there is only one candidate who can and has beaten Donald Trump repeatedly,” Cruz said in Idaho. “We’re going to win the nomination.”

Despite the fact that Sen. Marco Rubio’s only win was March 1 in Minnesota, he says he will remain in the race as he faces his home state of Florida on March 15.

Even further behind with only 34 delegates is Gov. John Kasich who also insists on staying in the race, hoping to win his home state Ohio.  He is scheduled to campaign there with Arnold Schwarzenegger.