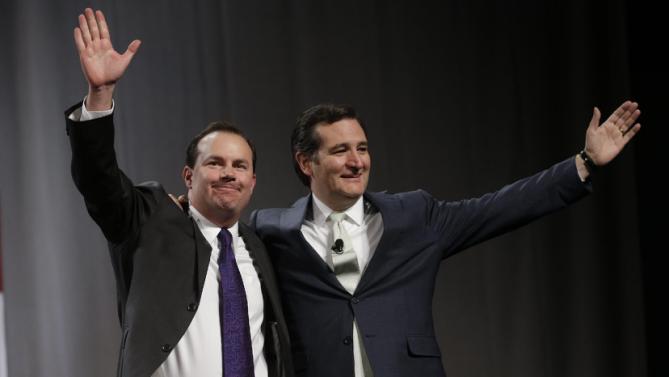 Utah Senator Mike Lee announced on Thursday to reporters that he is endorsing Ted Cruz for President, becoming the first sitting U.S. senator to back his fellow colleague.

GOP front-runner Donald Trump has hit Cruz in the past for not being able to gain any support or endorsement from his colleagues. This endorsement in Rubio’s own backyard comes in days before the Florida Republican primary as many GOP leaders are now looking to the Texas Senator as the only viable candidate who has the best chance to stop Trump as its last hope.

When asked if Rubio should drop out the race, Lee recommended that its time to get out of the race and support Cruz. “Everyone will have to make that choice,” Lee answered. “If Senator Rubio were asking me that, I would encourage him, to get behind Ted Cruz

Noting Cruz’s promises in protecting and upholding Conservative values in the senate, Lee praised the Texas Senator and is the reason for his endorsement. “Ted is a leader with a proven record of fighting for our conservative values and for the issues that matter most to Americans,” Lee stated. “[Ted] has shown time and again that he is willing to stand up to Washington.”

“Ted has kept those promises and every other promise he has made to the people of Texas,” Lee added. “It it with that trust that he has earned that he will move forward and unite our party. It is time to elect Ted Cruz as the next president of the United States.”

Calling Cruz a “close personal friend,” Lee noted that even though he is the first sitting senator to throw his support to Cruz, many other GOP senators will follow suit. “I expect that I’ll be the first of many Republican senators who will endorse Ted Cruz,” he said. “I’m confident that more are on the way, and I welcome others to join me.”

In the past, Lee declined to formally endorse Cruz, or the two other Senators, Rubio and Rand Paul, citing he was very close with all three. “One of the weirdest things that can happen to a person is to have his three favorite co-workers all running for president of the United States at the same time,” Lee said in December when asked who would he endorsed.

Now Paul has dropped out early February to focus on his reelection seat in Kentucky, it was down to two young Senators for Lee to decide. With Rubio’s campaign on life support heading into next Tuesday’s contest, with all or nothing left in his home state of Florida, Cruz is having a good week. He has already won seven contested states and gained a total count of 359 delegates, establishing himself as the candidate with the best chance to defeat Trump.

An endorsement from Lee is a sign that the Republican Party is ready to line up behind Cruz.

After the conference, Cruz’s campaign release a statement of Lee’s endorsement:

“I couldn’t be more humbled by Mike’s endorsement,” said Cruz. “He has been a tremendous friend and I am deeply honored by his support.  No one has fought harder to restore the rule of law, end cronyism, and level the playing field for millions of Americans.  Mike is a brilliant policy entrepreneur who has been a driving force in promoting conservative reforms to lift people out of poverty, make education more affordable, and fix our tax system. I am privileged to have his support and look forward to having his help coalescing conservatives around our campaign.”

Mississippi Dr. Bill Simpson: "Trump is Not the Problem, Merely the Symptom."

Ben Carson To Endorse Donald Trump According to Sources