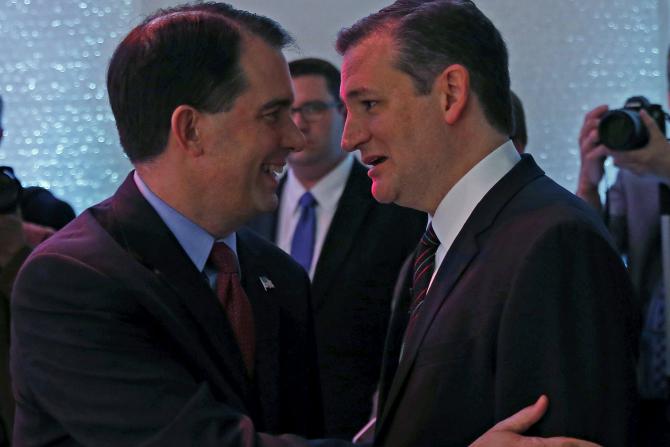 With just a week away before a pivotal Republican primary in Wisconsin, Governor Scott Walker announced he is endorsing Texas Senator Ted Cruz for president.

“After all these years of the Obama-Clinton failures, it’s time we elect a strong new leader, and I’ve chosen to endorse Ted Cruz,” Walker said Tuesday on Charlie Sykes’ radio show on WTMJ. “Ted Cruz is the best positioned by far to both win the nomination of the Republican Party and to then go on and defeat Hillary Clinton in the fall of this year and that’s the key.”

After the failed Obama-Clinton Admin, Americans want leadership. I endorse @TedCruz, a principled constitutional conservative who can win.

Last week, Walker signaled he would throw his support behind Senator Ted Cruz. He indicted that Cruz is the only remaining GOP candidate who can defeat Donald Trump.
“If you’re someone who’s uneasy with the front runner, right now there’s really only one candidate, I think, if you’re just looking at the numbers objectively and that is Ted Cruz,” Walker said. “Cruz is the only one other than Donald Trump who has a chance to win the nomination statistically. My friend John Kasich cannot.”

On a campaign stop Monday, Cruz praised his former rival, calling his fight against the unions inspiring. “It inspired people all over the country, it inspired millions, it inspired me,” Cruz said about Walker’s fight with the union, pointing out that special interests can be defeated. “It is that spirit, that fight, that’s at the heart of what our campaign is all about.”

“I am a big, big fan of Scott Walker,” Cruz said. “He is a terrific governor and a strong conservative. Of course, I welcome his support.”

Walker listed three things that helped guide his decision to endorse Cruz. “One, I just fundamentally believe that he is a constitutional conservative,” Walker said. “We need a leader in Washington who understands that our founders intended for the power really to be in the states and most importantly in the hands of the people not concentrated in Washington and Ted Cruz not only believed that, he has shown he is willing to act on that.”

“Secondly, I think really important here in Wisconsin and that we have shown, that we know how to take on the big government special interest and really put the power back in the hands of the hard-working taxpayers,” Walker continued. “That is something that Ted Cruz has not only talked about in his campaign but has shown he is not afraid to take on the big government special interests, even sometimes when they are aligned with our own party.”

“And third, a very practical point that I fundamentally believe if you look at the facts, you look at the numbers, Ted Cruz is best positioned by far to both win the nomination and to then go on to defeat Hillary Clinton.”

The former 2016 hopeful expressed his skepticism of the front-runner Donald Trump. When exiting the race in September of last year, Walker stated he ended his short-lived campaign “to help clear the field in this race, so that a positive conservative message can rise to the top of the field.”

When it was announced that Walker was planning to announce his endorsement, Trump didn’t expect to be on the Governor’s list of choices. “After the way I beat Gov. Scott Walker (and Jeb, Rand, Marco and all others) in the Presidential Primaries, no way he would ever endorse me!” Trump tweeted.

“Governor Walker has been an outstanding leader in the conservative movement and I’m honored to have his endorsement,” Cruz said. “Gov. Walker courageously stood up to special interests and won in a bitter fight in Wisconsin. His leadership has made a profound impact on the people of Wisconsin and I welcome his advice on how we can unite the Republican Party and defeat Hillary Clinton in November.”

Here is the audio of Walker’s endorsement: