“The U.S. has enough problems without publicity seekers going out and openly mocking… in order to provoke attacks….”

“We have enough problems without taunting and driving everybody 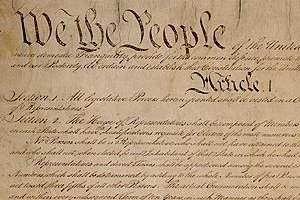 The first Amendment guarantees that all citizens’ speech is protected from the government, as are all the rest of the rights in our Bill of Rights. While the Supreme Court has sometimes ruled that, when necessary, the government has the right to interfere with our freedom of speech such as when there is an incitement to commit violence, these are rare occurrences.

People who regularly read my articles know I love to use quotes to get certain points across.  Edmund Burke once said that, “Men qualify for freedom in exact proportion to their disposition to put moral chains on their own appetites. Society cannot exist unless a controlling power is put somewhere on will and appetite, and the less of it there is within, the more there must be without. It is ordained in the eternal constitution of things that men of intemperate minds cannot be free. Their passions forge their fetters.”

Professional Baseball player who became one of the most influential Christian evangelists in America, Billy Sunday once quipped, “I dare not exercise personal liberty if it infringes on the liberty of others.”

While our freedoms which are protected in our Constitution are inherent, as with anything we do or say, our freedoms come with a certain sense to use them in a responsible way. Common sense tells us that anything we do, even if we have the right to do them, there are consequences one needs to weigh if we choose to act or say something irresponsible or vitriolic.

There has been a lot of talk the past few days about the 1st Amendment right to freedom of speech since the events which caused Donald Trump to cancel his rally in Chicago. Incredulously in the time since, people have been vilifying fellow Candidate Senator Ted Cruz for somehow not standing up for Trump’s freedom of speech.

It’s interesting the amount of contentious opinions this has generated all across the social and media sites.  I’ve read so many harsh words for Cruz, comparing him to a traitor, some calling him spineless and plenty of foul words I can’t repeat here, all because when he denounced the leftist activist groups who swarmed and shut down the Chicago rally, he dared to hold Donald Trump’s campaign accountable as well.

“Political discourse should occur in this country, without a threat of violence. Without anger and rage and hatred directed at each other. We need to learn to have disagreements without being disagreeable; we have to have disagreements while respecting human beings on the other side. Earlier today, over 30 people were arrested at one rally, and then tonight as violence broke out, the rally was cancelled altogether. Now the responsibility with that lies with protesters who took violence into their own hands.”

I’m not sure if the people excoriating Cruz even heard that part, because they’ve only been focused on what he said immediately after, as if he gave the protesters a pass.

It is undeniable  that Trump says vitriolic things at his rallies, and while that doesn’t give anyone the right to shut down his right of expression, speech and association, it does make one question his sense of responsibility and motive.

In defense of Trump’s right to speak, some people believe we need to stir up the haters and face them down because they believe this will make the protesters go away.  They can’t stand what the agitators do, yet somehow they give Trump a pass to do the same.  Yes, they are his events, and people have a right to speak without being shouted down.  Leftists are good at what they do, as they’ve been doing it at Universities and other bastions of ‘tolerance and free thought’ all across our country for years.

But is meeting disruptive, rude, obnoxious and potential violent behavior with more violent, obnoxious, rude and disruptive behavior the way to do it?

Ted Cruz has been steadily facing the likes of Code Pink, anti-gun advocates and other protesters yet he’s handled things with class and without the “punch them in the face” mentality that Trump reminisces about.  Cruz’s comments about the protest were spot on, but people don’t like it because he included Trump’s part in it. Some people would prefer to shoot the messenger instead of laying any responsibility on Donald Trump for what’s been happening at his events and for this past rally incident.

Nothing warrants senseless violence and the near rioting we saw in Chicago, but people have to start taking responsibility for the people they associate with or support, and the things that they say or do which is stirring up so much of it. Donald Trump didn’t start the division in this country, but like everything else he does, he is using it for his own gain and attention. Trump is adding to it
as much as Obama has promoted it. We as a country can’t take another term of the same kind of vitriol.

Oh. And one last thought about those quotes at the beginning of this article… Where were all of these same freedom of speech advocates when Donald Trump said those things to Pamela Geller when he blamed her for the attempted shooting attack by Muslims in Garland, Texas?

On the Eve of Florida Primary, it’s Do or Die for Marco-mentum