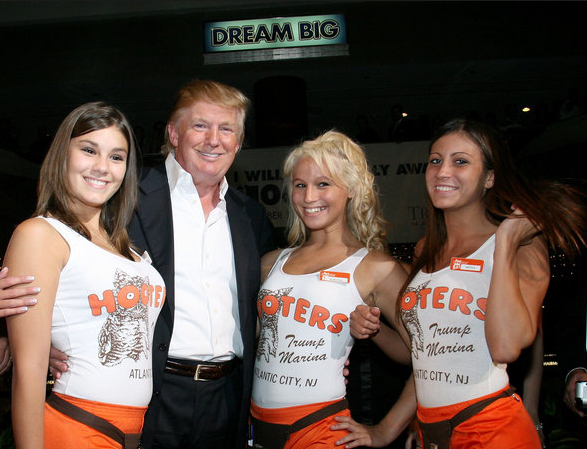 “You know, it really doesn’t matter what they write as long as you’ve got a young and beautiful piece of ass.” ~Donald Trump, Esquire, 1991

This week a #NeverDonald PAC–which is not affiliated with the Cruz campaign–tweeted an ad that featured a scantily clad British GQ cover photo of his wife Melania.  As a former model, Melania has been featured in many provocative photo spreads over the years, some with clothes, some with much less.  This isn’t anything new to the world–after all, GQ is a major publication.  And  prior to this week, Donald has always publicly bragged and boasted about his wife’s extraordinary beauty and he’s never tried to hide any of her very-easy-to-find photos.

But the real story-behind-the-story that no one is reporting is now, after years of publicly discussing his sexual conquests and immense love of young, hot women’s bodies, Donald Trump is a suddenly a prude!

On Tuesday Trump once again became the bully on the Twitter playground, acting like a scorned junior high girl sending out his usual threats.  Unfortunately instead of threatening Ted Cruz, who had nothing to do with the ad, Trump struck out at someone who had even less to do with any of it: Ted’s wife.

Lyin’ Ted Cruz just used a picture of Melania from a G.Q. shoot in his ad. Be careful, Lyin’ Ted, or I will spill the beans on your wife!

Pic of your wife not from us. Donald, if you try to attack Heidi, you’re more of a coward than I thought. #classless https://t.co/0QpKSnjgnE

Apparently Trump wasn’t going to allow a little thing like “I had nothing to do with it” stop him from doubling-down on his attacks.  Only this time he decided to go after the one thing he seems to despise:  Older/Aging Women.  Trump retweeted a meme comparing older Heidi to younger Melania:

Senator Cruz was a much bigger man than I would have been with his response:

Donald, real men don’t attack women. Your wife is lovely, and Heidi is the love of my life. https://t.co/pprXhIMzUT

So okay, Donald, that’s it.  As an Older/Aging Woman, it’s my turn.

For those of us who’ve followed Donald Trump’s career through the years, it comes as no surprise that he has a very strong, very public penchant for young, “hot” women.  Possibly because of this, Trump was a regular on the Howard Stern Radio Show and sorry Mom, but throughout the 1990’s and early 2000’s I was a regular listener. The show aired on my long commute to work and although very crass and considerably degrading to women (unless you were young and “hot”), it was also a really funny show. 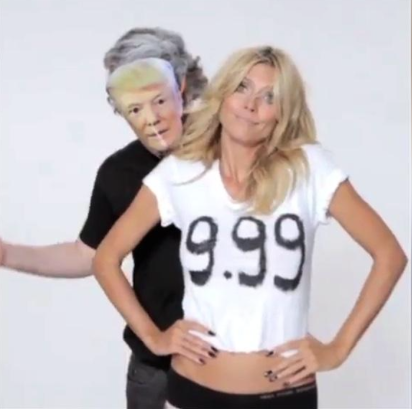 The main topic of conversation between Stern and Trump was sex.  Howard was insanely curious about all of the young, hot women Trump had slept with and in turn, Trump was eager to tell the world about it in as many vulgar details as possible.  One of their ongoing bits was to rate women’s appearances between 1-10 and believe me, for Trump to rate anyone a “10”she had to be especially young and hot.  And I mean young Heidi Klum hot–not, of course, Older/Aging Heidi Klum, who Trump said is “sadly” no longer a 10…

In February 2016, Buzzfeed released the transcripts of some of Trump’s appearances on Howard Stern. The following are Trump’s actual comments (unedited–again, sorry Mom) regarding his standards of “beauty”:

Ex-wife Marla Maples (whom he cheated on while married to his first wife Ivana):  “Nice tits, no brains.”

Marcia Cross: “Would you go out with Marcia Cross or would you turn gay, Howard?” He later added she was a “solid four to five”.
Nicollette Sheridan:  “Solid four…I liked the way she used to look.”
Teri Hatcher:  “A six.”
Eva Longoria, who he ranked a seven:  “She’s really bouncy, really cute, she’s got beautiful skin…”

Carmen Electra:  “The boob job is terrible–they look like two light posts coming out of a body.”

In a 2005 interview, Trump talked about how he wanted to have more kids with new wife Melania: “I mean, I won’t do anything to take care of them.”

List of women Trump would have slept with, in order (after admitting some were there for “political reasons”):
Melania Knauss (his girlfriend at the time)
Ivana Trump (his first wife)
Princess Diana
Michelle Pfeiffer
Cameron Diaz
Julia Roberts
Cindy Crawford
Mariah Carey
Gwyneth Paltrow
Diane Sawyer

“You know who’s one of the great beauties of the world, according to everybody? And I helped create her. Ivanka. My daughter, Ivanka. She’s 6 feet tall, she’s got the best body. She made a lot money as a model—a tremendous amount.” (The Howard Stern Show, 2003)

On Kim Kardashian (from various Stern interviews):  “Does she have a good body? No. Does she have a fat ass? Absolutely…It’s record setting,” he said in 2014. “In the old days, they’d say she’s got a bad body.”  “She’s got a huge trunk…It’s seriously big.”

Jennifer Lopez:  “I really like J-Lo…But that ass is…”

Jennifer Lawrence: “Jennifer has a little skin problem. A little rough with the skin. I don’t quite get it.  Little polka-dots all over the place.”

And here are a few other Trump quotes about women from various publications over the years:

“When a man leaves a woman, especially when it was perceived that he has left for a piece of ass—a good one!— there are 50 percent of the population who will love the woman who was left.” (Vanity Fair, September 1990)

On the fact that Melania only hires unattractive workers in their home: “They’re not tens, I can tell you that…I’ve been very domesticated. It’s a sad event.”

(See the Buzzfeed article HERE where you’ll be able to listen to snippets of Trump talking about sex, hot young women, ugly fat women, and a full conversation about breast implants, including Trump’s belief that anyone who gets a breast reduction “is insane”…)

Hate to end this way but if Trump makes it to Washington Melania might work on hiding all of the young, hot interns.  And if the Left believes there’s a Republican Party ‘war on women’ now, Lord help us…

While Brussels Burns, President Obama Does the Tango