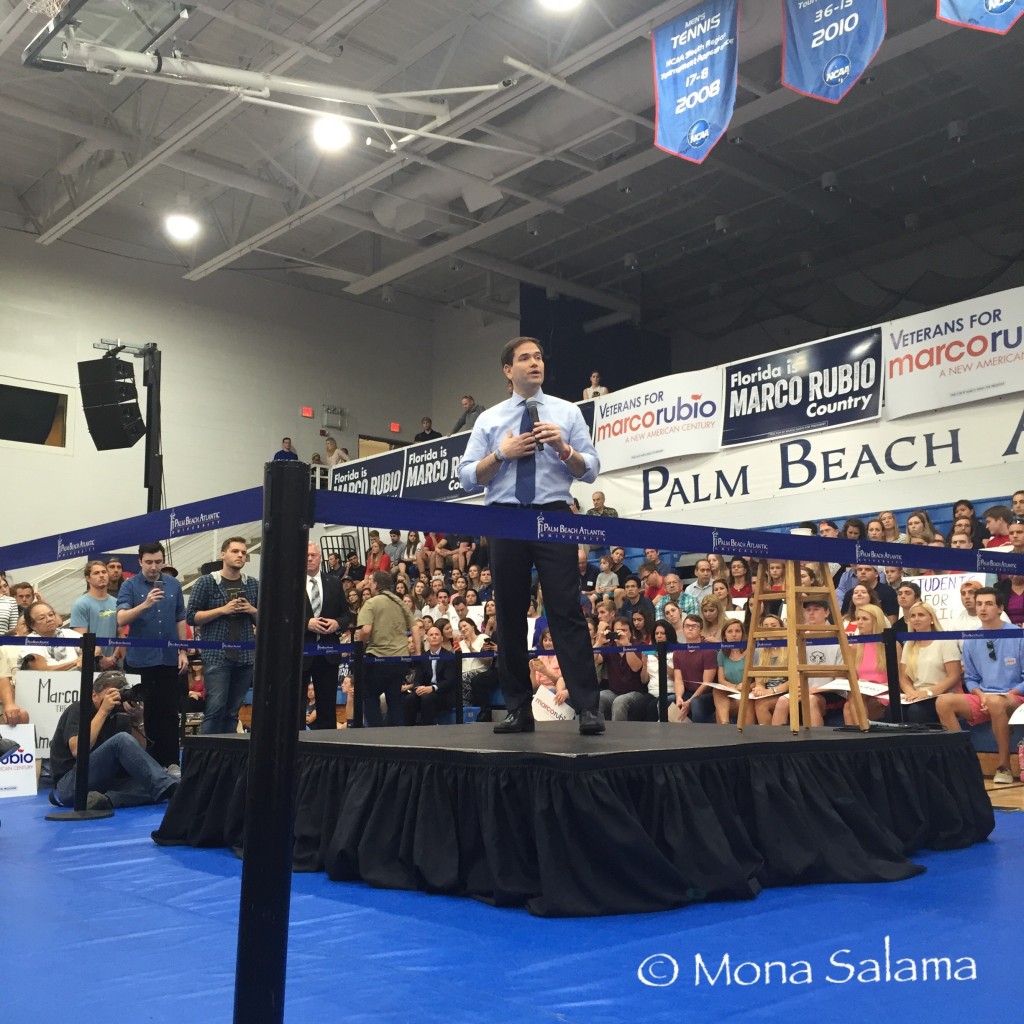 Miami, Florida– It’s no secret that Senator Marco Rubio has put it all on the line in his own home state of Florida, but with Trump poised to seal the deal to give the fatal blow to Rubio’s presidential campaign, the stakes have never been higher.

The front-runner is leading the Florida Senator by double digit, painting a dire picture for Rubio, who has yet to lead in any survey, unlike John Kasich, who is leading in some polls in his home state while others show him in a tie with the front-runner.

Fighting in his last hope to win Florida’s primary before Florida decides his political future, Rubio campaign through the I-95, making appearances in Melbourne, West Palm Beach and West Miami, making the case that is seen to be potentially his last day of his presidential campaign.

“It all comes down to Florida,” Rubio declared at events all day Monday.

For the past week, Rubio has spent his time gambling his political future campaigning in his home state in an all out effort to win the state’s 99 delegates. Ignoring the four other contested states that are also voting on Tuesday, Rubio is hoping to stop Trump’s momentum by making sure he is denied the chance to win the biggest prize of Super Tuesday 3 – Florida huge delegation count.

Even if Rubio were to lose Florida on Tuesday, he told reporters that he will still continue to go forward looking into Utah, the next contested primary state, while making a stop in California for campaign finance. But rumors are circulating that Rubio can’t believe he has the “Marco-momentum” to continue forward. A lost in his home state will lead to donors closing their checkbooks and the pressure to drop out will continue to grow since he has shot to become the nominee.

Another problem Rubio face is his rival, another fellow Cuban, Senator Ted Cruz. Both are courting the Hispanic votes to stop Trump, but only one can prove he has the chance to stop the front-runner from accumulating the 1,237 delegates needed to become the nominee. With both dividing the votes, every contested primary gives Trump the chance to expand his delegate lead over both Senators. However, Cruz is seen to be the only candidate remaining in the GOP to stop Trump, mostly due to the fact that the Texas Senator has accumulated 370 delegates so far, only 99 behind the front-runner. With Cruz receiving Senator Mike Lee endorsement last week prior to the Miami GOP debate, other anti-Trump figures are seen to follow suit, all while asking Rubio to step aside to help defeat Trump.

Entering West Palm Beach, his mid afternoon campaign stop, Rubio made an appearance to a packed gymnasium at Palm Beach Atlantic University to the song “My House” by Flo Rida. Opening his speech reminiscing to 11 months ago when he announced his presidential bid in Miami, Rubio made a plea to his supporters while expressing his regrets of past rhetoric he made that is said to cost him many key victories.

“A few weeks ago, I responded to some attacks about the size of my ears and something else with an attack about— I’m not going to repeat it,” Rubio said. “I felt terrible about it and I realized that win or lose, there are people out there that see what I am doing and follow it as a role model.”

After months staying away from the fray, watching one after one of his rivals attacking the front-runner to stop his momentum, only to drop out due to low poll numbers, Rubio attempted to try to do the inevitable. In late February, right before Super Tuesday, Rubio went full-on attack mode, going after Trump, by calling him a “con-artist” while mocking his manhood by implying his hand size and his “fake tan.” The negative attack lasted for two weeks until Rubio failed to pick up delegates in key states and saw his poll numbers significantly drop. Since then, the Florida Senator has seen his chances slipping away and began to focus on his home state. 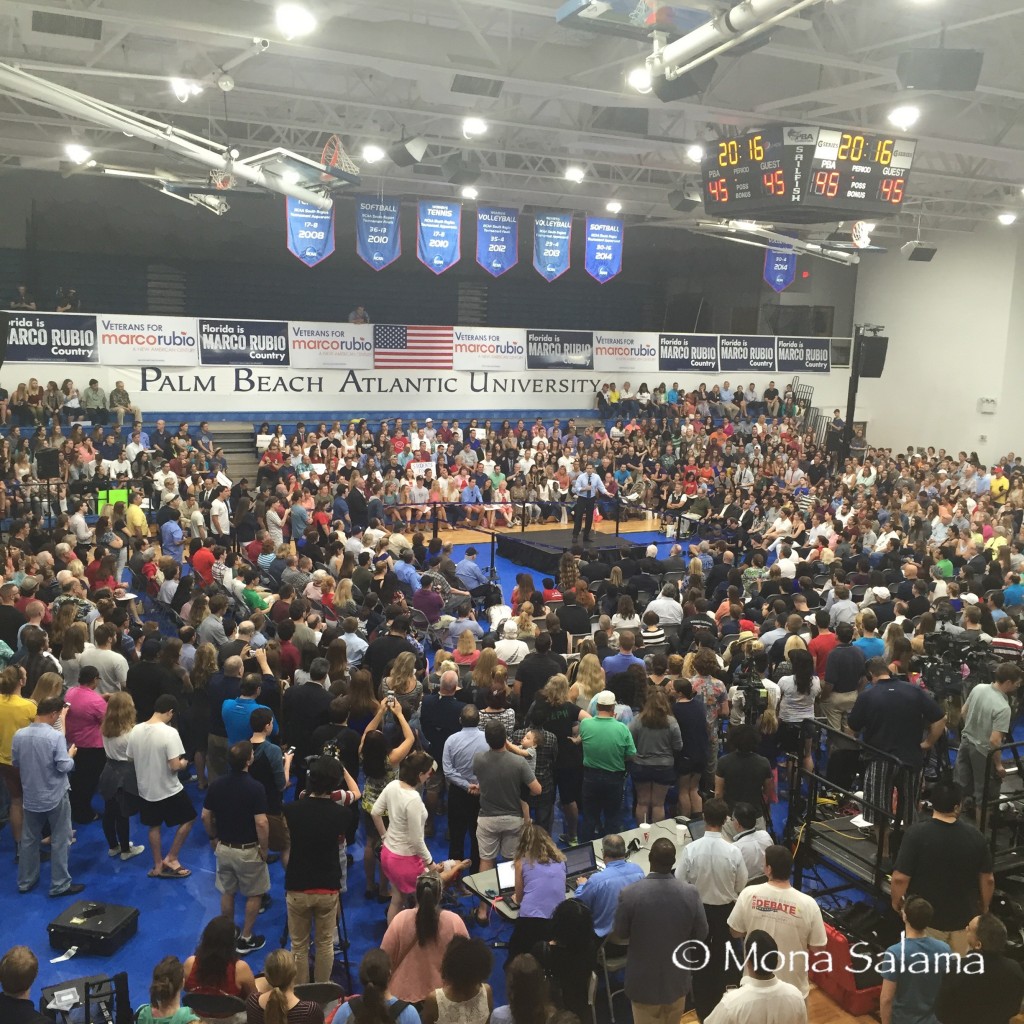 Instead of restoring to low-blow attacks against the front-runner, Rubio attacked the front-runner based on his rhetoric that has escalated into scuffles and problems from protestors attending Trump’s rallies. On Friday, Trump campaign postponed a campaign stop in Chicago amid security concerns from large protestors gathering to stop Trump from holding his event.

The unrest in Chicago could have worked against the front-runner as his rivals this past weekend bashed the rhetoric coming from Trump is causing the nation to divide more. However, a recent poll from Monmouth University found that 60% of Republicans said the scene from Chicago wasn’t Trump fault whatsoever while 22% said they would now vote for Trump because of what happened in Chicago.

“The presidency is not a reality TV show, it is not a political version of Survivor,” Rubio said. “I know policy debates can be boring while call each other names can be exciting. But we are not a Third World country.”

However, latest polls released ahead of Florida critical primaries show Trump maintaining a double-digit lead over Rubio, ready to deliver a knockout blow to Rubio. The new Quinnipac University released Monday morning has Trump with a wide lead to Rubio 46% to 22%. For months, there has yet been a poll that showed Rubio winning in his own state. However, Rubio might have a shot with early voting where a record of 1 million Floridians republicans turned out to cast their ballot. If those who cast an early vote for Rubio, it can possibly give him the lead over Trump and the victory. But overall, all signs point to Rubio losing Florida and with it any chance of becoming the Republican nominee. 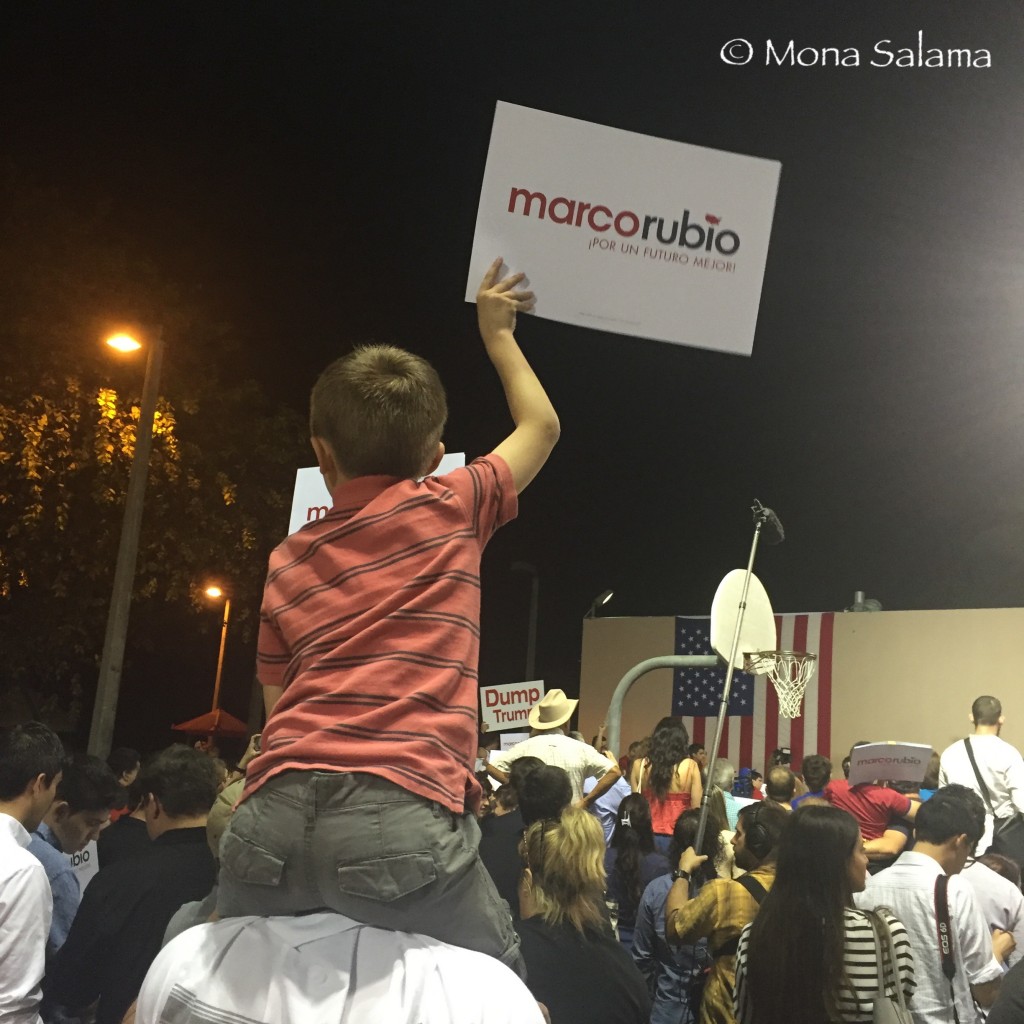 In a packed auditorium filled with many young supporters, many are refusing to give up on their local senator. “Rubio is the best representative for the state of Florida and I feel comfortable to support and vote for him,” Morgan McCanse, 19, told PolitiChicks when asked why she supports Rubio. “I think he has a shot and I am praying he will win tomorrow. I don’t want Trump to win because all he does is make fun of the cripple and women.”

“Rubio has a shot, Florida favors him the most,” Daniel Novella, 20, said to PolitiChicks. Daniel friend Elise Caraker, 21, said Rubio is realistic compare to the other candidates. “Rubio promises a lot because it is a campaign, so he has to say a lot to win votes. But, realistically he says a lot of realistic things than one who says he is going to build a wall or make you rich.” When ask if she thinks Rubio will win, Elise said it’s doubtful due to the polls that show that he isn’t going to win against Trump.

An enthusiastic supporter of Rubio, Brandon Marlow, 24, said Rubio has a shot, but if not there is 2018 for Governor. “I think Rubio has a shot tomorrow, but the best is yet to come,” Brandon told PolitiChicks. “If not, he might make a great Governor of Florida in 2018.”

His final rally, coined a homecoming rally, Rubio spoke on top of a back flatbed pick-up truck parked in a playground in West Miami, addressing his closest supporters and neighbors using a bullhorn. Speaking mostly in Spanish, Rubio told supporters a large turnout is a must or else he isn’t sure he is going to win.

“If this community doesn’t vote in historic numbers, I don’t know if I will be able to win,” Rubio said in Spanish. 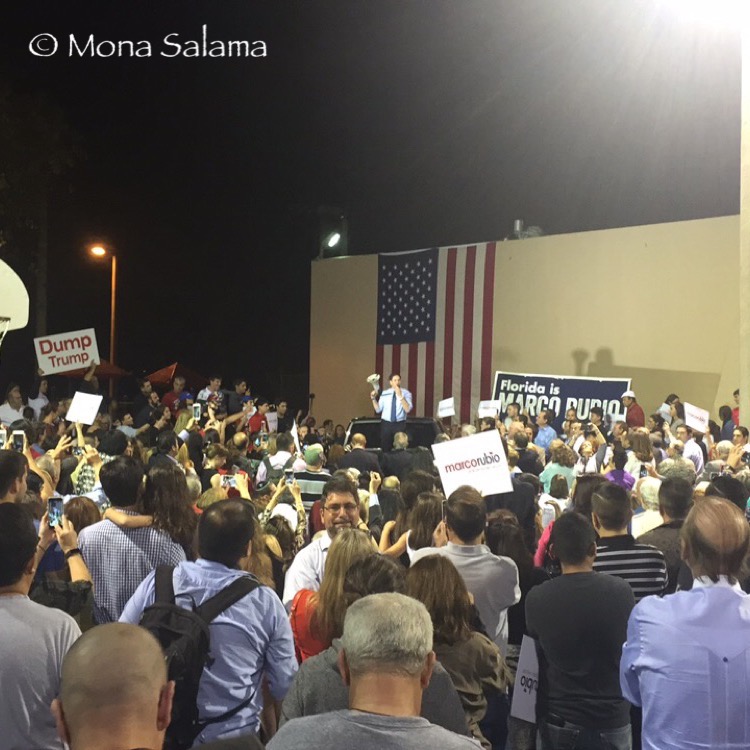 “On the eve of the most important election in a generation, in the state that always makes the difference, this community is going to take us over the top and we are going to win this election,” Rubio said putting a brave face on. “It’s an honor to be here, in the neighborhood where I grew up and the park where I used to slam-dunk basketballs.”

“Make sure no one stays home,” Rubio added. “We don’t know how close, this is going to be, but if it’s close and it comes down to a few hundred votes, they could be coming from our neighbors, so let’s make sure everyone you know goes out and votes tomorrow.

“We need every vote and everyone to vote tomorrow.”