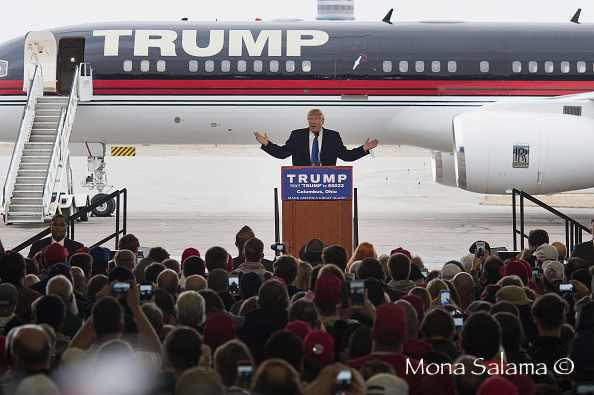 Columbus, Ohio — With a dozen of states voting on Super Tuesday, the GOP front runner Donald Trump held a rally in Ohio even though the Buckeye voters doesn’t head to the polls for another two weeks.

“Ohio’s vote in two weeks is crucial,” Trump said to a crowd of about 5,000 gathered at Port Columbus International Airport. “It’s going to send a signal like nothing else. Winning Ohio is so, so important.”

Trump briefly mentioned the Ohio Governor John Kasich, who is also one of the five remaining contenders vying for the GOP nomination. “Did you ever hear of a guy named Kasich,” Trump asked the crowd as they began to boo. “I like him, but it helps when you state happens to hit oil.”

Recent polls in Ohio show Trump is leading over Kasich 31% to 26%. A total of 66 delegates are up for grabs and the winner takes all on March 15.

Joining Trump was New Jersey Governor Chris Christie, who introduced him enthusiastically to the packed crowd of thousands while bashing his former two GOP rivals, Senator Ted Cruz and Marco Rubio. “We don’t need two twins from Washington D.C. in the Oval Office,” Christie said. “Listen Ohio, get ready, because in the next two weeks, his desperate opponents will say and do anything just to try to tear him down. But you know the truth. the strongest leader of this race is Donald J. Trump.”

In his speech with his private jet parked behind him outside the hangar at the airport, Trump slammed his two major rivals, calling Rubio, “Little Marco,” and Cruz “Lying Ted.” Responding to one of Rubio’s latest snarky remarks he made on Sunday in regards to Trump’s hands, the real estate mogul said he has “beautiful hands,” and he never “heard that one before” as he showed his hands to the crowd to see.

“Now the other day I hear Rubio say I have small hands,” Trump said. “Actually, I’m 6-3 not 6-2. But he said I had small hands. They are not small. I never heard that one before, I always had people say, ‘Donald, you have the most beautiful hands.’”

Trump also said that Hillary “criminal act” in regards to her usage of her personal email accounts on a private server during her tenure as Secretary of State should disqualify her from becoming president. “Hillary Clinton cannot do the job,” Trump said. “She shouldn’t be allowed to do the job because what she did was a criminal act. She shouldn’t be allowed to run.”

On polls of a general match up between Trump and Hillary, he said there are many polls that show he would beat her in the general election, adding he hasn’t even begun attacking her yet. “In all fairness, I haven’t even started about that yet,” Trump said.

One of the key issues in Ohio is manufacturing. Trump vows as president to keep companies from leaving America. During his speech, he gave a mock conversation of how as president he would call a company’s president if they plan to relocate their company to another country. “We are going to charge you a 35% tax on every air conditioning unit that you send across the borders to the United States,” Trump said using Carrier Corporation as an example of the company that plans to relocate from Indiana to Mexico. “And within 24 hours, I will get a call back, probably from the head of Carrier, and he is going to say, ‘Mr. President, I would like to inform you that we are not going to move out of the United States.”

As for the protestors, a Trump rally wouldn’t be fun if there weren’t one to try to interrupt Trump while he is speaking. During the rally, Trump was briefly interrupted six times. “Is a Trump rally the most fun?” Trump said during the time one of the protestors were removed from the event. “I love my protestors.”

"Snapchat Generation" Weighs In On the 2016 Race

Unfit to Be President?