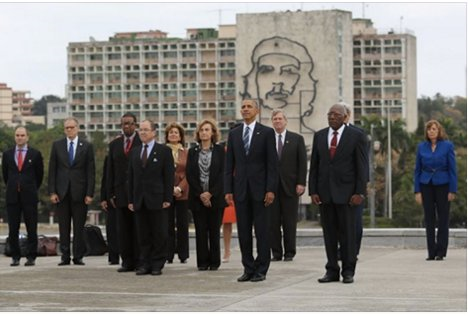 Here we are – swamped by the “wonderful” news: “Obama Tours Old Havana in Pouring Rain!” The headline screams: “Obama in Cuba: ‘It’s wonderful to be here!’” What tops it all? The picture (right) in which America’s president is posing in front of a humongous portrait of Che Guevara – the communist mass murderer, revolutionary, who once swore on an image of the then recently deceased Joseph Stalin: “not to rest until the capitalist octopuses have been vanquished!”

The larger-than-life portrait of this communist animal’s head in the background reminds me of the past. In 1987, I visited Romania under Ceausescu. At the time, I lived in communist Czechoslovakia and we were only allowed to travel into other communist countries. As a rule, the further east you went, the poorer and more communist-ravaged the land and population. I saw similar huge portraits of the Romanian dictator on walls and buildings. Streets were literally lined with them: Big Brother everywhere! Four years later, they would all be torn down and destroyed – and the Great Dictator also killed, Mussolini style, but 1987 was still marked as the Dark Ages of Communism.

At that time, Romania was as poor as it gets: naked children lined the train coming from “the west” begging for anything we could spare, hungrily reaching out, gathering candies from the ground. A trip east for us was the trip to our own future then… At night, the train was invaded by hordes of thieves and whatever was not securely attached was stolen. I recall the person sleeping on the bunk above me had her trunk picked from under her head and pulled out of the window as she was lying there, not even asleep – all of a sudden, the window slid open and someone pulled the trunk out. It happened in a matter of seconds!

We passed through Constanta and arrived at the Black sea. It was dark and lifeless, just like the country it shored. A man on the shore was selling small fish which resembled mackerel. Eagerly, we purchased two, looking forward to a somewhat “oriental” feast, for we were “Drylanders” from Central Europe, not bordered by any sea. The fish were salt-soaked, weeks old, dried up in the sun and completely inedible. What else do they have to eat? we wondered, venturing to a local “supermarket.”

There were shelves with three things on display: Vodka, beans, and toilet paper – no milk, meat, yoghurt… nothing at all, not even bread! Later, we were told that milk and bread was available only to the locals, to be purchased at special allotment of meal tickets. Only pregnant mothers received more milk tickets, perhaps even once a week, the rest once a month, depending on the number of children in the family…

However, what surprised me the most was the absolute lack of complaints. People looked haggard, depressed, but tough. When you spoke to them, they rejoined in proud communist gestures. We had a carton of powdered milk we did not use by the time we were leaving so we decided to exchange it for a souvenir. I do not recall want knick-knack bric-a-brac it was, a pleated basket, a folklore napkin, perhaps… All I can recall is a lanky old man staring straight back at me with spite in his eyes saying in broken German he did not want my milk. I asked why. He went back behind a drape and returned with a can of beans in one hand and a framed portrait of Ceausescu in the other. “I have this – and this!” he said, flashing a row of teeth decayed by years of socialist healthcare.

If Obama was not Obama but an ordinary person going to Cuba on a vacation, there is no doubt in my mind that is what he would have experienced. Yesterday, I listened to interviews with Cuban people on CCTV: a teacher extolled the virtues of socialist education, women’s equality, how Cuban literacy rates exceed those in the U.S. (?) etc.; then there was a restaurant owner proudly displaying the U.S. flag, albeit only in the last few days and inside, he said, he had a portrait of Obama side by Castro on the wall! A local professor of political science was interviewed: “Not since 1928 has there been a presidential visit. Capitalist interventions have prevented it.” Finally, a teacher of English, with a suspiciously perfect native American accent went on to emphasize how much “Americans” have yet to learn from Cuba…

Naturally, what the reporter failed to mention was that all the people interviewed had been either carefully selected and approved by the apparatchiks of the local Politburo or simply indoctrinated socialists afraid for their Party Card and cozy position in “the system.” Yes, it is all about “the system” – not the individual! I recalled the eyes of the haggard old man holding the picture of Ceausescu and a can of beans…

Watching these “interviews,” one can only marvel at complete absence of any criticism! To me, however, it is self-explanatory, although it cannot quite be explained in words: ideology beats reason. Criticism is what makes US better – individually and as a society. Criticism and dialogue is what undermines every totalitarian system at any stage of development, what reveals corruption, discloses deficiencies.

Here, in the United States, we believe in Pragmatism, tempered by meliorism. Pragmatism says that the effects caused by an object define that object. In other words, our concepts are not ideas but effects. Meliorism says that we cannot achieve perfection in anything but this should not detract from our trying constantly to improve. We also believe in work ethics, especially those tied to Protestantism: a healthy individual is the source a healthy society – healthy in the mind and in the body. We cannot achieve greatness by stealing or ravaging.

I grew up in communism – to criticize the system was the most grievous of transgressions. Murderers used to receive less “time” than “political rebels.” We have all heard of the American student sentenced to 15 years of hard labor for allegedly stealing some advertising plaque. Imagine if he had actually smuggled in George Orwell’s Animal Farm or 1984 and wanted to distribute it in some unofficial manner!

Do you recall what the motto of the Colonists was around the time of the Townsend Acts, in particular the Stamp Act and the Tea Act? To remain silent in face of such exploitation was deemed un-American and treasonous! Those who sat at home in silence were “not real Americans” but traitors complicit in the evils of the Crown! No Taxation without Representation meant that “no private property” could be taken “without the consent of the owner!” Paradoxically, this motto was founded on the strict property laws of Great Britain. Imagine someone taking a picture with the portrait of King George and having it published in Ben Franklin’s paper!

“Silence means slavery!” Sam Adams would say. That is what socialists-cum-communists want US to be: silently complicit, slaves to the system, nodding to them with a portrait of Obama or Sanders in one hand and a can of beans in the other, smiling our toothless Obamacare smile at the “hyphenated-American” reporter asking us with a heavy accent how we like it…

Well, we don’t – and we won’t! We are the Land of Doers, not empty-headed “dreamers” and organized disrupters who want to silence US!

Daniel Greenfield: Activism U and the End of Education