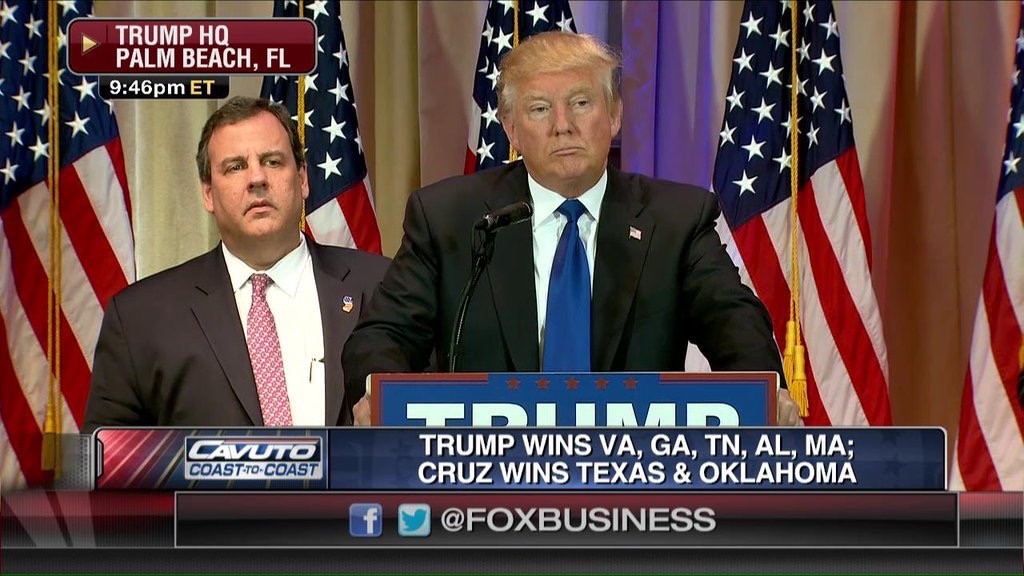 From Alabama to Massachusetts, Georgia and Tennessee, real estate and GOP front-runner Donald Trump won sweeping victories in seven of the 11 Super Tuesday states, a giant step forward towards securing the GOP nomination.

Holding a press conference instead of an election night rally in Florida, a state that heads to the polls in another two weeks, Trump told reporters he promise to bring the Republican Party together. “I’m a unifier,” Trump said at his Mar-a-Lago golf resorts in Palm Beach, Florida. “Once we get all of this finished, I am going to go after one person – Hillary Clinton… We are going to be unified party and much bigger party.”

Trump added, “Our party is expanding and all you have to do is take a look at the primary states where I won and just look at the much larger number. That hasn’t happened to the Republican Party in many, many decades. I think we are going to be more inclusive, more unified and I think we will be a much bigger party and we are going to win in November.”

He added how the special interests and lobbyists “want to have their little senator do exactly as they want” as they spend over $25 million during the next two weeks leading up to the Florida primary. “If [Rubio] win, they will have total control,” Trump said. “The [media] is declaring Rubio the big loser of tonight, and they are right, because he hasn’t won anything.”

Trump took aim at his future potential rival, Democratic front-runner Hillary Clinton, who earlier in her victory speech countered his slogan of ‘Make America Great Again,’ with ‘Make America Whole Again.’ “I watched Hillary’s speech and she talking about wages and everything is poor and badly,” Trump said, beginning his speech on the Democratic front-runner. “She’s been there for so long, if she hasn’t straightened it out by now, she is not going to straighten it out in the next four years. She wants to ‘Make America Whole Again’ and I’m trying to figure out what is that all about.”

Cruz Wins Three States, Calls for GOP to Unify Behind Him 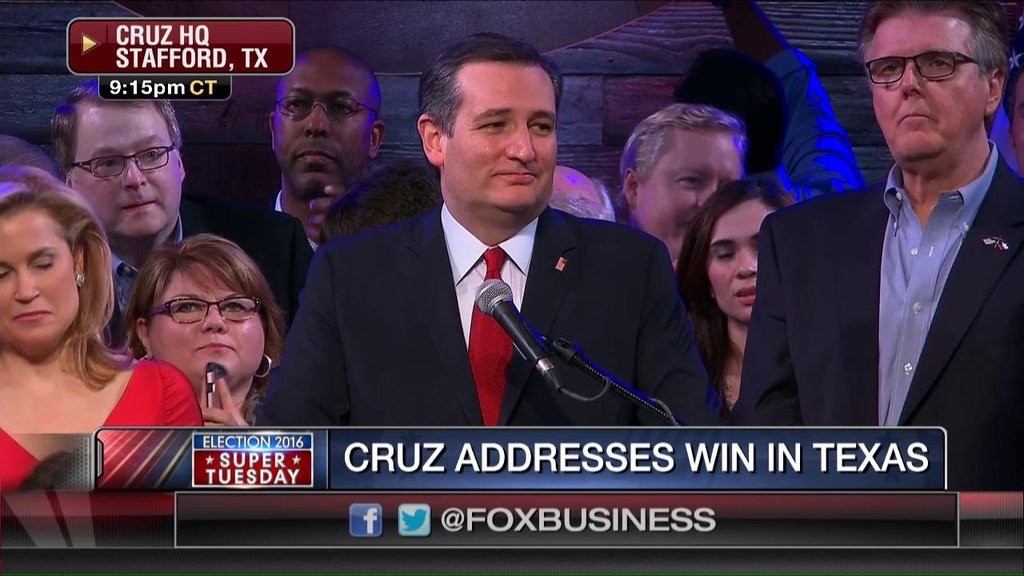 Senator Ted Cruz did exactly what he needed to do to survive – win his home state of Texas by a huge margin. He also won the neighbor state of Oklahoma along with Alaska, which allows him to continue his argument that he is the only GOP candidate that can beat Trump.

“Tonight, this campaign enters a new phase,” Cruz said in his election night speech in Texas. “Tomorrow morning we have a choice. So long as the field remains divided, Trump’s path to the nomination remains more likely and that would be a disaster for Republicans and for the nation.”

Cruz added, “We are blessed with a deep, talented, honorable field. But for the candidates who have not yet won a state, who have not racked up significant delegates, I ask you to prayerfully consider our coming together and uniting. We welcome you on our team united as one.”

Failing to win many of the Southern states he banked on previously that went overwhelming in favor of Trump, in part due to Senator Jeff Sessions endorsement, Cruz focused his speech with attacks on the front-runner. “America shouldn’t have a president who words would make you embarrassed if your children repeated them,” Cruz said. “Our president should make us all proud and who should inspire hope in all of us.”

His attacks on Trump were the same campaign stump talking points he has been pitching to voters for quite some time, calling Trump a “Washington dealmaker,” who uses “profane and vulgar.” Cruz added that Trump favors Planned Parenthood and wants to expand Obamacare into a socialized healthcare system while pointing out that Trump is “Senator Harry Reid’s and former President Jimmy Carter’s favorite Republican candidate” for being a “part of the Washington corruption for 40 years.”

On Monday, Buzz feed reported that Trump’s immigration views are “flexible” based on his off-the-record discussion with the New York Times editorial board, than what he portrays throughout his presidential campaign. However, since it was off-the-record, the evidence to support this claim is sealed unless Trump give the editorial board the permission to release the transcripts. Cruz has seized this story since it broke and called again during his speech for Trump to authorize the release of the full interview. “I call on Donald to release the tape,” Cruz said. “If you are lying to the voters, the voters have the right to know. Enough with the deception.” 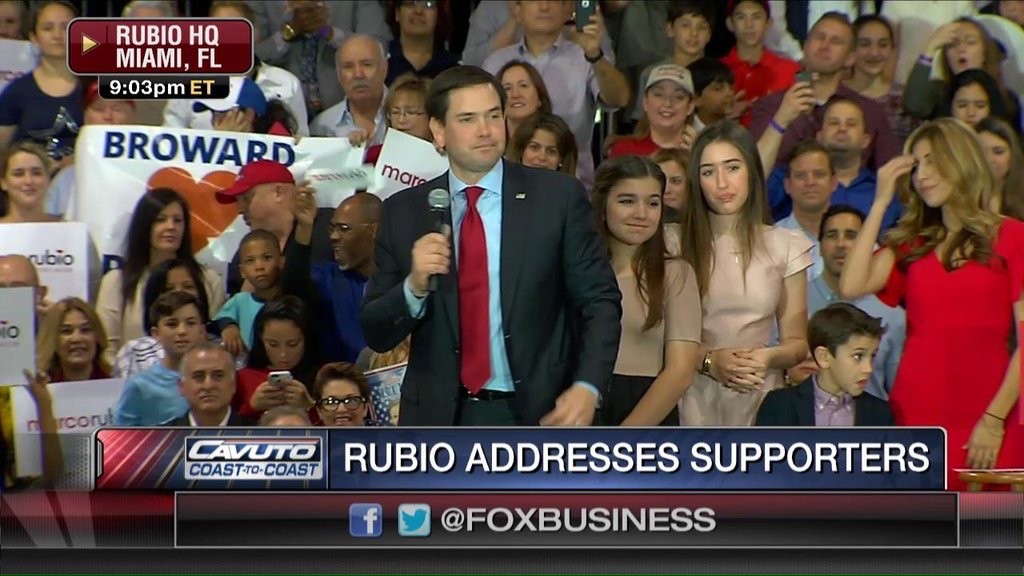 The results from Super Tuesday were not looking good for Marco Rubio as he only won one state- Minnesota and fell short in picking up delegates due to receiving less than the 20% minimum needed to earn proportional delegates in Alabama, Vermont and Texas.

Speaking in his hometown of Miami with his wife and four children by his side, Rubio stated that it’s up to Florida to shift the race to his side. “Two weeks from tonight, right here in Florida, we are going to send a message loud and clear,” Rubio said. “We are going to send a message that the party of Lincoln and Reagan and the presidency of the United States will never be held by a con artist.”

Focusing his speech on attacking Trump, Rubio continued on with his newly found criticism that he has been using on the campaign trail ever since last week GOP debate. “What’s at stake is not just the future of America, but also the future of the conservative movement,” Rubio said. “Don’t give into the fear. Do not give into the con artist who is trying to take advantage of your suffering.”

Despite his poor performance on Super Tuesday, Rubio insist he isn’t going nowhere and the battle has just begun. “I will campaign as long as it takes to ensure that I am the next president of the United States,” Rubio said.

It wasn’t until after his speech that Rubio managed to pick off one state of Minnesota as a victory. However, both Rubio and Cruz came out with the same amount of proportional delegates of 12 each, which really isn’t much of a victory.

Ben Carson: “Not Ready to Quit” 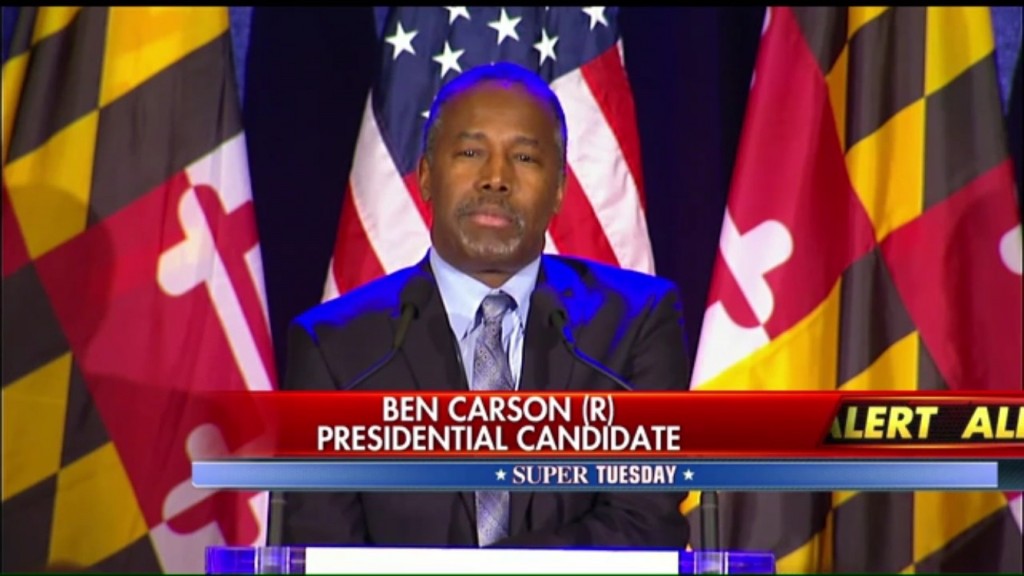 Winning no states on Super Tuesday and so far coming out with just 5 delegates, Ben Carson told supporters in Baltimore that he is “not ready to quit.”

“I am not ready to quit trying to untangle it yet,” Carson said. “I am not moved or discouraged when the political class counts me out…Millions of Americans plead with me to continue and as long as we continue to receive their support, and the Lord keeps the door open, I will remain in this presidential race.”

Finishing fifth in many states, Carson told supporters he will continue on. “We have got to be able to be strong, we cannot give up.” he said. “It’s often darkest before dawn.”

In regards to the fighting and insults going on between the top three GOP contenders, Carson issued a statement calling for more civility in this race while inviting the four other candidates to meet privately before Thursday’s GOP presidential debate in Detroit. “It is sad that we have reached a stage in our country where, because someone has a disagreement with you, they want to call you names,” Carson said. “Why sit there and talk about each other, and tear each other down when we have such important issues to deal with?”

No word yet as to the other candidates responding to Carson request. 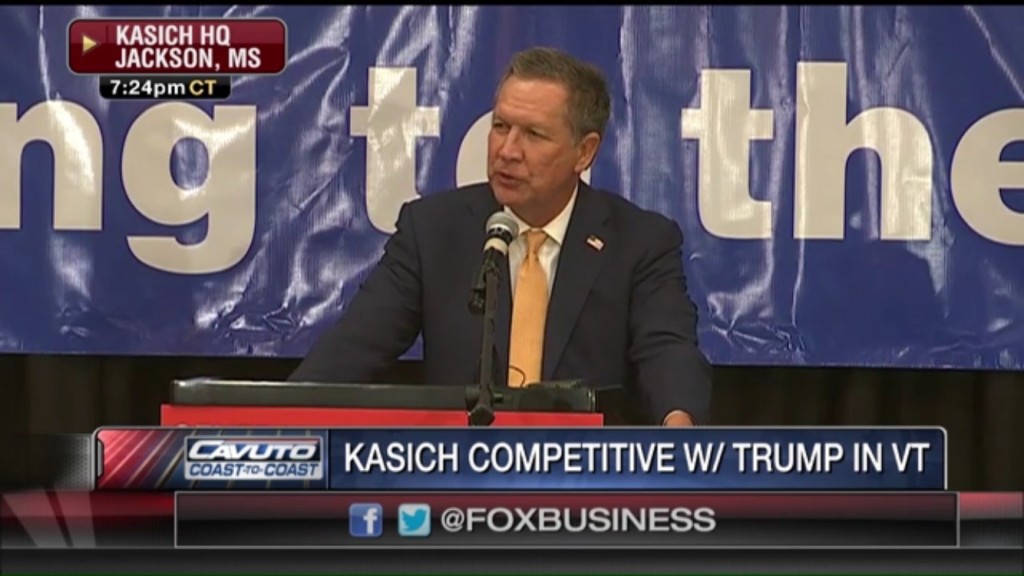 Following a second-place finish in Vermont and Massachusetts, John Kasich is looking past Super Tuesday to focus on next week race in Michigan and Mississippi and then for a sweep in Ohio on March 15.

“Tonight I can say that we have absolutely exceeded expectations,” Kasich told supporters in Mississippi. “We are almost to March Madness and you know what they all struggle for, home court advantage.”

Kasich added, “We are heading north right on to my home court with Michigan, and then, I will tell you now, we will beat Donald Trump in the state of Ohio.”

In a memo sent out to reporters, John Weaver, Kasich’s chief strategist taunted Rubio for his Super Tuesday performance and Cruz failing to win the states in the South

“Senator Rubio has been more hyped than Crystal Pepsi, but he has flopped even worse,” the memo stated. “Even a well-convinced, high-financed marketing campaign won’t work if the people don’t buy the product and that is Rubio campaign’s problem. Behind the nice packaging, voters are discovering there is little substance.”

On Cruz, the memo writes, “Ted Cruz bet it all on today, spending more than any other candidate. He needed an overwhelming delegate lead to have a shot at winning the nomination, and he fell short. The end of the road is nearing for him with the race beginning to move North, [Cruz] has no ability to grow beyond his current level of support.”

The memo points out that Kasich remains in the best position to stop Trump. “We are executing our campaign plan and Kasich is the best choice to move forward for Republicans who want to stop Trump and win the White House,” the memo concluded.

Jake Tapper to Marco Rubio: "Are You in Denial?"

Dr. Ben Carson: Not Attending GOP Debate But Not Out of Race. Yet.