As for Missouri, the race hasn’t yet been called as Trump and Cruz are both in a virtually tie with 99% reporting 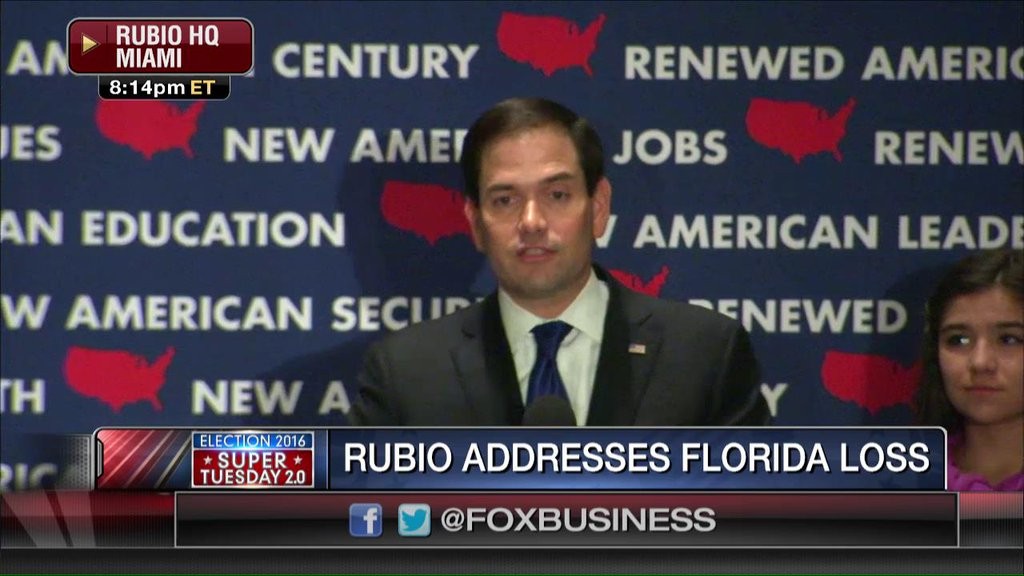 The biggest news of the night was not Donald Trump winning Florida by a YUGE margin; it was Marco Rubio walking away with dignity by suspending his campaign.

During his concession speech, Rubio told his supporters that he is ending his campaign after an embarrassing distant second-place finish in his own home state.

“While it is to God’s plan that I be president in 2016, or maybe ever, and while today my campaign is suspended, that fact that I have even come this far is evidence of how special America truly is,” Rubio told the few hundred supporters in Florida International University in Miami.

Congratulating Donald Trump on his huge victory in Florida, Rubio criticized the front-runner on the tactics of exploiting anger and anxiety instead of optimism. “America is in the middle of a real political storm, a real tsunami. And, we should have seen this coming,” Rubio said. “Look, people are angry and people are very frustrated, but that is not what’s best for America.”

In the last stand for his presidential bid, Rubio put it all on the line to win his home state’s winner-take-all primary. Once seen as the only candidate to stop Trump after his surprising third-place showing in Iowa, Rubio “Marco-Momentum” became a bust when it came time to New Hampshire. Poised to finish in a strong second-place, Rubio was heavily criticized for repeating himself multiple times in the New Hampshire debate early February that caused Rubio to ultimately finish in fifth place. Heading to South Carolina, Rubio scored dozens of high-profile endorsements, including a highly sought-after endorsement from South Carolina Governor Nikki Haley. This endorsement helped Rubio beat Cruz for second in South Carolina and Nevada.

Entering Super Tuesday with 11 states holding contested races, Rubio unleashed an all-out assault on the front-runner, attacking Trump personally from his character to his manhood. The assault backfired badly for Rubio, coming out of Super Tuesday with only one victory while failing to gain the threshold needed to earn any delegates in other states. A week later, Rubio troubles grew with his dismal performance that failed to win him any delegates that night. As the race moved to Florida, Rubio faced intense pressure to drop out as his biggest threat, Ted Cruz, became the second best option to stop Trump based on the accumulation of delegates Cruz nabbed in the past two weeks.

Florida was the last chance for Rubio to stay alive. However, every poll conducted since August had shown Rubio constantly losing to Trump by double-digits. Insisting he was going to win his home state, Rubio focused the last week solely on Florida, ignoring the other four contest primary states to make the ultimate plea to his constituents to support him once again like in 2010 to stop Trump. At the end, it failed for the young Senator.

“After tonight it is clear that while we are on the right side, this year we will not be on the winning side,” Rubio said, hinting that his presidential run wasn’t the end of his political career. I want you to know that I will continue every single day to search for ways for me to repay some of this extraordinary debt that I owe this great country.” 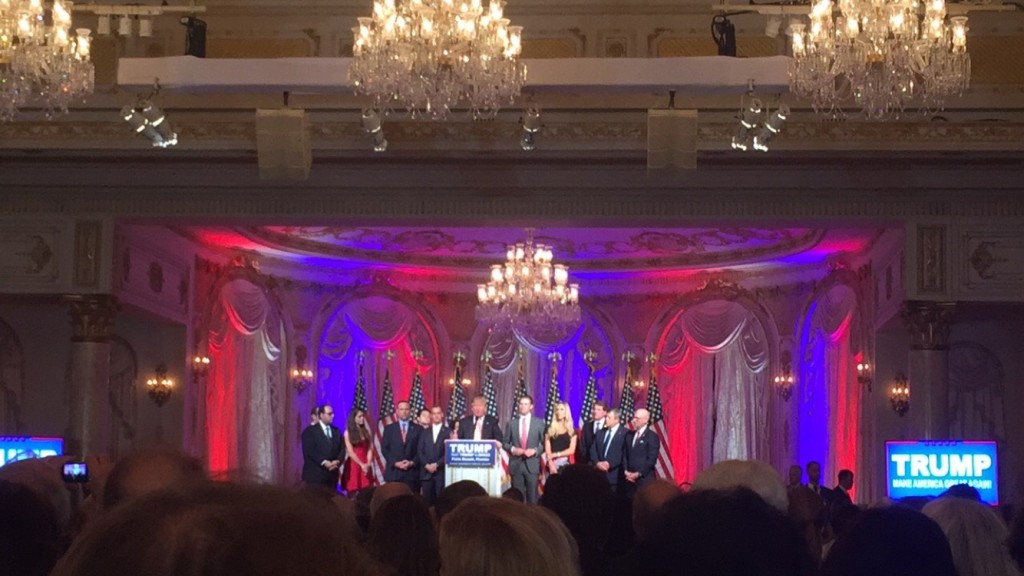 It was no surprise that Donald Trump was poised to win Florida and North Carolina but to win in Illinois, a state that broke out in protestors rioting over one of his campaign rallies over the weekend showed that it didn’t appear to tarnish the front-runner standing.

“We had a fantastic evening,” Trump told supporters who gathered in Trump’s private club, Mar-a-Lago in Palm Beach, Florida. “I would have never thought this could happen.”

With 26% reporting in Illinois, Trump was announced the winner with 40.1% of the votes with Ted Cruz in a distant second with 25.8%. Adding to his Illinois win was North Carolina and Florida, a win that led to Marco Rubio suspending his campaign from the humiliating defeat.

In Illinois, polls showed Trump facing a close race against Cruz as his rivals further criticized the front-runner on his rhetoric that led to the aftermath that ensued in Chicago and an altercation between protestors and supporters during one of his rallies.

“Nobody in ever in the history of politics received this level of negative advertising,” Trump said, telling the audience how he steers clients away from the television due to the constant false ads against him but added they do no damage when it comes to his campaign. “Mostly false, vicious, horrible that it added up to over $40 million and you explain it to me because I can’t. My numbers went up. I don’t understand it.”

Congratulating Rubio on his campaign bid, Trump praised the Florida Senator, a different tune towards his former rival whom he repeatedly mocked as “Little Marco” while slamming him for being an absentee Senator.

“I want to congratulate Marco Rubio on having run a really tough campaign,” Trump said. “He’s tough, he’s smart and he’s got a great future.”

In North Carolina, with 49% reporting, Trump was declared the winner with 40.3% of the votes to Cruz with 36.3%. However, in Ohio, in another winner-take-all match up, Trump failed to beat John Kasich, increasing the possibility that the race will prolong longer until the national convention in July. The only race that hasn’t been called is Missouri, where Trump and Cruz are virtually in a tie with 99% reporting.

Winning three out of the five races, Trump emphasized the importance of uniting the Republican Party. “The fact is we have to bring our party together,” Trump said. We have something happening that actually makes the Republican Party the biggest political story anywhere in the world. 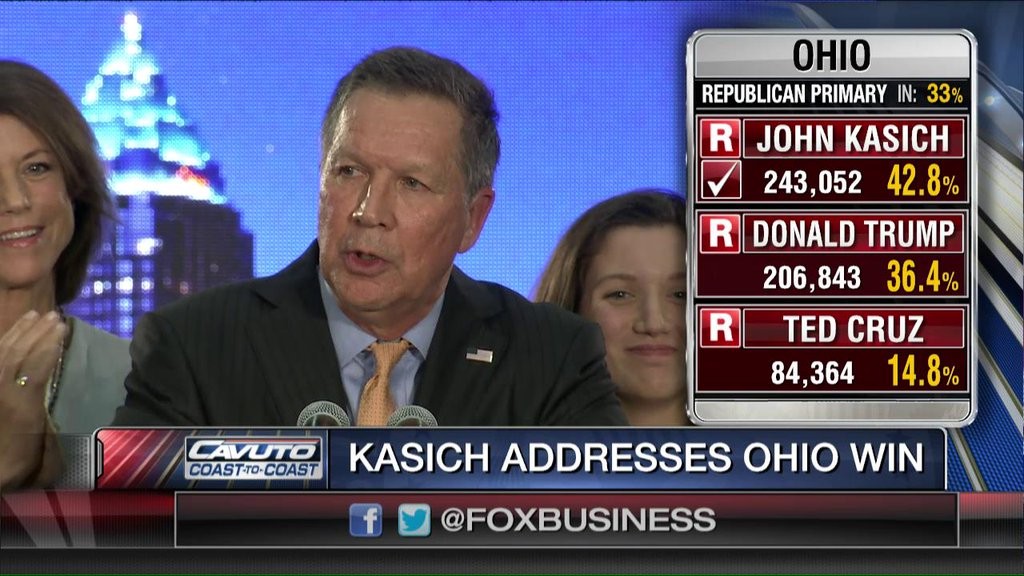 John Kasich has finally won a state, his own home state of Ohio.

“The campaign goes on,” Kasich told a boisterous crowd at his victory rally in Berea, Ohio. “We are going to go all the way to Cleveland and secure the Republican nomination.”

“There is three of us left, Kasich said moments after Rubio announced he was dropping out but paid tribute to his former rival. “I want this crowd here tonight to give a great response to a very, very great, talented and fine United States senator, Marco Rubio, for the effort that he has done.”

Thanking his home state for keeping his presidential bid alive, Kasich showered in confetti vowed to continue campaigning, traveling to Pennsylvania on Wednesday and Utah on Friday until the party’s convention. “I’m getting ready to rent a covered wagon,” Kasich said. “We’re going to have a big sail and have the wind blow us to the Rocky Mountains and over the mountains to California.”

With a win in Ohio, Kasich was awarded all 66 delegates due to it being a winner-take-all primary. As of this moment, Kasich has 142 delegates, but is way behind Trump, who now has 661 delegates while Cruz has 406. Facing a huge delegate deficiency, Kasich will now face more scrutiny to drop out. With Cruz now targeting Kasich during his election night speech and Trump hammering the Governor the past week calling him an absentee Governor who voted for NAFTA, Kasich will now have to play hardball against his two other rivals.

We shall see now with the race heading back to the West what will unfold. 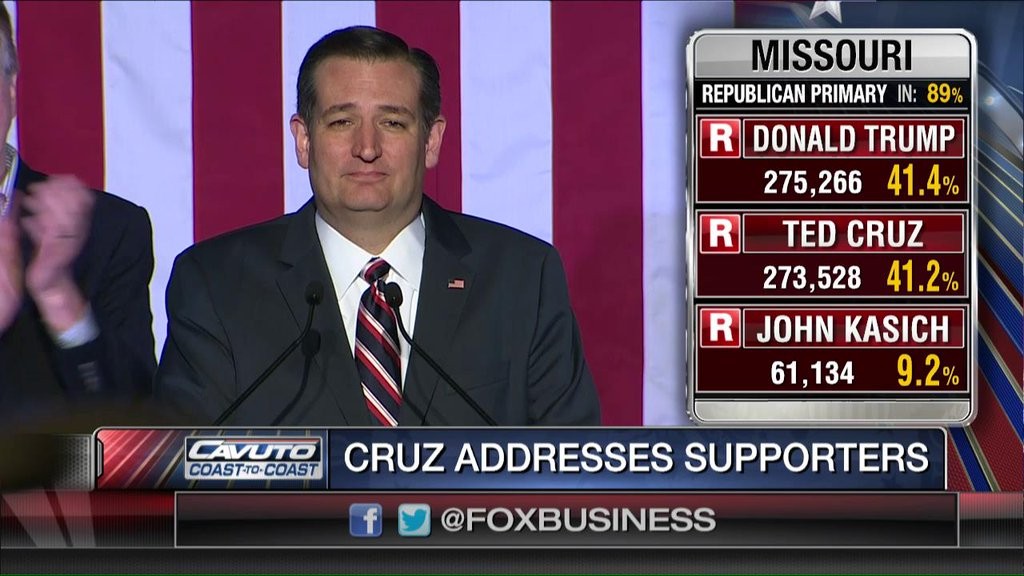 After Marco Rubio announced his exit from the GOP presidential race, Ted Cruz calls the once crowded field a two-man show between him and Donald Trump.

“Starting tomorrow morning only two campaigns have a plausible path to the nomination, ours and Donald Trump,” Cruz told supporters in Houston, Texas. “Nobody else has any mathematical possibility whatsoever, only one campaign has beaten Donald Trump over and over and over again.”

Even though Cruz didn’t win any of the five states on Tuesday, he did pick up a good number of delegates after coming second in Illinois and North Carolina, while in a virtual tie with Trump in Missouri.

During his election night speech, Cruz continued on attacking the front-runner, describing Trump as a man “who has spent decades opposing your values.” He also blamed the media for giving Trump free advertising because they want him as the Republican nominee to lose the general election against Hillary Clinton. “They know that Donald may be the one person on the face of the earth that Hillary Clinton can beat in the general election,” Cruz said. “They are partisan Democrats ready for Hillary, but the media aren’t going to decide this election, the voters are.”

Cruz also praised Marco Rubio, calling him a friend “whose passion inspires him” based on his story. “Marco’s story, his passion, inspires me,” Cruz said. “Marco can paint a picture, can weave a tapestry of the promise of America, like nobody else.” After the praised, Cruz was eager to court after Rubio supporters to join forces with his team to help stop Trump from securing the nomination.

“I congratulate Marco on the tremendous campaign,” Cruz said. “To those who supported Marco, who worked so hard, we welcome you with open arms and join us along with remarkable leaders.”