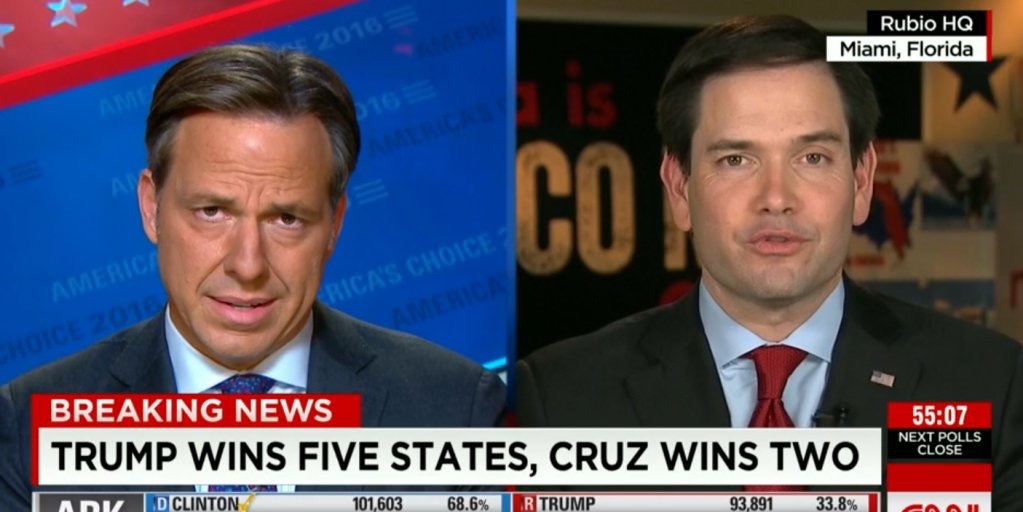 After his concession speech in Miami, Florida, Senator Marco Rubio pulled a Donald Trump and began making media rounds to every major news channel from MSNBC, to FOX News and CNN to pitch himself as the viable alternative to Trump.

On CNN, Rubio pitched again the same talking points to Jake Tapper, but this time Tapper wasn’t buying it, which lead him to ask the Florida Senator if he was in denial.

“Senator, you keep saying that, and [Trump] keeps winning states,” Tapper said during the interview. “You are talking about Virginia and that is another state that Donald Trump won.”

“I’m wondering if there’s a certain amount of denial that you are in?” Tapper asked Rubio straight up on Tuesday night.

Rubio argued that Super Tuesday wasn’t about winning or losing, but about gaining delegates. “This is about delegate count,” Rubio responded. “This is not a traditional race.”

He then turned to criticize Trump by pointing out the opposition of the front-runner still gives him a chance to become the GOP nominee and savior. “Usually in a race like this, you’d have a front-runner and people would be saying to drop out and rally around the front-runner for the sake of the party,” Rubio said. “What people are saying now is fight as hard as you can to save the party of Lincoln and Reagan from a con artist. If we name Trump as our nominee of the Republican party, it will be the end of the modern Republican party.”