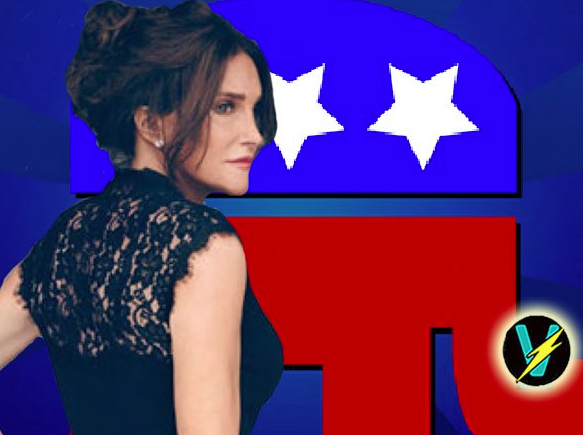 Recently I DVR’d an episode of the reality show, “I Am Cait” starring Caitlyn Jenner (formerly Bruce).  The reason I wanted to watch is because the previews showed Caitlyn defending her stance as a “conservative Republican” with a room full of feisty transgender Democrats.  I wanted to see for myself how she would handle being scrutinized for her beliefs and I wasn’t disappointed.

The episode began with Caitlyn and friends on a cross-country bus trip.  Referring to that night’s Democrat debate, Caitlyn said, “We need both sides…if we’re unfortunate enough to get Hillary as our next President, we need her on our side…Although she won’t be…she couldn’t care less about women.  She only cares about herself.”

Cue the dramatic music as eyebrows were raised and shocked looks were exchanged.  When asked which Republican candidates would help trans people Caitlyn said, “All of them.  They don’t hate gays or trans people.  They are more ‘I want a thriving economy so every trans person has a job.'”

Thus ensued the usual arguments about how Democrats are so much more compassionate and caring about all-people-in-general and how evil and hateful all Republicans are to, well, everyone.  Caitlyn shrugged, smiled, and in the end they all seemed to pity her “ignorance”–but she never backed down nor did she apologize for her beliefs.

Of course immediately after the airing of the episode the Twitter bullying began.

People, #CaitlynJenner says she is STILL voting GOP in2016. Regardless of gender identity, I guess she identifies most as “uninformed.”

I wish @Caitlyn_Jenner would realize her political views are basically self-hatred. Why would any LGBT person be Republican? #IAmCait

Pink News responded by trying to dispute her defense of the GOP:

“Despite her claims, the GOP is overwhelmingly opposed to transgender rights – with state Republican lawmakers across the US attempting to pass ‘bathroom bills’ that permit discrimination against trans women.

Hillary Clinton has repeatedly voiced her support for transgender rights, and has unveiled an extensive raft of transgender-friendly policies in her LGBT rights manifesto.”

Their arguments reminded me of some of the reasons the Republican Party has been demonized over the years and, as a result, is currently so fractured.  Our reasoning and message may be on-point but it’s the way the GOP explains their message that truly needs major PR work.

Case in point, the “Bathroom Bill”, designed to allow anyone who claims to be transgender to use whichever public bathroom they most relate to.  The trans people on ‘I Am Cait’ argued that Republicans fought against the bill, specifically in Houston, Texas, out of “fear” towards transgender people.  They claimed the GOP is against the bill simply because of blind irrationality, hatred, and ignorance.

Whether it’s transgender, immigration, abortion, marriage, or any number of issues, the Leftist argument is always the same:  The GOP hates people for no reason.  They come to this conclusion because unfortunately that’s all they hear from the media, from their politicians, and their favorite actors and television shows.  They rarely hear the other side of the story (unless it’s shouted by extremists in insulting, irrational ways).  However even more unfortunate is the reason they don’t hear from the other side is because too many within the GOP aren’t able to succinctly defend and explain their positions.

Caitlyn Jenner tried–in a very public, very hostile way and in front of millions of people–to do just that.  She tried to calmly, rationally explain that the GOP is the Party that can actually help people while Democrats do the opposite.  Her audience didn’t listen and instead showed more disgust than open minds, but at least Caitlyn made a major effort and that’s exactly what everyone in the GOP should be doing–boldly, loudly, and proudly–every day.

Following are my own personal explanations as to why the GOP opposes certain controversial sexuality-based issues.  Just like Caitlyn Jenner, we all need to be fearlessly clear in explaining our stances to the world.  Otherwise, the Left will happily explain it for us, as they’ve been doing for many decades.

BATHROOM BILL:  No, the GOP stance on the Bathroom Bill is not based on hatred or irrational fear.  We’re not afraid of transgender people, we’re afraid of predators pretending to be them and taking advantage of the innocents.  As someone who was a victim of a predator, I know firsthand that the sick monsters of the world are continually looking for cracks in the system and cracks within the family unit to inflict their pain.  Something like the Bathroom Bill opens that door wide open in ways you can’t close.  And even if only one person is stopped from being taking advantage via that bill, that’s one less victim in the world.  The pain of simply using one bathroom over another isn’t the same as the lifelong pain of being a molestation victim, and sadly too many trans people understand this clearly.

SAME SEX MARRIAGE:  Bottom line, for decades activists have fought to keep the church out of the state–so we need to ensure that the state stays out of the church.  Unfortunately at the core of the same-sex marriage issue are some activists who are out to destroy the one institution that continues to be allowed to publicly “judge” them:  Religion.  So my biggest concern with our Federal Government being able to change marriage laws is that they first needed to ensure protection of churches/clergy from litigation.  Yes, religion is supposed to be protected via the 1st Amendment but as we’ve seen over the years, when the government decides it wants to supersede the will of the people and/or the Constitution it will find a way to do so.  So while my personal belief is that marriage should be allowed for all, it is conditional that activists aren’t allowed to sue churches and/or pastors if they are refused a church wedding based on biblical principle.

PLANNED PARENTHOOD/ABORTION:  I can safely say that everyone in the GOP is perfectly fine with providing tax dollars for the healthcare options provided by Planned Parenthood.  And yet many on the Left claim the GOP ‘hates women’ and wants to harm them for calling to defund PP, mostly citing abortion due to rape, incest, and health concerns for the mother.  Fact is, 95% of abortions are done as birth control and only 1% because of rape/incest, 1% because of fetal abnormalities, and 3% due to the mother’s health problems.  So let’s say, for the sake of argument, that our Federal Government continues funding all Planned Parenthood healthcare services but ceases funding the 95% of women who are currently using abortion as birth control, only allowing abortion for the severe 1-3% cases.  Would that suffice the pro “choice” crowd?  Unfortunately, the answer is a resounding no.  The reason?  Money, and lots of it.  Planned Parenthood currently receives over $500 million in government grants per year and rakes in over $390 million in private donations.  And while they try to deny that their main purpose is abortion (of which they claim is only 3% of their business) even Left-wing site Slate.com calls this “the most meaningless abortion statistic ever.”  Not to mention Planned Parenthood abortion providers are wiping out the African-American race, which was one of the main goals of the founder of PP.  From BlackGenocide.org, “Planned Parenthood is the largest abortion provider in America. 78% of their clinics are in minority communities. Blacks make up 12% of the population, but 35% of the abortions in America. Are we being targeted? Isn’t that genocide? We are the only minority in America that is on the decline in population. If the current trend continues, by 2038 the black vote will be insignificant. Did you know that the founder of Planned Parenthood, Margaret Sanger, was a devout racist who created the Negro Project designed to sterilize unknowing black women and others she deemed as undesirables of society? The founder of Planned Parenthood said, “Colored people are like human weeds and are to be exterminated.” Is her vision being fulfilled today?”

Many within the GOP believe we should simply stop talking about social issues completely; ignore them away.  I’ve personally been told to do so on numerous occasions by high-ups within the Republican Party.  I’ve refused, but this is perhaps some lingering insanity from the old ‘Silent Majority’ days, when we thought being silent was actually a good thing.  The danger in that old-school silence is that a new generation of people have no idea who ‘we’ are and what the original core of the GOP is all about, other than what they’re told by the media or what they’re yelled at by extremists.  If we don’t learn to clearly define our individual positions on all the issues that matter–as Caitlyn Jenner is trying to do–no matter who wins the presidential election we are absolutely sunk as a Party forever.