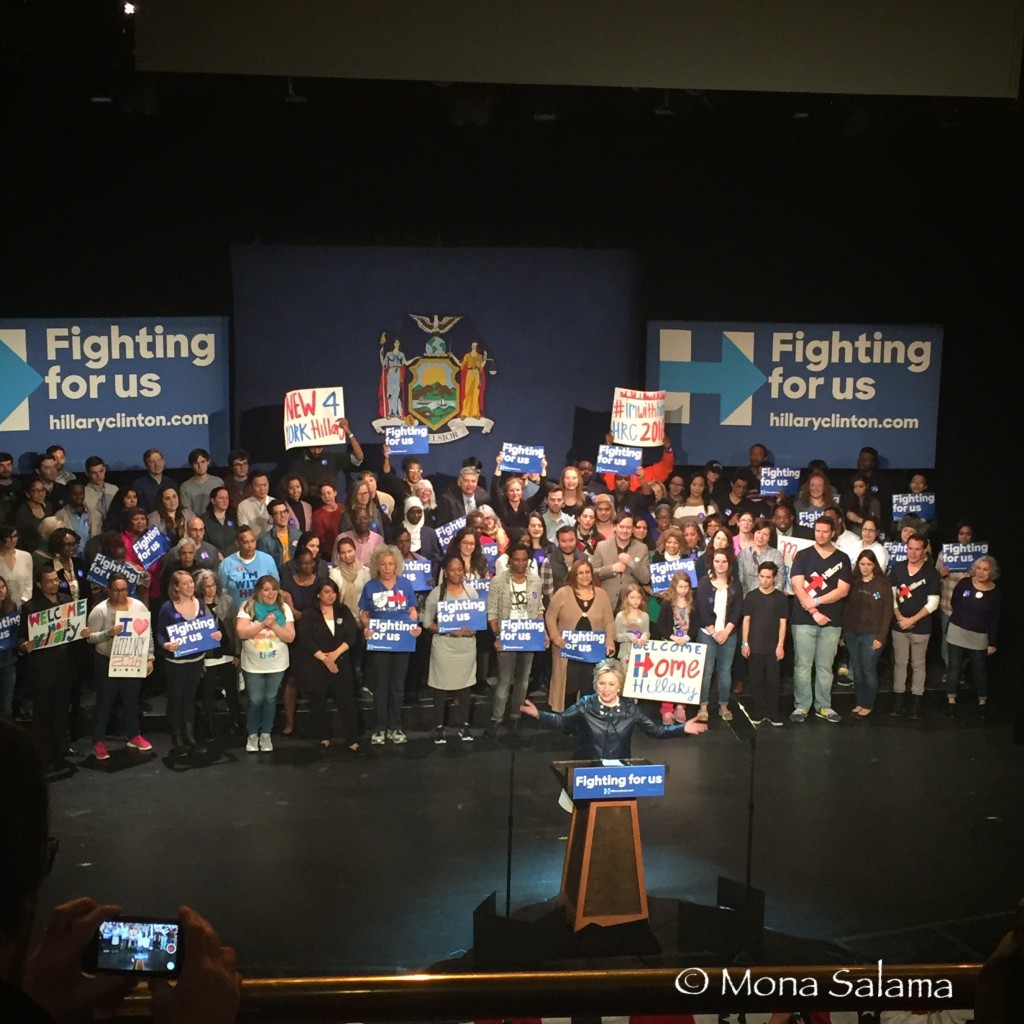 Harlem, NY. – Just weeks ahead of the New York primary, Democratic presidential front-runner Hillary Clinton returned to her adopted home state, where she once represented in the Senate for eight years, to ask New Yorkers to back her once again in the upcoming New York primary.

“You have always had my back and I have always tried to have yours,” Hillary said. “When I think back to those eight eventful years that I served you, there were some hard times, weren’t there? But we pulled together.”

With 297 delegates up for grabs in New York with its primary on April 19, Hillary is trying to prevent her rival, Senator Bernie Sanders, from narrowing the gap in the race for delegates. Even though Hillary remains in the lead with 1,267 pledged delegates to 1,037 for Sanders, the surging Brooklynite Democratic Socialist has tightened the race this month after sweeping victory in five of the six contests. It’s show time in New York, where voters will play a pivotal role in deciding who they want to put away an opponent or help narrow the gap for the nomination.

As Hillary plans to campaign in New York the next three days, it looks like that she has conceded in Wisconsin and is focusing on a state holding the second largest delegate count. The latest polls in Wisconsin, which holds its primary in six days shows Sanders now with a small edge over Hillary. A victory for Sanders in Wisconsin will give him the momentum he needs in New York and the inroads to embarrass Hillary in his home state.

Coined as a homecoming rally, Hillary kicked-off her New York campaign with a rally at the famous Apollo Theater in Harlem. With hundreds of supporters chanting, “I’m with her” and “I believe that she will win” while delivering a half –hour speech outlining her case against Sanders whom she called “my opponent” while attacking Republican front-runner Donald Trump.

“I don’t have to tell you this is a wild election year,” Hillary said, promising to crisscross the state like she once did when she ran for the U.S. Senate seat in New York. “We are going to work for every vote in every part of this state, just like I did when I ran for Senate because New Yorkers took a chance on me, and I will never forget that.”

On her rival Sanders, Hillary criticized her opponent as a single-issue candidate, arguing his proposals wouldn’t get passed. “My opponent and I share many of the same goals,” Hillary stated. “But some of his ideas for how to get there won’t pass and others just won’t work because the numbers just don’t add up. My opponent says, well, we are just not thinking big enough. Well, this is New York. Nobody dreams bigger than we do.”

Hillary added, “I take a backseat to no one when it comes to taking on income inequality. But it’s also important to take on racial inequality and discrimination and to stand up to the gun lobby and fight for common-sense gun safety.”

When mentioning the Republican contenders, Donald Trump and Ted Cruz, the crowd led a raucous boo. “On the Republican side, what we’re hearing is truly scary,” Hillary said. “When Donald Trump talks casually about using torture and allowing more countries to get nuclear weapons or Ted Cruz calls for treating American Muslims like criminals and racially profiling predominantly Muslim neighborhoods, that doesn’t make them sound strong. It makes them sound in over their heads. You know, loose cannons tend to misfire, and in a dangerous world that’s not a gamble we can afford.”

Focusing most of her speech on unleashing scathing attack against the Republican front-runner, Hillary criticized the fellow New Yorker for running a divisive campaign. “He wants to round up millions of Latino immigrants and kick them out of the United States. He wants to ban all Muslims from entering America, Hillary said. “It’s cynical, and it’s wrong. It goes against everything New York and America stands for.”

The crowd cheered and broke into chants of “Deal me in! Deal me in!”

“We’re going to stand up for the values that make New York and make America great,” Hillary said. “Don’t ever forget. This is the greatest country on earth, and we’re going to fight for it.”

She concluded her remarks by predicting a victory in the Empire State, the Democratic nomination and the general election.

“With your help, we’re going to win the primary here on April 19, and then we’re gonna win the Democratic nomination and the election in November.”

Wisconsin #GOPTownHall: Candidates Backing Away From the Pledge

If Sanders Wins NY Democratic Primary, Some Superdelegates Vow to Back Hillary Anyway