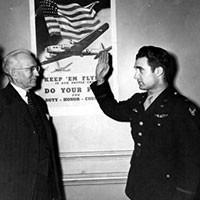 With all the attention and animosity focused (rightly) on the prevalence of illegal immigration in this county, it’s important to remember the honest people who came to the United States from abroad. These are the people who did it right; they’re the ones who longed to travel to and become a part of the greatest nation on Earth, and they are the ones who at the same time respected that nation enough to follow its laws and work within its system for allowing them entry. They are the legal immigrants.

America was built by immigrants, and to this day, it remains a place to which people around the world wish to go. And one (probably the best) traditional way that immigrants serious about joining the United States the right way have used to prove their loyalty is by serving in our military. That is to say, they volunteer to offer up years of their lives protecting us, ultimately putting their own lives on the line when necessary to safeguard their adopted home. Once they have done this, as is the case with natural-born Americans who serve, there is little room left to question their devotion and integrity. We even offer incentives to legal immigrants who choose to join the military, such as an expedited path to citizenship (a good thing when offered to people who came here the right way) and opportunities to get an education that will help them in their civilian careers after service. In return, the armed forces get to recruit people who offer them widened cultural diversity, enabling them to understand their friends and know their enemies better. Immigrant recruits are also statistically more likely to see through their enlistments than those born in America, who have a greater tendency to leave early. It’s win-win for both sides.

I think that’s why it angered me so much when I was watching the most recent Democratic debate, and had to see Hillary Clinton – a criminal – and Bernie Sanders – a socialist – talk about how they would never deport children and non-criminals from the United States even if they were here illegally. In other words, people who never bothered with taking the proper steps to get into this country the right way are to be welcomed to stay just because they made it in under the radar. They are to be rewarded for breaking the law, and if these two have their way, offered a path to citizenship that would validate their illegal behavior. This is the Clinton/Sanders vision for America; no borders, no enforcement, no nation.

Am I the only one who sees the injustice here? I’m not even talking about the sanctity of our laws anymore, but about simple fairness. Letting people break the rules to get in to our country is a vile insult to the legal immigrants who followed the law, worked hard, and risked their lives to become Americans. And some of them, let’s not forget, even gave their lives: They died in the military, serving our country before even getting the chance to finish earning their citizenship. By contrast, illegals did nothing but have themselves (or their children) smuggled in. And Democrats want to reward this behavior?

Honoring our military is one of our most important duties as Americans, because without them and the safety their selflessly provide for us, we truly have nothing. It is unAmerican, unconscionable, and unacceptable to insult people who offered military service – the greatest gift they could give us – as a way of proving their worth and their loyalty to be legitimately accepted into this nation. Those people understand that freedom isn’t free, and that being counted as an American takes hard work and sacrifice. Letting those who refused to make this sacrifice enjoy the same rewards as those who did is an affront to an important sector of our population, heroes without which this country never would have been built: Legal immigrants.

Daniel Greenfield: How US Taxpayers Funded the Murder of an Iraq Vet in Israel

Presidential Candidates and the IRS