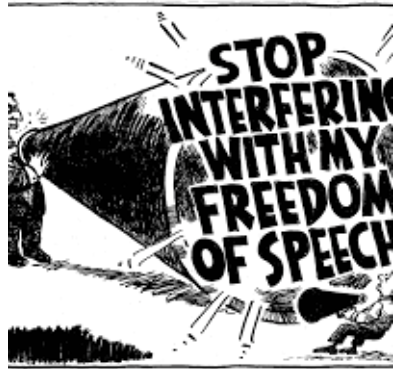 There’s a clear and present danger to free speech in this country, and that means something. Free speech is probably our most cherished American value – the right (not privilege) to say what is on your mind without fear of any repercussion beyond a spirited debate with those who disagree, certainly not a malevolent entity silencing you by force. A lot of brave people have fought very hard and even given their lives to win and preserve this precious freedom, and we honor their sacrifice and remember every moment of every day the incalculable value of what we have.

Groups like moveon.org are a direct threat to this freedom, as proven by their behavior. They select political ideologies and values that they happen to find objectionable, and rather than merely exercise their own right to speak out against them, they employ social engineering techniques to make those views downright dangerous to hold. Their favorite target is people who worry about the security of the United States and the need to have a strong, impregnable border. Moveon.org disagrees, which is their right, but they take it a step further by labeling anyone who subscribes to this forbidden opinion a “racist”. They and people like them then go about posting propaganda and making public statements denouncing these views as evil and unallowable, and they convince whole demographic sectors of the population that they must be squelched. Put simply, they make people angry – so angry that they are willing to do terrible things.

We only have to look at the protests we’ve been seeing in this primary season, many of which have erupted into violence. Political events have been canceled entirely because the threat of a violent outcome was present. This is not America. This is not a place where people can speak freely and compare their ideas with those of others. This is not freedom of speech.

Of course, moveon.org shouldn’t be exclusively singled out. The sad truth is, a lot of people are out there “race baiting”, indirectly encouraging people to do violence by making them angry. You can disagree with someone all you like and you can state your own views publicly, but when you label someone un-American, when you imply that it is not morally permissible for them to believe as they do and lead others to the conclusion that they must be stopped, then it is you who is behaving in a manner inconsistent with the principles of this nation.

The net result of this is more than just a few isolated incidents of violence, as bad as that is. It has a chilling effect on our very republic. Powerful people are directing this action, deciding what is okay and what is not okay to say in public. Simultaneously, they use their vast wealth to buy politicians with exorbitant campaign contributions and install those people as their favored leaders. Effectively, the American public has little or no choice in the way elections really turn out and the ones who really come to power. It’s disturbingly similar to the rigged ballots of third world countries that make a mockery of democracy and hold “elections” for appearances alone, knowing full well who the winner is going to be. The dictators of those countries enjoy announcing “results” that report 100% of votes cast went to the supreme leader.

We have become distressingly complacent in this country, even about the things that make it the greatest country in the world. When we allow ourselves to be content to lose out most precious American freedoms, then although we may live in a country called the United States of America, we will no longer truly be Americans.

Senior GOP Official: "We Choose the Nominee, Not the Voters"