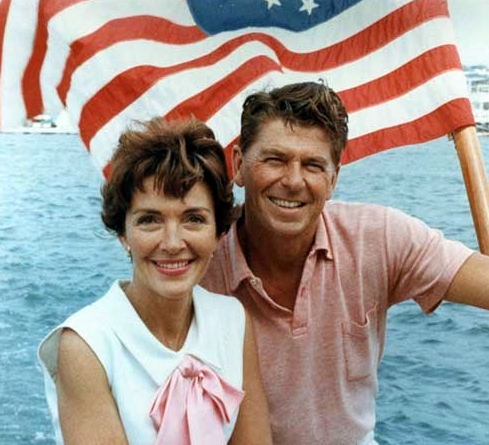 Nancy Reagan, the widow of President Ronald Reagan and passionately devoted keeper of his flame, died Sunday morning of congestive heart failure at 94, according to her spokesperson.

Reagan died at her home in Los Angeles. She’s set to be buried at the Ronald Reagan Presidential Library in Simi Valley, California, next to her husband. Prior to the funeral, there will be an opportunity for members of the public to pay their respects at the Library, the spokesperson said. Details had not yet been announced Sunday afternoon.
Reagan, whose husband died in 2004, had appeared frail after suffering several falls in recent years. In May 2012 it was disclosed she had broken several ribs in a fall at her Los Angeles home six weeks earlier.

“Nancy is where she has always wanted to be with her Ronnie…Now she is at peace…,” her stepson, Michael, wrote on Twitter.

Los Angeles – Mrs. Reagan will be buried at the Ronald Reagan Presidential Library in Simi Valley, California, next to her husband, Ronald Wilson Reagan, who died on June 5, 2004. Prior to the funeral service, there will be an opportunity for members of the public to pay their respects at the Library. Details will be announced shortly.

In lieu of flowers, Mrs. Reagan requested that contributions be made to the Ronald Reagan Presidential Library and Foundation at www.reaganlibrary.com.

For continuous information on the week’s events, please visit the Reagan Library’s web site at www.reaganlibrary.com.

A Farewell to Nancy Reagan