In the wake of the ISIS massacre in Brussels, the New York Post reported this phenomenon:

An outpouring of solidarity – and defiance – flooded social media Tuesday following the deadly terror attacks in Brussels that left at least 31 people dead.  The most widely shared image was a cartoon of a French flag comforting a crying Belgian flag with the words “13 novembre… 22 mars…” written underneath.

Absolutely devastating. Nothing screams DEFIANCE! like weeping, effeminate androgynous flags. One can only imagine the quivering fear and pant-wetting the image instills among terrorists worldwide.

In another time, another era, Europe would have responded differently. In 1095, Europe responded to four centuries of Islamic imperialism with the Crusades. In 1492, the Spanish Reconquista ended centuries of Islamic occupation. In 1694, the Holy Roman Empire crushed the Ottoman invasion. For centuries thereafter, European nations extended their military power across the entire world. 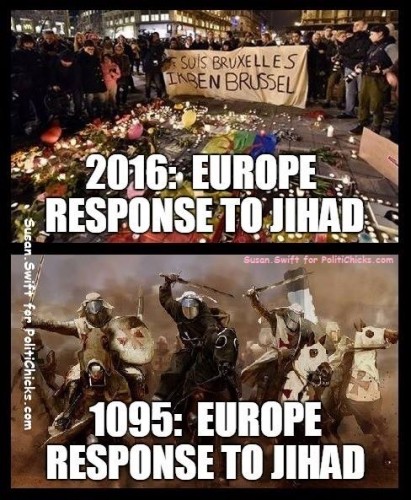 But now, in the 21st Century, nothing of that old Europe remains.  21st Century Europe is a feeble, dying, embalmed caricature.  ISIS bombs European capitals seemingly at will.  Once upon a time, violent forays into European capitals would have been met with a shockingly violent response. Today’s Europe responds with Tweets and sobbing flags.  We hold hands, light candles, carry flowers, and tweet out #PrayForTheWorld.  The contrast between 21st Century Europe and its predecessor Europe is simultaneously shocking and depressing.

Enough with candlelight memorials and flowers. Candles and flowers are for the dead. Start protecting the living. I promise you, it will require more than hashtags.