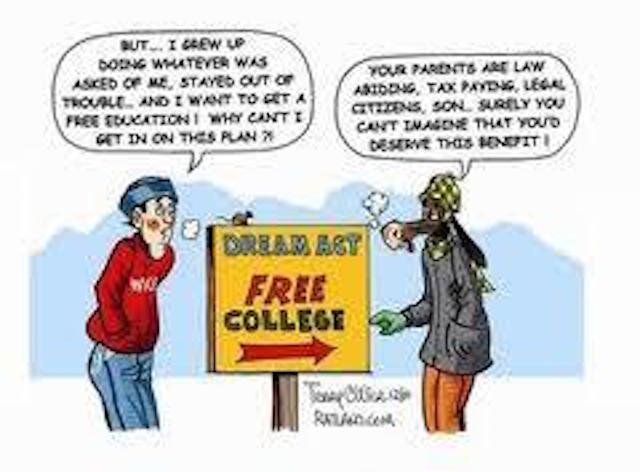 The next generation of Student Loan Slaves is about to be born.  Across the country, high school seniors have applied to colleges, and now breathlessly await the news of “acceptance”, the confirmation that they are indeed worthy to attain the coveted rank of Education Slave.

For most applicants, the “reward” is twenty plus years of indentured servitude.  Many students will borrow crushing amounts of debt to obtain a four year degree:

According to the College Board, the average cost of tuition and fees for the 2014–2015 school year was $31,231 at private colleges, $9,139 for state residents at public colleges, and $22,958 for out-of-state residents attending public universities.

Those figures are for ONE school year.  Multiply by four or five to understand the cost of a college degree.  And that’s just the average.

Like arranged marriages in third world countries, “going to college” is no longer a choice – it’s an expected way of life.

Few stop to ask WHY college costs so much.  Part of the answer is simply that they can charge what they wish.  Governmental subsides have prevented market forces from influencing the college cost equation.  The very notion that ALL students should go to college further complicates the matter.  Once college is no longer a privilege of hard work and personal sacrifice but rather a mandated federal program, then it is not “fair” that some students cannot afford the required program.

And the bureaucratic mechanism is already in place to facilitate a complete federal funding takeover of education.  When Obama mandated that all Americans buy health care, he also used the ObamaCare health legislation to ensure that college aid loans would flow through the federal government.

The President and his Democrats’ veto-proof Congress in 2010 passed the “Patient Protection and Affordable Care Act,” commonly referred to as Obamacare.
Besides adding 20 new direct tax increases that rack up $50 billion-plus in revenue each year, Congress indirectly taxes students by having Obamacare siphon-off about 69 percent of student loan profits, or about $8.7 billion a year.
That subsidy not only means that student loan interest rates will be higher after students graduate, but they will accrue at a higher rate while students are still in school.

It’s all part of Big Education increasingly funded by Big Government.  Obama recently proposed making “two years of college as free and universal as high school.”  At the DNC debates, Hillary doubled down on “tuition-free college.” Obama wants all students go to college and Hillary promises that “the rich” will pay for it.

We are training generations of young people to borrow or to turn to the government to pay for something they cannot afford themselves.  By continuing to fuel the Big Education Bubble, we are fitting the shackles of debt around the ankles of our own children, teaching them to postpone the hard work of wealth building in favor of non-work and ever longer education and higher debt.  Student loan slavery is big business for Big Government, turning all colors and creeds of young Americans into Education Slaves.

The universities’ admissions committees must be laughing their large collective posteriors all the way to the government bank.