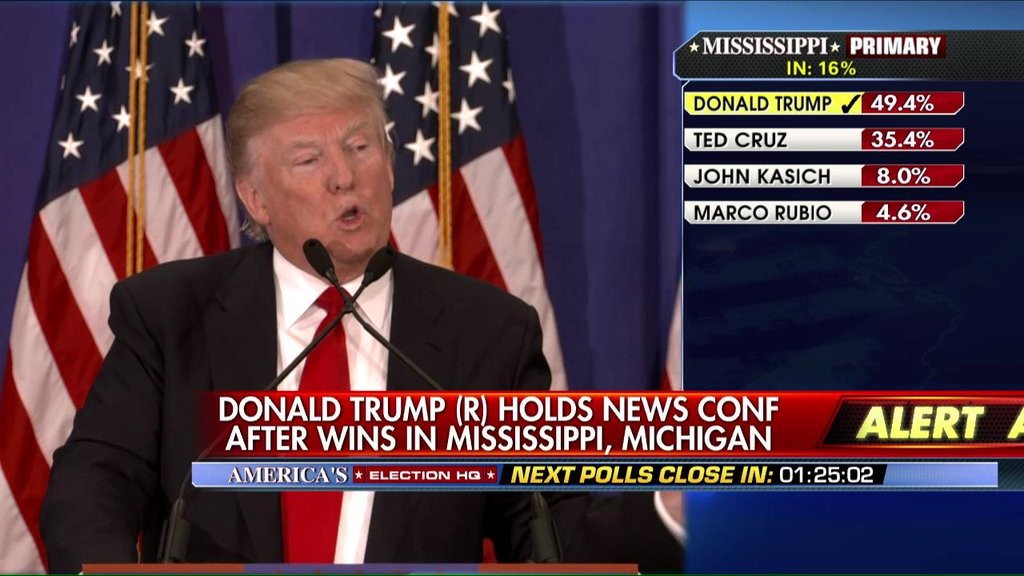 Donald Trump continues with his winning streak, gaining another pair of primary victories in Michigan and Mississippi on Tuesday night.

“We started off with 17. We are down to four and of the four they are pretty much all gone, pretty much. They didn’t do so well tonight. I’m not going to say anybody didn’t do well,” the GOP front-runner told supporters and reporters who gathered in Trump National Golf Club in Jupiter, Florida for his press conference. “There is only one person who did well tonight– Donald Trump”

Losing last Saturday in Kansas and Maine to Cruz, Trump needed a strong win tonight to remove people doubts of his candidacy after Mitt Romney criticism last Thursday, the bombardment of negative ads, and his sudden cancellation at the annual Conservative Political Action Conference. However, carrying the Deep South of Mississippi and the upper Midwest of Michigan, Trump has demonstrated his appeal amongst primary voters that can prove the withering criticism and attacks aren’t enough to stop the Trump train.

“I don’t think I have ever had so many horrible, horrible things said about me in one week, $38 million worth of horrible lies, but that’s OK,” Trump said, sounding very presidential. “It shows you how brilliant the public is, because they knew they were lies.”

Trump added, “I want to thank the special interests and the lobbyists, because they obviously did something to drive these numbers.”

The mentioning of Mitt Romney came up as topic where Trump shrugged off the relentless attacks and the criticism from the former 2012 GOP presidential nominee. Days after Romney press conference that was given before the GOP debate held in Michigan on Thursday, Trump returned fire, calling Romney a “failed candidate,” who “begged for his endorsement.”

“Mitt Romney got up and made a speech the other day,” Trump said as the audience booed. “No, no. He is a very nice man. Look, it’s hard when you go through this and then you get to the final gate and don’t get over it. It’s a hard thing so I understand.”

During the time Trump was holding his presser, both Ohio Governor John Kasich and Senator Ted Cruz were in a tight battle for second place in Michigan, the only state tonight with the biggest prize of delegates. In Mississippi, Cruz came in a distant second to Trump with Kasich far behind in third place. In Michigan, Trump is projected to pick up 25 delegates based on his percentage of the statewide vote. Both Cruz and Kasich will get 17 delegates each.

As for Marco Rubio, who won the Puerto Rico primary on Sunday with a huge margin that awarded him all 23 delegates, he fell short tonight, finishing fourth in Michigan and Mississippi. His disappointing finishing in both states, failing to crack double digits to win any delegates in both states, calls into question on how much longer Rubio will be able to stay in the race, especially if he loses Florida next Tuesday.

“Well I have no message to Marco,” Trump said. “I think it’s been a tough night for him. He is going to have to make his own decision. He became hostile about two weeks and it didn’t work. Hostility works for some people. It doesn’t work for everybody.”

Trump’s rivals are fighting to pick up some delegates tonight, as means to halt his chances of picking up the nomination quicker than possible. With last week Super Tuesday that had 595 delegates up for grabs with Trump grabbing 319 of it, this Tuesday saw a much smaller stake. However, with only 150 delegates for the taking, it was much more of a test for Trump to prove that the tactics being imposed by the political forces to stop his momentum isn’t working.

“I hope Republicans will embrace it,” Trump said. “We have Democrats coming over, we have independents coming over, and they haven’t done that ever, probably ever.”

Trump went on to add, “We have something going that is so good, we should grab everybody and unify the party.”

Exit polls interview in Michigan showed Trump finishing third behind Kasich and Cruz, and second behind Cruz in Mississippi. Winning both sets him up to compete against the Democratic nominee in a general election. When asked by reporters if he can beat Hillary Clinton, the apparent Democratic nominee in a general election, Trump said he is ready and hasn’t even focused his attention to her just yet.

“Hillary is going to be very easy to beat,” Trump answered. “If I get to go against Hillary, polls are showing that I beat her, and some of the polls have me beating her very easily. We will take many people away from the Democrats and many people away that normally go Democrat as independents.”

The best part of Trump speech was an endorsement that really came out of right field. Former Yankee player, Paul O’Neill was in attendance at Trump National Golf Club as the front-runner was giving his victory speech/press conference. Midway through his speech, Trump spotted the former right fielder, which asked if he was “originally come from Ohio.” O’Neill nodded, in which Trump later asked if endorse his candidacy. “I’m here,” O’Neill replied with a smile.

“I love you, Paul,” Trump said. “That’s a great endorsement.”

Uncle of Benghazi Victim Says, "I Lost Respect for Romney in 2012 Debate"