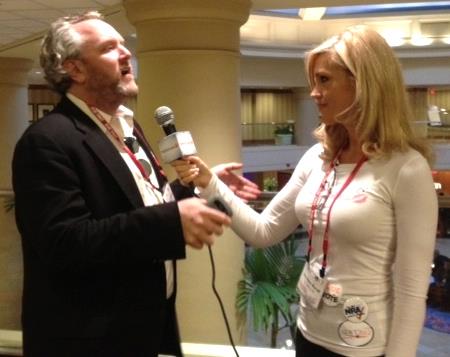 (Author’s note:  On the morning of March 1, 2012, my husband and I embarked on our only vacation of many years to beautiful Turks and Caicos.  As soon as I opened my laptop I had at least 100 messages and knew something was terribly wrong.  Andrew Breitbart had died.  What follows is the article I wrote on March 2, 2012.)

So I’m on vacation.  Turks and Caicos, one of the most beautiful islands on earth.  I’m here, away from the cesspool that is Los Angeles, California, and yet still trying to keep up with my social network world.

Logging onto the Internet I learn that Andrew Breitbart is dead and I know no other words to describe this than to say I am devastated.

All day I’m looking at shades of aqua and blinding white sand but all I know is that Andrew Breitbart is dead and the world is not as good as it was a day ago.

It feels like one of our Generals in this war against the mainstream media has died.

Andrew Breitbart is one of the reasons I write articles and work on a show like PolitiChicks.  He coined the term “Citizen Journalist” to describe this new type of work—which basically necessitates going out into our now crazy America and trying to find truth among the garbage that the mainstream media has forced upon us.

Andrew Breitbart showed us that the liberal Monster Machine we’re so afraid of is simply a giant balloon—all filled with hot air and bluster and blunder and lies—and that all we have to do is take tiny little pin and poke it to make it all go away.

Andrew Breitbart never avoided confrontation—he sought it out.   He would walk into groups of angry liberal mobs and he would talk to them.  He talked to them.  He would ask protesting union workers simple questions like, “Why are you here?” and “Who paid for your trip?” and they wouldn’t know what to say.   He proved over and over that all these monsters were made of smoke and mirrors.

Andrew Breitbart paved the way for every one of us to be Citizen Journalists.   He made sure that all of us regular Conservatives Americans felt competent enough to fight the force that is the mainstream media.  He wrote his book Righteous Indignation to remind us that we each needed to feel confident enough to speak out when we saw something wrong.   He encouraged us to blog and write articles and make videos when we knew something wasn’t being told correctly.  He told every one of us to stand strong when we knew we were being treated badly in a ‘politically correct’ world where our values and principles were taking a back seat to the liberal agenda.

Andrew Breitbart taught me that I could say and do whatever I needed–as long as I was correct in what I was reporting.  If I knew in my heart and mind I was doing the right thing it would only take my God to make me stop.

I will never stop.

I will never be silenced.

I will not allow the mainstream media to be the only voice in America.

Andrew Breitbart said we have to create a ‘new dialogue’ in the media.

We will continue what he started; I know I will and I hope and pray you will, too.

Rest in peace, Warrior Breitbart.   Our war has only started; I am prepared to die for what I believe in.  God bless you, my friend.

My interview with Andrew, one of his last:

The Betrayal of the Right’s Grassroots by their System