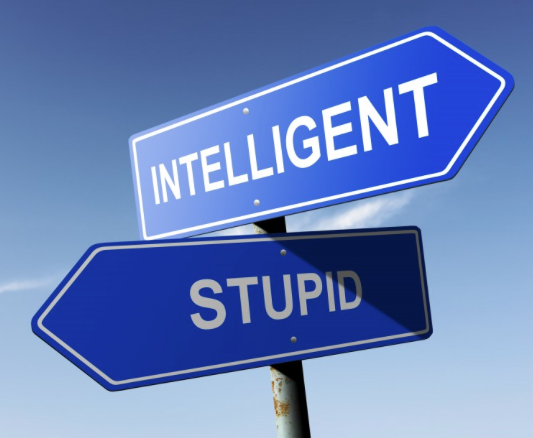 The infrastructure of manufactured intelligence has become a truly impressive thing. Today as never before there is an industry dedicated, not to educating people, but to making them feel smart. From paradigm shifting TED talks by thought leaders and documentaries by change agents that promise to transform your view of the world, manufactured intelligence has become its own culture.

We all know that George W. Bush was a moron. And we all know that Obama is a genius. We have been told by Valerie Jarrett, by his media lapdogs and even by the great man himself that he is just too smart to do his job. And it’s reasonable that a genius would be bored by the tedious tasks involved in running the most powerful nation on earth.

But what is “smart” anyway? What makes Obama a genius? It’s not his IQ. It’s probably not his grades or we would have seen them already. It’s that like so many of the thought leaders and TED talkers, he makes his supporters feel smart. The perception of intelligence is really a reflection.

Smart once used to be an unreachable quality. Einstein was proclaimed a genius, because it was said that no one understood his theories. Those were undemocratic times when it was assumed that the eggheads playing with the atom had to be a lot smarter than us or we were in big trouble.

Intelligence has since been democratized. Smart has been redistributed. Anyone can get an A for effort. And the impulse of manufactured intelligence is not smart people, but people who make us feel smart.

Intelligence to a modern liberal isn’t depth, it’s appearance. It isn’t even an intellectual quality, but a spiritual quality. Compassionate people who care about others are always “smarter”, no matter how stupid they might be, because they care about the world around them.

The thought never rises within this bubble of manufactured intelligence that all of them might really be idiots who have convinced themselves that they are geniuses because they read the right books (or pretend to read them), watch the right movies and shows (or pretend to) and have the right values (or pretend to).

Manufactured intelligence is a consensus, not a debate. It’s not arrived at through a process, but flopped into like a warm soothing bath of nothingness. It’s correct because everyone says so. Real intelligence is the product of constant debate. It is not easy or simple. It is a collision, not a consensus.

Liberal intelligence is largely concerned with the latter. It is a self-esteem project for mediocre elites.

Perpetual self-involvement isn’t intelligence regardless of how many of the linguistic tricks of memoir fiction it borrows to endow its liberal self-help section with the appearance of nobility.

Liberalism isn’t really about making the world a better place. It’s about reassuring the elites that they are good people for wanting to rule over it.

That is why Obama received the Nobel Peace Prize for having good intentions. His actual foreign policy mattered less than the appearance of a new transformative foreign policy based on speeches. Gore promised to be be harsher on Saddam than Bush, but no one remembers that because everyone in the bubble knows that the Iraq War was stupid… and only conservatives do stupid things.

Liberal intelligence exists on the illusion of its self-worth. The magical thinking that guides it in every other area from economics to diplomacy also convinces it that if it believes it is smart, that it will be. The impenetrable liberal consensus in every area is based on this delusion of intelligence. Every policy is right because it’s smart and it’s smart because it’s progressive and it’s progressive because smart progressives say that it is.

Progressives manufacture the consensus of their own intelligence and insist that it proves them right.

VIDEO: Who Is Hillary Clinton?