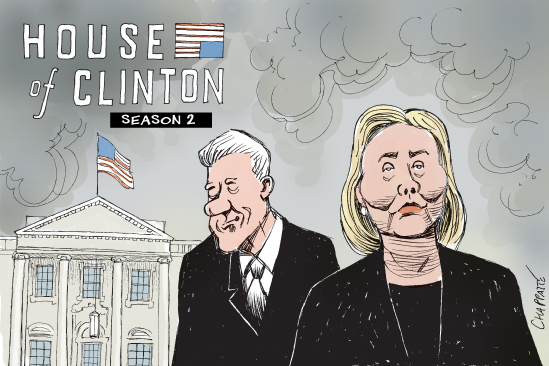 The phrase “Only a Clinton” entered our lexicon in the nineties. Ever since then the unsinkable Clintons have continued spewing outrageous lies and ridiculous ploys that only a Clinton could get away with.

Hillary Clinton tried campaigning for the White House without actually taking positions on anything. Iran was a particularly touchy subject because the Democratic Party has two constituencies that are sharply divided on the issue. Jewish voters oppose the deal while left-wing voters back it.

Hillary Clinton couldn’t pander to both at the same time. Or could she?

Hillary Clinton endorsed the deal while in true “Only a Clinton” style running against it. She endorsed the deal using militant rhetoric that threatened Iran with war. Her message is that she endorses a deal that gives Iran near zero breakout time to the bomb and lets it self-inspect and fund terrorists, but that she’ll be the toughest terror deal supporter you ever saw. No one will be tougher on that deal than her.

This isn’t the first time that Hillary Clinton pulled that particular scam. Trying to get Americans to forget about her infamous “Reset Button” photo, she compared Putin to Hitler. (But if Putin was Hitler, that would have made her Neville Chamberlain or, considering her politics, Vyacheslav Molotov.) It was over the top and even the media took her to task for it.

Her Iran speech is equally over the top. It tries and fails to cloak her support for a deal that lets a terrorist regime get the bomb by sounding like she’s about to drop the bomb. Like Dukakis trying to channel Patton, it’s an awkward fit. But “Tough Foreign Policy” Hillary is her brand. It’s how her associates have been positioning her.

When Hillary Clinton mocks Putin, you’re supposed to believe that she would be tougher on him than Obama. In her Brookings session, she explicitly drove that point home, in her usual lawyerly style, by contending, “I am in the category of people who wanted us to do more in response to the annexation of Crimea and the continuing destabilization of Ukraine.”

Why couldn’t Hillary Clinton actually stand up to Putin? The unspoken suggestion is that it was Obama’s fault. The only thing keeping Hillary from marching the Russians out of Ukraine was Obama.

But the “Reset Button” was Hillary Clinton’s idea. When asked about it, she had said, “I thought it was a brilliant stroke, which in retrospect appears even more so.”

If you can follow Hillary’s reasoning, her appeasement of the man she compared to Hitler was a “brilliant stroke” of genius, but the only thing keeping her from getting tough on “Hitler” was Barack Obama.

The only person who could possibly believe that is either a deluded idiot or a compulsive liar.

Comparisons to Chamberlain and even Molotov appear unfair. A more accurate analogy might be to Petain who at his trial insisted that his collaboration with the Nazis had helped the Allies win the war.

Hillary’s Iran deal speech offers more of the same schizophrenic worldview in which she promises to get tough on her own appeasement.

She began back-channel talks with Iran, even though she had opposed it while running for office. But her opposition was just another Clinton lie. It was Hillary who agreed to let Iran enrich its uranium, formerly one of those red lines that her administration would discard like confetti at a ticker tape parade.

Just like she did the last time she ran for office.

Hillary Clinton is trying to have her uranium yellowcake and eat it too by pulling a bait and switch. The foreign policy basis for the deal is reapproachment and alliance with Iran. Hillary Clinton is selling the deal as a means of fighting Iran. Before Hillary’s speech, former Secretary of Defense Leon Panetta, a Clinton loyalist, defended the deal in the same terms as a means of putting pressure on Iran.

Panetta’s description of the deal had no relationship to reality. It was just prep work for Hillary’s brand.

When you remove sanctions from a terror state, that isn’t a way of stopping its terrorism.

But in “Only a Clinton” style, Hillary Clinton has decided to invent her own imaginary Iran Deal and campaign on it. It’s a better choice than trying to campaign on the real deal which only 1 in 5 Americans supports. It won’t fool Iran, but it might fool some of her dumber Jewish donors.

And that’s what it’s really all about.

Hillary Clinton wants to break from Obama in style rather than substance. Her occasional criticisms infuriate Obama, whose skin is even thinner than hers, but they are never more than stylistic. She doesn’t differ with specific actions. Instead she talks about attitudes and organizing principles.

“Yeah, if I were the prime minister of Israel, you’re damn right I would expect to have control over security,” she barks to Jeffrey Goldberg. But then she rushes off to apologize to Obama at a ‘hugging summit’. That theatrical “damn right” comes from the same woman took Abbas’ side over Netanyahu and whose husband had taken Arafat’s side over Netanyahu. Their backing for the PLO destroyed Israel’s security and took the lives of many Israelis and Americans.

But it’s not hard to see where Hillary gets it.

Bill Clinton told a Jewish audience at a charity dinner that if Israel were invaded, “I would grab a rifle and get in the trench and fight and die.” Then he claimed that there was no military solution to terrorism. Only a Clinton.

Hillary’s Iran speech just borrows Bill’s “rifle” by vowing that she “will not hesitate to take military action if Iran attempts to obtain a nuclear weapon.”

Iran has been trying to obtain a nuclear weapon for a long time now. That’s been the entire purpose of its nuclear program. Hillary Clinton’s hesitation on Iran’s nukes has lasted for decades.

It’s not just that Hillary Clinton is lying. We expect to be lied to be politicians, especially if their last name is Clinton. It’s that she’s trying to sell a third Obama term by dressing it up in combat boots.

Americans hate Obama’s foreign policy. They hate the Iran Deal. They hate that the world is melting down and that their government can’t seem to do anything about it. Instead of offering real change, Hillary Clinton is promising a tougher foreign policy that is the same old policy, but tougher.

Hillary Clinton will still let Putin walk all over her, but she’ll also compare him to Hitler and do mocking imitations of him. She’ll still pressure Israel to open checkpoints and make infinite concessions, but she’ll occasionally offer a “damn right” when addressing a Jewish audience. And she’ll hold on to the Iran Deal, but make more empty threats of military intervention… at least during her elections.

“We should anticipate that Iran will test the next president. That won’t work if I am in the White House,” she boasts. But Iran has already tested Hillary and found her wanting. When she gave up on uranium enrichment, the race to pile up American concessions to the terrorists was on. Everything else was anticlimactic.

According to Obama, ISIS "No Existential Threat"?