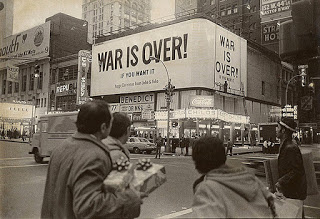 The National Intelligence Council has predicted that Islamic Terrorism will end by 2030. Around the same time we’ll all be eating food pills, driving flying cars and living entirely in an imaginary world.

By 2034, the last murder will have taken place and by 2042, a scientific cure will be found for crime. By 2051, even bad thoughts will have been eliminated, and by 2062, work as we know it will be abolished and everyone will mediate all day on the serious questions of life. “Why are we here? What is our purpose in life? How can there be a National Intelligence Council so devoid of intelligence?”

In the real world, by 2030, there will be thousands of emirates, many no more than small terrorist groups, but some of which control sizable territories. Some of these emirates will pledge allegiance to a single Caliphate like ISIS. Others will try to get big enough to turn into their own Caliphate.

There will be a hundred miniature Afghanistans fought by international peacekeeping forces composed of a combination of local forces and NATO troops try to push out the bands of Salafi holy warriors, and their pirate camps, brothels and drug labs. There will be drones over the skies of a hundred deserts fighting Toyota pickup trucks with bands of hooded men firing machine guns. There will be wire transfers from a dozen Islamic finance institutions wending their way from the great oil economies of the Persian Gulf and American soldiers, who have never seen a conventional war fought in their lifetime, heading in on another rescue mission into the territory of a Terror Emirate.

The United States of 2030 will fight some of these emirates, ignore others and try to claim that some of them are moderate. Clinton tried to work with the Taliban. Obama backed the Brotherhood. By 2030, the smart men and women who got us into this will conclude that the best way to fight some of these caliphates and emirates is to pay them protection money to fight the other caliphates and emirates. We’re already doing that in Syria. Eventually we’ll begin doing it everywhere.

In Benghazi, Hillary Clinton was paying protection money to an Al Qaeda ally for security. Today, Europe decided to pay protection money to the state sponsors of terror in Turkey. By 2030, we’ll stop pretending that it’s foreign aid and start calling it what it is. Or maybe we’ll go on lying to ourselves.

Western countries are already paying their Jizya as foreign aid, trading cash for the promise of stability. The United States and its allies have paid out fortunes to Afghan and Iraqi militias during the past two wars. And that doesn’t even begin to take into account the sheer amount of money spent on development in the Muslim world. It is likely that the United States has spent more on Jizya, the traditional protection money payment of the non-Muslim Dhimmi to the Islamic State, than every other nation had throughout all of history. And that’s just the down payment on the big bill.

Back when the Marines first saw action against the Barbary pirates, most nations found it easier to pay than fight. Jefferson’s “Millions for defense, but not one cent for tribute” set us apart. The Marines came into being because America decided to invest in defense instead of protection money. But defense today is so tangled with tribute that it’s hard to tell the two apart.

There are countless such private deals that have been made already and there will be countless more made to allow Western countries, and their companies and NGOs to function in territory controlled by Islamist Emirates. And that territory will include international shipping lanes.

By 2030, most countries will have come to view Islamic terrorism as a strategic asset, the way that Saudi Arabia does. They will recognize that the only way to transform the strategic liability of Muslim terrorism into an asset is by funding it and aiming it at their enemies. Islamist militias, will gain valuable experience, training and weapons by serving as the barbarian armies of a decaying West that they will use to conquer the West, the way that the Goth ancestors of Westerners did.

The America of 2030 will spend nearly as much trying to buy off the Muslim world as it will spend on trying to kill terrorists. We will continue financing the terrorism that we are trying to prevent while appeasing our killers. American soldiers will be stationed around the world in a hundred little undeclared wars, building generators for sullen villages before coming under fire from them.

The war will be endless. Both sides will hate it and will perpetuate it anyway.

Imagine the conflicts of the Cold War if instead of Moscow, there had been a thousand decentralized Communist dictatorships across the world with no central enemy to fight, and if the Viet Cong were coming out of Oakland. Imagine the Drug War if the drug lords were aspiring feudalists fighting for a world government that would turn us into their serfs. Imagine World War II if the Nazis were a religion that anyone could convert to and immediately become a member of the master race with the right to rob, rape and kill anyone from the inferior breeds.

By 2030, Europe will be a police state fighting terrorism by eliminating privacy, deploying soldiers in every city and criminalizing dissent. The EU police state will be able to access the contents of any mobile device at a click. Even speech that is still permitted today will lead to prison sentences at worst or at best, mandatory reeducation at special centers organized to combat extremism.

The bombs will still keep going off, but they will be a nuisance. Europeans will learn to adapt to the occasional suicide bombing the way that Israelis have. A bomb will go off, the survivors will be carted away, the broken glass will be swept up and the television will praise the refusal to give in to extremism and hatred, while prominently featuring the half-hearted condemnation of a local cleric.

The No-Go Zones will grow and slowly turn into emirates. The authorities will make deals with the local gangs, who will act as Islamist militias. There will be lashes and honor killings in the formal setting of Islamic law and no one will pay attention. Urban and suburban enclaves will eventually become indistinguishable from Gaza. By 2030 the first crude homemade rocket, made with plans offered on the internet, may rise into the Parisian sky aimed at the Eiffel Tower.

But there will be immediate half-hearted condemnations.

Like Europe, the United States will operate a paranoid surveillance state that its critics decry, even while both the state and its critics support the migration that makes it mandatory. There will be terrorist attacks, some thwarted, some not, including possibly one big one, when an Islamic terror group finally gets its hands on chemical or nuclear weapons from one of the Islamic states.

The America of 2030 will sink half its intellectual capital into praising Islam while the other half will be spent trying to find more elegant ways to kill Muslim terrorists. Homo Americanus circa 2030 will be a veteran of two dozen wars in the Muslim world and of two thousand television programs, museum exhibits, books, movies and high school classes celebrating Islamic religion and culture.

Western leaders, like their ancient Roman counterparts, have come to admire the virtues of the savage more than the virtues of their own civilization. By 2030 it will be clearer than ever whether the outcome of their bloody halfhearted campaigns to civilize the savages with doses of democracy and civic institutions will have led to civilized savages or the savaging of civilization.

In 1969, John Lennon and Yoko Ono put up billboards with the message, “War is Over! If you want it” to protest against the Vietnam War. Will terrorism end by 2030? It will if we want it to.

There are two sure ways to end a war; either by winning it or by losing it. The world’s most famous cokehead and mental patient duo meant the latter when they offered their Viet Cong Christmas greeting, but winning wars is still an option. It just isn’t the option that we’ve chosen.

If we want our civilization to end there, all we have to do is to keep on doing what we’re doing.

We know how to win wars. We don’t lack the tools or the skills. We lack the conviction. We aren’t trying to win the hearts and minds of the enemy because we know we’re right. It’s a strategy born of a lack of confidence. We don’t believe in ourselves. We need the enemy to affirm our morality.

The United States does not lose wars except when it loses the conviction and unity of its purpose. To win, we have to believe that we have a nation, a culture and a people worth protecting. The enemy believes that. It believes that enough to destroy us. If we believed it, the war would already be over.

Islamic terrorism is over if you want it. We have the power and the skill to end it at any time. What we lack is the faith that we are worth fighting for.