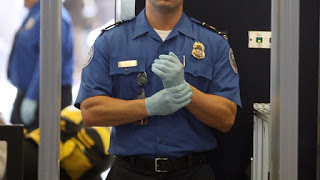 The public argument between Apple and the FBI over cracking the encryption on an iPhone used by the San Bernardino Muslim terrorists is one of those ongoing civil liberties debates that negotiate the terms on which we are asked to sacrifice our civil liberties for the sake of Muslim immigration.

We have already made a thousand accommodations and we will make a thousand more. There will be more databases, naked scanners, eavesdropping, vans that can see through walls, backdoors to every server, registrations, warrantless searches, interceptions and regulations. There will be heavily armed police on the streets. And then curfews and soldiers. These things exist in Europe. They’ll come here.

Some libertarians will argue that we should have none of this and no restrictions on immigration. That we should just shrug off each terror attack and move on with our lives.

Eventually though there will be a terror attack that we can’t shrug off and that can’t be minimized by using the cheap statistical trick of comparing Terror Attack X to the number of people who die every year from cancer. Or there will just be an endless parade of daily attacks, bombings, stabbings or shootings, as in Israel, which create a constant climate of terror that will preclude any hollow rhetoric about the number of people falling off ladders each year or getting struck by lightning. Some hawks will cheer every terror fighting measure short of closing the door on the root cause of the problem. They would rather see every American wiretapped, strip searched and monitored every hour of the day then just stop the flow of Muslim terrorists into this country.

The encryption methods of an iPhone, like the question of how many ounces there are in your tiny bottle of mouthwash, would not be much of an issue, if Muslim migration did not make it one.

Terrorists adapt to the terrain. They use the native population as protective coloration. They can find a way to transform a shoe, a tube of toothpaste or instant messaging on a game console into a terror tool. Just as the left can ‘politicize’ everything, Muslim terrorists can ‘terrorize’ everything. When everything is a potential terrorist tool, then there can be no such thing as privacy or civil rights.

Muslim immigration is forcing us to constantly choose between our lives and our civil liberties. It’s a Catch 22 decision with no good choices. Terrorists push governments toward totalitarianism so that their own alternative totalitarian state starts to seem like a less terrible alternative. But the refusal to fight terrorism also makes the totalitarian state of the terrorists more viable.

With every Muslim terror attack, successful or only attempted, they win and we lose. The pressure of terror attacks discredit Western ideologies and worldviews, both on the right and the left. Each attack helps generate new converts for Islam and more political influence for Islamist organizations.

Vociferous debates over the choice between civil liberties and security make it seem as if we have to choose between our worldviews because something in our society is the problem. It isn’t.

We do not have an American terror network problem. The Amish aren’t using iPhones or obscure apps to coordinate terror attacks. We have a Muslim terror network problem. It’s not because of the Methodists that we have to weigh our mouthwash or take our shoes off and put them in a greasy plastic tray at the airport. It’s because 19 Muslims entered this country, hijacked our airplanes and murdered thousands of Americans. Guantanamo Bay is not an issue because Buddhists are at war with America. It’s an issue because Muslim terrorists are at war with America.

We do not have an iPhone encryption problem or a shoe problem or a mouthwash problem. We have a Muslim terror problem. Whatever decision is made about iPhone encryption will not be the last word. The simple reality is that privacy carries too high a price as long as we have large numbers of people in this country who want to kill us in equally large numbers. If we want our privacy back, it’s not the FBI that is standing in our way. It’s the religious organizations that are paid to bring Muslim “refugees” to this country. It’s the liberal, libertarian and even conservative voices that think there is something wrong with pausing the mass migration of the group that is disproportionately responsible for our terror problem. It’s the media that would rather discuss anything and everything than discuss the problem we are really dealing with.

The source of this problem is not whether the FBI handled the iPhone correctly or whether Apple should be obligated to build a way for law enforcement to access its devices. These arguments would exist even without Muslim terrorism, but they would lack the same level of life and death urgency.

This is not an iOS problem. It’s an immigration problem.

Instead of discussing the Islamic root cause, we put stress on our own competing institutions, technology providers face off with law enforcement, hawks and civil libertarians berate each other as if they were each part of the threat. But we are not the problem here. They are the problem.

The only backdoor that should be at issue here is the one that Muslim terrorists use to enter America. We don’t need to violate everyone’s rights to close it. We just need the political will to do the common sense thing and shut down the source of the threat. Either that or give up on our privacy.

Ongoing Muslim migration makes a police state inevitable. But to avoid the perils of profiling and the appearance of discrimination, it will be a universal police state that will strip away rights from everyone without regard to guilt or innocence in the hopes of averting the next Muslim terror attack.

How Islamic Blasphemy Laws Are Undermining America's Freedom of Speech