After Bernie Sanders visited the Marxist Sandanista regime in Nicaragua on a propaganda tour, he argued that the bread lines in major cities were a good thing. “American journalists talk about how bad a country is, that people are lining up for food. That is a good thing!” 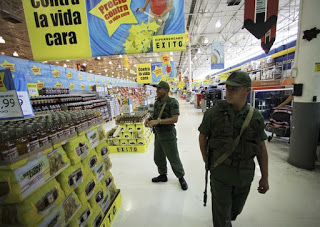 The bread lines had been caused by the radical regime’s socialist agricultural policies of land seizures from farmers. Those farmers who refused to be drawn into Soviet-style communal farms rebelled, along with Indian and Creole racial minorities, and became the core of the Contras, the heroic resistance fighters whose mass murders at the hands of Sandinista terrorists were cheered by American leftists.

What had been productive farmland vanished into a warren of newly invented government agencies run by leftist university graduates with no agricultural background obsessed with seizing land, but with no idea of how to run it. The remaining farmers were forced into grinding poverty by a government purchasing monopoly while the profits went not to their farms, but to the political class of the Sandanistas who lived in luxury while farmers fled and city workers waited on bread lines.

Think of them as the Bernie Bros of Nicaragua. Except they wore khaki fatigues, not pajamas. And instead of angrily tweeting, they marched their victims into churches and set them on fire.

“You don’t necessarily need a choice of 23 underarm spray deodorants when children are hungry in this country,” Sanders sneered last year.

But it’s the scarcity that the smelly Socialist is shoving at Americans that leads to children going hungry. A choice of 23 underarm spray deodorants means a lot of jobs manufacturing, marketing, stocking and selling them. Those jobs, not Bernie’s self-righteous posturing, allow parents to feed their children.

Children aren’t going hungry in America because we have too many types of deodorant, but because too much of our manufacturing backbone was destroyed by leftist redistributionist policies. 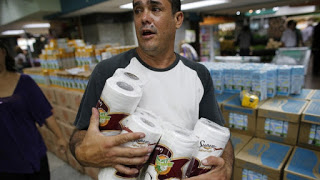 This would be the largest tax increase in American history outside of a war. But some days it seems as if Americans have lost a war without a shot being fired and that these are the wages of the occupation.

The Sanders socialist top tax rate proposal goes to 54 percent, but in the past he has favored a 100 percent tax rate. Back in the seventies, he proposed to “make it illegal to amass more wealth than a human family could use in a lifetime” and to seize any income over one million dollars a year.

That would effectively get rid of the underarm spray deodorant factories, not to mention most other manufacturing jobs and agriculture with it. It’s a formula for creating bread lines along the same lines as the Marxist regimes that Bernie Sanders admired.

Sanders was still pushing a 100 percent tax in 1992. It’s a safe bet that his current tax hike proposals are a starting point for massive redistribution from all classes, from the top to the bottom, to the political class of the government that he represents. Given the opportunity, he will get to 100 percent.

Even before all that, Sanders is pushing a carbon consumption tax. Carbon taxes effectively raise the prices of everything, stealing from working families from the supermarket to the job market.

Food prices have already risen sharply under Obama. The dirty secret of the carbon tax is its impact on the price of food. And if that isn’t bad enough, environmentalists have been salivating over the idea of a special tax on what they call “greenhouse-gas-intensive food” which would permanently put meat out of the reach of working families. To the left, such a brutalization of the working class is its most attractive feature.

CBO accounting found that the regressive carbon hoax tax hits low income families hardest. That should bury the myth that Bernie Sanders is fighting for the poor. Liberals fight for the poor the way that KFC fights for chickens.

As the Tax Policy Center analysis puts it, Bernie’s big carbon tax would force “households and businesses to take account of the environmental costs of their activities.” The Big Green beatings will continue until the morale of the workers improves.

The left claims that its carbon tax schemes will offer all sorts of aid to the poor. But what that really means is shoving more working families onto public assistance. Like the Sandinistas, their solution to the poverty and food crisis they want to create is to take away more jobs and add more bread lines.

And we already know that Bernie Sanders is a big fan of bread lines.

Poor workers would lose hours and jobs. Savings would be discouraged. Lower real wages would destroy the future of working families even long after Bernie has gone to the big red gulag in the ground.

And then there are the farms that grow the food. Depending on how a carbon tax is structured, it could hit farms hard. That’s why even the leftist governments that have implemented this harsh tax have generally added exemptions for agriculture to avoid the kind of food disasters that comes from hammering the food supply with a hoax tax. It’s not clear whether Sanders would do so as well.

Farms have already been suffering from environmental policies. A carbon tax could destroy farming the way that the socialist schemes of Sanders’ Sandinistas destroyed agriculture in Nicaragua.

And then the bread lines would be all too real. But there would be no bread.

While Bernie Sanders blathers about billionaires in every speech, his tax plan shows that the Socialist is coming for everyone’s money. Even those at the very bottom of the income tier would still be losing 1.3 percent of their after-tax income, money that many working families cannot afford to give up to Bernie. 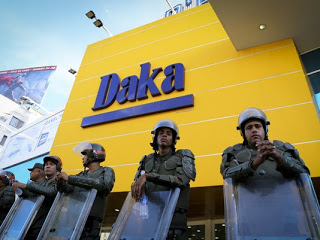 “The basic truth of politics is primarily class struggle,” Bernie Sanders has said. And he’s almost right. Politics has become the struggle of working Americans against the political class. Bernie Sanders is the prototype of a political class of lazy unemployable shiftless parasites at war with the working class. Like the Sandinistas and every other leftist group, he wants to seize money from people of every economic class who actually work in order to invest it in his big government schemes for the political class.

Bernie Sanders has said that, “Democracy means public ownership of the major means of production”. He has touted support from Marxist economists and proposed redistribution of income as the answer to everything. An admirer of Cuba and the Sandinistas, he has learned nothing from their mistakes and proposes to destroy our economy just as his fellow Socialists destroyed theirs in Latin America.

Sanders supporters who feel the Bern dreaming of all the free stuff they will get might want to look at history and ask themselves whether they will end up standing on one of Bernie’s bread lines instead.