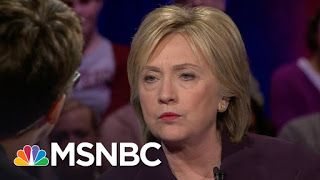 If a state doesn’t vote for Hillary Clinton, it’s racist.

That’s the label that poor New Hampshire, the state just too white to appreciate the virtues of a white woman with dyed blonde hair who occasionally puts on a bad fake southern accent and switches from loving the Yankees to hating them, was stuck with after turning her down.

Sensing trouble up the road in Nevada, Clintonworld tried to accuse Nevada, a state with a sizable Latino population, of also being too white for Hillary. Then once Nevada voted the right way, its was suddenly just right enough.

Ex-Salon boss Joan Walsh suggested that Hillary Clinton was losing white voters because of second-hand racism from her time working for Obama. She’s losing men because they’re sexist and she’s losing women because, according to Gloria Steinem, they’re going ”where the boys are”. It won’t be long before the handful of black people who vote for Bernie Sanders are accused of “acting white”.

Hillary Clinton has turned into Tonya Harding; an obnoxious criminal who can’t stop making excuses, while towing around Bill Clinton as her Jeff Gillooly to kneecap her opponents with awkward attacks. After trying and failing to run on experience, the only thing she’s running on now is identity politics. And her campaign has tapped into the most repugnant and obnoxious politically correct smears.

If you don’t vote for Hillary Clinton, you’re a racist. If you’re a woman who doesn’t vote for her, you’re going to hell. If you ask her about her illegal email server or her speaking fees, you’re sexist.

Senator Shaheen, a Clinton proxy, claimed that questions about the huge pile of speaking fees paid to the Clintons by special interests and even foreign governments were sexist because, “How many men who are running for president have been asked about the speaking fees they’ve taken?”

The Clintons pulled in $153 million in speaking fees. Nobody in this election is anywhere close.

If criticizing Hillary Clinton for taking millions of dollars from special interests is sexist, there is no such thing as a legitimate non-sexist criticism of her. And that’s the whole ridiculously cynical idea.

Any and every criticism of Hillary Clinton is racist or sexist. Clinton supporters now shout sexism or racism first and ask questions later. Salon’s Amanda Marcotte accused a female Hillary Clinton supporter of being a “male Clinton hater” who has “issues with women” because of an unflattering painting. That type of casual smear has become the engine of a desperate and paranoid political identity campaign.

Hillary Clinton wanted to run on experience, but by her second primary her campaign was frantically rolling out a victimhood narrative about mean Bernie Bros who, according to accused rapist Bill Clinton, had been really mean to Joan Walsh by pointing out that her daughter works for the Clintons. According to Walsh, accusing her daughter of getting the job based on family connections is “stunningly sexist”. Someone might want to tell former NBC correspondent Chelsea Clinton who was being paid $600,000 a year to interview the GEICO gecko for reasons having nothing to do with her last name.

Interfering with Hillary Clinton’s sense of political entitlement is also “stunning sexist” since her political career is based on little more than nepotism. Chelsea made a mere $600K on her NBC gig. Hillary Clinton got paid more than that for three Wall Street speeches. She’s running for the highest office in the country based on an undistinguished career in the Senate, a disastrous term in the State Department and her last name. Without that last name, she could never have moved to New York and gotten a Senate seat for the asking or become the presumptive presidential candidate in two elections.

What was truly “stunningly sexist” was the rash of privileged progressives mocking Senator Joni Ernst for speaking about growing up so poor that she had to wear bags over her feet and then going on to become a lieutenant colonel in the Iowa Army National Guard, while pretending that Hillary Clinton marrying well is a feminist accomplishment that everyone must respect or be charged with sexism.

Tom Harkin endorsed Hillary Clinton in exchange for a “stunningly sexist” job for his daughter. Meanwhile he mocked Ernst as Taylor Swift. That was actual real life sexism. Hillary and her backers keep claiming that she is the victim of a double standard. But she is really the beneficiary of one.

The reduction of the Clinton campaign to claims of victimhood is once again evidence of that. Hillary Clinton has cried sexism in every competitive election she has ever been in despite having a track record of destroying the lives of other women. And the media continues to promote her baseless claims of victimhood allowing her campaign to claim that any criticism of her subjects her to a double standard.

Noticing, as Bob Woodward did, that there is “something unrelaxed about the way she is communicating” is sexist. Accused pedophile Lena Dunham contends that calling Hillary Clinton “inaccessible” is sexist. Someone should have told that to the reporters that the Clinton campaign lassoed off behind its moving rope line.

You can’t criticize Hillary Clinton’s speaking style or her speaking fees. She lost New Hampshire because it’s racist. Any other states she loses, is racist too.

According to Hillary Clinton, she can’t be a member of the establishment, despite being a member of the establishment, because she is “a woman running to be the first woman president”. (As opposed to a man or a cleverly disguised robot running to be the first woman president.) That debate response captured the fundamental cynicism of Hillary’s establishment campaign wrapping its wealth and power in the rags and chains of victimhood. And it’s a cynicism that pervades the left whose billionaires are always funding populist campaigns against the 1 percent and someone else’s wealth.

Hillary Clinton is the most powerful and the most admired woman in America who claims that everything is unfair and that everyone is prejudiced against her. The country is in the throes of the final term of a man who thinks the same way and abuses others with that self-serving justification. Hillary and Obama always have excuses for why they are the victims and everything is someone else’s fault. Can the country really afford eight more years of the same thing?

CPAC 2016 Through the Eyes of a First-Timer