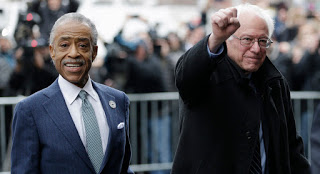 Bernie Sanders hates discussing his Jewish roots, but that hasn’t stopped his lefty Jewish fans from gnawing at the subject like poorly trained puppies chewing on old tennis shoes.

Think Progress claims that Bernie Sanders is a “devout secular Jew”. “Bernie Sanders Is Jewish, but He Doesn’t Like to Talk About It,” the New York Times coughs apologetically. (And the Sulzbergers ought to know.) A Forward editorial neurotically screeches, “We Need To Out Bernie Sanders as a Jew — for His Own Good”.

But Bernie Sanders likes his devoutly Socialist closet. He prefers to describe himself as the son of Polish immigrants. Asked about religion, he disavows Judaism and embraces Pope Francis. The Times has him embracing the description “Non-Jewish Jew” which was coined by a Marxist in an essay explaining anti-Semitism, including the Holocaust, as a “superficial” reaction against capitalism.

Where Obama and Hillary ran on race and gender, Bernie Sanders avoids Jewishness as much as possible. He doesn’t practice Judaism, isn’t part of a Jewish community and avoids the “J” word.

One of the few times he used the dreaded “J” word was when a Muslim activist who cheered anti-Israel terrorism told him that she was afraid of Republicans. Suddenly Sanders puffed out his chest and told her, “I’m Jewish, my father’s family died in concentration camps. I will do everything that I can to rid this country of the ugly stain of racism.”

Considering that the activist, Remaz Abdelgader, had a quote stating, “It would be wrong and inhuman to impose the Jews on the Arabs” and snarled that, “Islam and civil rights issues are mutually exclusive”, that might not have been nearly as reassuring to the former MSA president as he intended it to be.

While Bernie Sanders invoked his last few drops of Jewishness and the Holocaust in support of a Muslim anti-Semite’s crybullying, he didn’t feel the need to do so for the Jewish State when it actually stood on the verge of destruction. Instead he had called for denying arms to Israel before the Yom Kippur War.

In 1971, he told an audience, “no guns for Israel.” Two years later, the Yom Kippur War brought Israel to the brink of destruction and shipments of American arms made the difference. But Bernie Sanders did not care and in 1988 still insisted that, “It is wrong that the United States provides arms to Israel.”

In 1990, he called for America to “put more pressure on Israel”.

Bernie Sanders sneeringly condemns what he calls Republican bigotry, but he endorsed Jesse Jackson despite his racist “Hymietown” slur. Before a joint appearance with Jackson, Nation of Islam leader Louis Farrakhan had warned Jews, “If you harm this brother, I warn you in the name of Allah this will be the last one you harm.” Despite that, Jesse Jackson refused to cut his ties with Farrakhan.

Jackson had told a Washington Post reporter, “That’s all Hymie wants to talk about, is Israel; every time you go to Hymietown, that’s all they want to talk about”. Bernie Sanders however tried to prove he was a good “Hymie” (or a good Non-Hymie Hymie) by defending Jackson’s hostility to the Jewish state.

Bernie Sanders brags about his endorsement from Congressman Keith Ellison despite his past support for the Nation of Islam and his appearance with Khalid Abdul Muhammad who had called Jews “bloodsuckers” and had said, “If you’re a Jew, I’m against you.” Nation of Islam leader Farrakhan, who calls Jews “false Jews”, praised Bernie Sanders as a “real Jew, not a so-called Jew”. The very thing that makes Bernie Sanders seem suspect to Jews makes him more appealing to anti-Semitic hate groups. 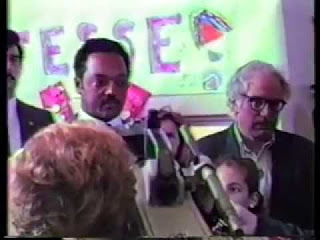 Sanders met with Al Sharpton despite his anti-Semitic remarks and the horror of the Crown Heights Pogrom in which an entire Jewish community was besieged by racist mobs chanting, “Death to the Jews”. The former Democratic presidential candidate had taunted, “If the Jews want to get it on, tell them to pin their yarmulkes back and come over to my house.” Not a problem for Bernie Sanders.

While Bernie Sanders is quick to call Republicans bigots, he not only fails to stand up against anti-Semitism from the left, but he has supported and collaborated with anti-Semites.

And he’s still doing it now.

When Bernie Sanders reached out for perspective on the Middle East during his campaign, he contacted James Zogby, who defended Hamas and Hezbollah, and Lawrence Wilkerson, who had accused Jewish officials of dual loyalty and suggested that Israel was behind Assad’s chemical weapons attacks.

The truth about Bernie Sanders is that he is not Jewish in any sense other than the genetic. He is a left-wing radical who is uncomfortable with any mention of his Jewish background because he does not like Jews. Even his time on an Israeli Kibbutz, a staple with which his Jewish fans nurtured their fantasies of a Jewish Bernie, fell apart when it emerged that his Kibbutz had flown a red flag and admired Stalin and the Soviet Union as part of a radical leftist movement that had initially opposed the creation of Israel.

His first and foremost allegiance has always been to the left at the expense of the Jews.

Bernie Sanders cheered the Sandanista regime whose mobs chanted “Death to the Jews,” “Jewish Pigs” and “What Hitler started we will finish.” He did not invoke the Holocaust when a synagogue was firebombed and in an echo of Hitler’s Germany, its president was forced to scrub the streets.

The anti-Semitic regime that Bernie Sanders supported ethnically cleansed the Jewish population of Nicaragua. It marched the indigenous Indian population into churches and set them on fire.

And Bernie Sanders defended the Marxist terrorist regime that was committing these atrocities.

Bernie Sanders was equally enthusiastic about Cuba and the Soviet Union, two other Communist dictatorships that were persecuting the Jews. Sanders did not see fit to invoke the Holocaust on behalf of Jews actually facing anti-Semitic persecution the way that he has invoked it on behalf of Muslims.

But perhaps he thought that, like the other victims of the left, they were getting what they deserved.

When Bernie Sanders went on his visit to the USSR, there were no more concentration camps in Europe, but there were still Jews locked up in the gulags of the Soviet Union. While he was admiring Soviet youth programs, Jewish refuseniks were still being denied permission to leave the Communist dictatorship. 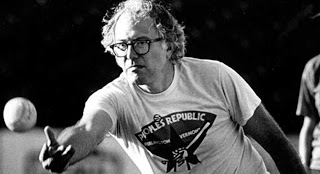 While American official visitors often met with political dissidents, there is no sign that Sanders did so. It would have been out of character for a man who had justified Communist crackdowns on the opposition to have met with enemies of the regime. For Bernie Sanders, the Sandanistas, Castro and the Soviet Union were models to be emulated and victims of capitalist repression by America, Wall Street and its evil corporations. Much in the same way that Muslim terrorism against Jews is excused today.

Bernie Sanders invokes the Holocaust when asked about his Jewish identity, not because he has empathy for Jews, but in a classic leftist maneuver to distract attention from that lack of empathy. His conception of the Holocaust is detached from Jewish suffering. It is purely about his leftist politics.

Surreally he references the Holocaust only to add that it taught him that politics is “important”. The Holocaust has no Jewish meaning for Bernie Sanders. It merely validates his self-importance.

At a Democratic debate, when asked about the historic nature of the election, he avoided saying that the first Jewish president would be as historic as the first female president. Instead he mumbled that it would be his “views” of “taking on the big money interests” that would make him historic.

Uncle of Benghazi Victim Says, "I Lost Respect for Romney in 2012 Debate"