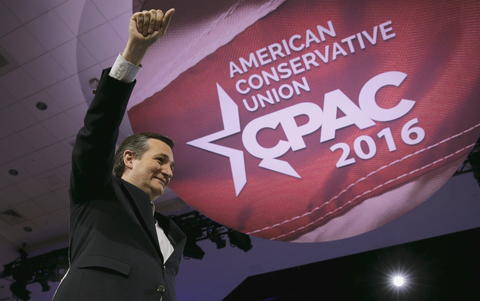 National Harbor, Md. – After a crazy week that saw an intense battle during Super Tuesday and a nasty debate of insults Thursday night, Ted Cruz returned to the annual Conservative Political Action Conference on Friday, with an enthusiastic crowd welcoming him with open arms.

Entering the stage to cheers and chants of “Ted! Ted! Ted!” Cruz began his remarks joking on the news of Donald Trump bowing out of appearing at the conference before taking the conservation into a much more serious manner.

Cruz added, “I hope none of you have a degree from Trump University.”

Painting Trump as out of touch with the conservative base, a base that has helped him propel as a top presidential contender, Cruz used Trump own talking points to prove his point. During the Thursday debate, Trump noted that his strong stances can be flexible for negotiation, but to a certain extent. “Last night, [Trump] said over and over how flexible he was,” Cruz said. “Flexible in Washington, D.C. means I’m getting ready to stick it to you.”

In order to win a general election, Cruz told the audience how he would frame the election, if he were to become the Republican nominee, based on three things: jobs, liberty, and security. On jobs, Cruz said the “heart of our economy is the small businesses” not Washington D.C. or New York City. To lift the government off “the backs of small businesses,” Cruz said he would abolish the IRS and replace it with a flat tax where taxpayers can fill out their returns on a postcard. He also added how Obamacare has hurt small businesses and promised to “repeal every word of Obamacare.” To replace Obamacare, Cruz promised to pass a “common sense health care reform” that would make health care “personal, portable, and affordable.”

On liberty, Cruz focused on the issue in the context of replacing the Supreme Court seat of the late Justice Antonin Scalia. He told the crowd if Trump were elected, he would appoint a liberal judge because he is willing to compromise with the likes of Senator Chuck Schumer and Harry Reid. “In the debate last week, there was a moment of clarity on this issue,” Cruz said. “[Trump] has been supporting liberal Democratic politicians for four decades. He said when it comes to the Supreme Court, you have got to be willing to compromise and cut a deal with he democrats. If any president does what Donald is promising to do by cutting a deal with Harry Reid and Chuck Schumer to agree on Justice Scalia’s replacement, then we know that replacement will be a left-wing judicial activist who will strip away our rights.”

Cruz added, “Let me be very clear, I will not compromise away your religious liberty and compromise the way your Second Amendment right to keep and bear arms.”

The third issue Cruz touched on was on security, both border and national security. Immigration has become a hot topic of discussion amongst the GOP contenders and Cruz believe immigration is a matter of “law enforcement, national security and an economic issue.” On national security, Cruz promised to be a strong Commander-in-Chief by means of “peace through strength.” If military forces are needed to combat the enemy, Cruz said he would deploy overwhelming force. “America has always been reluctant to use military force. We are slow to anger,” Cruz said. “But if and when military force is required, we should use overwhelming force, kill the enemy, and then get the heck out.”

During the Q&A segment with Fox News host Sean Hannity, Cruz rejected the idea of a brokered convention, stating it’s a dream of the establishment and the only way to prevent this from happening is defeating Trump in the ballot box. “Anytime you hear someone talking about a brokered convention, it is the Washington establishment in a fevered frenzy,” Cruz said. “They are really frustrated because all their chosen candidates, the golden children, the voters keep rejecting. We go to a brokered convention and the D.C. power brokers will drop someone in who is exactly to the liking of the Washington establishment and if that happens, we will have a manifest revolt on our hands.”

On liberals stereotyping Republicans as racist, Hannity asked Cruz on how he would denounce this lie being imposed. “When did it become controversial to say every human being is a precious gift from god?” Cruz asked the audience. “The Democratic Party is unwilling to say the words ‘All lives matter.’ If you want to talk about ‘Black Lives Matter,’ you know in 1990, there were 2,200 homicides in NYC. Last year there were 300.”

Crediting the NYPD for dramatically reducing the murder rate, Cruz went on to add the bravery of the men and women in blue saved thousands of black lives.

“All lives matter, but let me tell you, blue lives matter and we stand with the men and women who protect us.”

11th #GOPDebate Continues With Attacks that Takes a Personal Turn